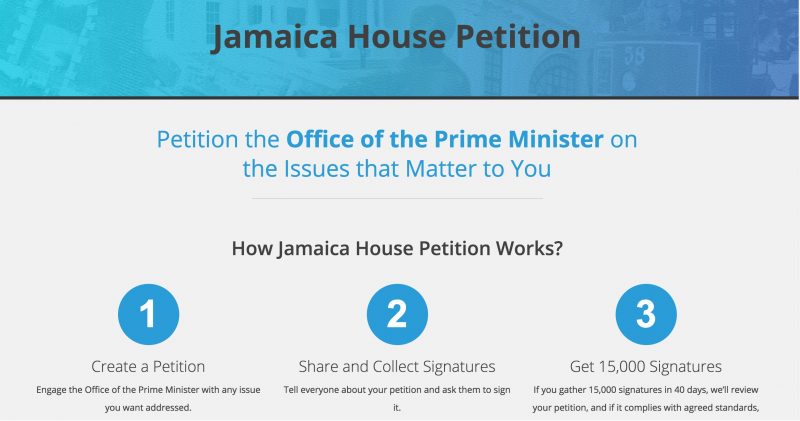 Screenshot of the homepage of the Jamaica House petition website, a new government initiative.

Jamaicans are not, in general, accustomed to signing online petitions. The concept of petitioning the government is not well advanced, with only the occasional petition being delivered to the prime minister's office — in hard copy. In fact, the word “petition” rather conjures up the idea of election petitions when a seat is closely contested, or a petition for a US immigrant visa.

So, when the Office of the Prime Minister (OPM) officially launched [2] the Jamaica House petition site [1] on July 24, 2017, there was little more than a flicker of interest and not much public comment.

There are currently 26 petitions on the website — some of them quirky and others rather obscure. Causes range from making a popular dub poet [3] a national hero to banning [4] all white supremacy groups from Jamaica. There's even one suggesting the abolition [5] of all traffic lights.

Petitions have a life of 40 days, within which the petitioner must garner 15,000 signatures or more for it to be considered. The website notes [1]:

If you gather 15,000 signatures in 40 days, we’ll review your petition, and if it complies with agreed standards, the Office of the Prime Minister will issue an official response.

A petition to make revered cultural figure Miss Lou a “national icon” fell sadly short [6]. However, some Jamaicans observed that to succeed with a petition, it must be widely publicised, especially on social media. Academic and commentator Carolyn Cooper took an interest in the site and came to the same conclusion, commenting [7]:

Petitions need to secure 15,000 signatures within 40 days of being launched. That's the only way they are going to be taken seriously. I wonder if the OPM is setting us up for failure. How likely is it that any petition could attract so many signatures in such a short time? How did the OPM arrive at that seemingly arbitrary number? And why 40 days?

Despite the doubts, the environmental advocacy group Jamaica Environment Trust (JET) decided to test the page with a petition [8] to help save Cockpit Country [9], the largest remaining natural forest in Jamaica and a haven of biodiversity as well as a major watershed.

The area, however, is under threat from the mining of bauxite, an aluminium ore. The mining activities there on the island are due for an expansion in order to supply a bauxite factory purchased in 2016 by the China-based Jiuquan Iron & Steel (Group) Company Limited. That factory would be powered by a 1,000 megawatt coal-fired plant, although construction has not gone ahead. In fact, the plans were subject of a petition [10]that garnered 21,000 signatures, which JET printed and hand-delivered to the prime minister's office in October 2016.

In Cockpit Country, there is a strong emotional and historical connection to the rugged limestone landscape, which was where the Maroons hid after escaping from slavery under British rule, where battles were fought and a treaty signed. Maroon descendants who still live there have also raised their voices in protest over the years.

The deadline for the petition to attract the requisite number of signatures is September 30, 2017. Since the petition website went up, a few glitches have occurred. There were complaints from signatories that the website was not responding. The website went “down for maintenance” [11] from around 3 p.m. on September 21, until the following morning around 9 a.m., causing a ripple of concern and many questions. Meanwhile, JET's CEO, Diana McCaulay, reminded supporters:

Everyone, great support for the Cockpit Country petition but please don't say anything personal, offensive or inaccurate #sticktotheissue [12]

Nevertheless, the campaign continued, moving to traditional media on “Save Cockpit Country Day”, with coverage on several radio stations:

Today is Save Cockpit Country Day! We need to #SaveCockpitCountry [14]. Unfortunately OPM petition website is down. But stay tuned! #Jamaica [15] pic.twitter.com/WmE2LDRP7u [16]

An energetic campaign for signatures was waged on Facebook [18] and via WhatsApp:

All Jamaican friends, our Cockpit Country is very important. At present, there are no boundaries set for the place where our water flows from, and the home to much of Jamaica's biodiversity. Please sign this petition and share it for others to sign as well. The government will respond if enough signatures are garnered. You can help. Please, please do.

However, this particular petition has met with some cynicism among Jamaicans. Why has it been so hard to raise 15,000 signatures, some ask? Journalist Rodney Campbell notes that, rather than trying to sway the government, more Jamaicans need to be persuaded of the cause:

Another doubted the effectiveness of online petitions:

15,000 signatures will not stop a government from doing anything.

A common argument was, “Why is a petition to the government even necessary? The government should know that this is wrong”:

As with everything in Jamaica, politics has been a part of the debate over Cockpit Country, which has lingered for a number of years. Opposition Leader Peter Phillips tweeted a video urging Jamaicans to sign the petition:

The people have spoken & they don’t want any mining done. Democracy is in the hands of the people. #JamaicaFirst [22] #aJamaicaThatWorksForAll [23] pic.twitter.com/4bEkzTESP8 [24]

Why didn’t u have interest in this matter before now? Why didn’t you encourage your government to define the boundaries after so many years.

Despite all the squabbling, signatures continue to pour in. On the evening of September 22, the petition surpassed the required 15,000 signatures. Jamaica Environment Trust shared on Facebook [27]:

Thanks to everyone who supported the Save Cockpit Country petition and helped us reach the target of 15,000 signatures. The petition remains open for signatures until September 30. Let's send our nation's leaders a clear message. We encourage everyone to continue to learn more about this issue and share the information and petition with your friends, families and colleagues. Stay tuned to JET's social media for further updates #savecockpitcountry [28] […]

Meanwhile, the Prime Minister has responded to the high level of public support for the petition. On September 25, he posted on his official website [29]and social media:

The Office of the Prime Minister wishes to congratulate the Jamaica Environment Trust and other Jamaicans who worked together to ensure the success of the ‘Save Cockpit Country’ petition [and] wishes to advise that, as was committed, the government will officially respond […] within thirty (30) days to address the issues and concerns brought by the petition.

While the petition itself may have reached its goal, the issue of Cockpit Country remains on the table, but perhaps the end of this long-running story may be in sight. Meanwhile, will this success encourage others to support the petition website? That remains to be seen.