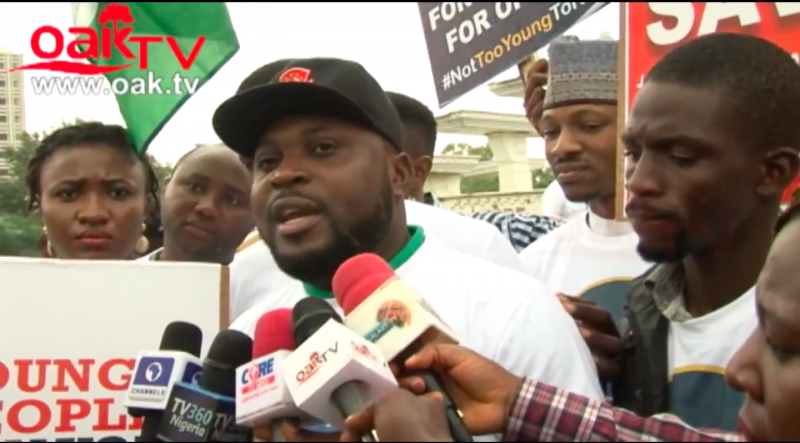 “We believe in the idealism, in the strength of young people” – Moses Siasia during the #NotTooYoungToRun March. Screenshot from an Oak TV report.

Nigerian law sets minimum age requirements for certain government positions. For example, presidents cannot be younger than 40 years old, and members of the House of Representatives must be at least 30.

Many of the country's youth view these limits as unfair. Citizens who are 18 years or older are eligible to cast a ballot in elections, so the thinking goes, “If we can vote, then we can be voted for.”

Enter the Not Too Young To Run bill, which is gaining momentum as it makes its way through Nigeria's legislative process.

Sponsored by Tony Nwulu and Abdul-Aziz Murtala Nyako, members of Nigeria's House of Representatives and the Senate respectively, the draft law seeks to alter Sections 65, 106, 131, and 177 of the 1999 Constitution of the Federal Republic of Nigeria. It would reduce the age qualification for the office of the president from 40 years to 35 years; governor from 35 to 30; House of Representatives from 30 to 25; and State House of Assembly from 30 to 25.

It was originally introduced on June 7, 2016, and so far has passed the House of Representatives and the Senate, and received the endorsement of the Economic Community of West African States (ECOWAS).

But for it to become law, 24 State Houses of Assembly will need to vote in favour. State-level advocacy has since begun across the country, and youth are optimistic about the bill's prospects.

Activism has accompanied the bill throughout the process. For instance, on July 16, 2017, a report from online news agency Sahara Reporters alleged a plot within the House of Representatives to scuttle the Not Too Young To Run Bill.

The response from supporters of the bill was swift, with messages flooding social media and marches organized:

Time to save the #NotTooYoungToRun and our right to run for office. Get ready as we visit National Assembly to make our demand. pic.twitter.com/0kmdY5JOMi

I will join other citizens tomorrow as we march to the National Assembly to urge them to pass #NotTooYoungToRun We march for the votes pic.twitter.com/DwykqstT5c

The world is WATCHING The 8th National Assembly. Vote ‘Yes’ to remove age barrier as it would reduce inequality #NotTooYoungToRun #AJStream pic.twitter.com/VnWeETjDyc

The fight to save the #NotTooYoungToRun bill must be all encompassing. Including the youth who currently work for the legislators….

Save the Not Too Young To Run Bill.#NotTooYoungToRun.

The protests received lots of support from youth and civil society organizations. This resulted in a response from the Speaker of the House of Representatives, Yakubu Yogara, who reaffirmed his support for youth inclusion in politics:

The young people should be informed that we made a promise and we will keep to our promise, by God’s grace.

As the bill begins to be considered by the State Assemblies, the mobilization around #NotTooYoungToRun is showing no signs of letting up.