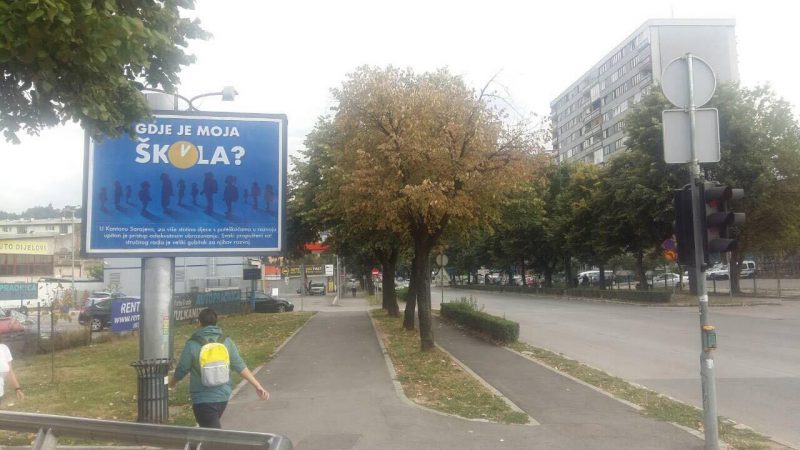 “Where is my school?” billboard in Sarajevo, Bosnia and Herzegovina. Photo courtesy of #WhereIsMySchool campaign, used with permission.

In Sarajevo, a group of parents is campaigning [1] for adequate preschool education for children with cognitive disabilities. If their #GdjeJeMojaSkola? [2] (“Where is my school?”) effort succeeds, it will be the first of its kind in Bosnia and Herzegovina.

The ethnic divisions [3] in Bosnia and Herzegovina's highly decentralized educational system have long been in the public eye. Meanwhile, little attention has been paid by either decision makers or the general public to a different kind of discrimination, equally pervasive across ethnic and administrative lines: that of children with disabilities, specifically those with developmental disorders.

“Inclusive education” is declaratively accepted as a concept, but has never materialized in Bosnia and Herzegovina’s public education systems, all of them stretched between insufficient resources and political instrumentalization.

Formal education for children with cognitive disabilities starts at first grade (age 7) in one of the country's specialized schools. Very few are enrolled in kindergartens; even for those who are, it means little more than having a day-care service while their parents are at work. Altogether, the system offers little or no prospect for attending a regular school or learning skills needed to lead an independent life.

Enter the organization Education for All (EDUS)

For a small number of children in Sarajevo, those prospects changed seven years ago, when a new organization, “Education for all” (EDUS) [4], started offering early intervention, preschool and school programs for children with developmental disorders. Kids as young as 18 months could complete a full cycle of professional help: a period of observation to assess their level of development; a learning program based on their specific needs to develop their social and cognitive skills; and continuous progress monitoring, serving as basis for program updates and adjustments.

The method, based on behavioral analysis [5], has consistently been showing better results than classic schooling in children with cognitive disabilities. If started at an early age, it can even help prevent the development of some risk-factors, significantly improving the ability of the child to learn and socialize. It is also the only one with confirmed positive results in children with autism.

Word about the program in Sarajevo started to spread, and some parents even packed up and moved from other places to be able to enroll their children. Sanela Lindsay, EDUS secretary general and a mother of 15-year-old Haris, who has autism, explains:

More and more parents of the new generation refuse to accept the social stigma that comes with developmental difficulties, and reject the misguided notion that they have to carry all the weight themselves. Once they realize they need help, they quickly learn where to find it. They want the best for their children and the results of these programs speak for themselves: so far, 35 have successfully entered regular schools.

The number of applications soon grew to the point where it surpassed the organization's capacities. EDUS reached out to the cantonal authorities for institutional support to expand, desiring a space to accommodate all the children on the waiting list, and adequate staffing to maintain the same quality of work.

A temporary solution was found in 2015, in the arrangement made with the Ministry of Education of Canton Sarajevo, which allowed 26 children aged 4-7 to attend the preschool programs in the facilities of the Mjedenica Institute for Special Education, who co-financed the salaries for the new EDUS-trained educators.

A space for another 33 was provided in the elementary school Vladislav Skarić, contracted by Mjedenica. Additional 35 school-age children were enrolled in Mjedenica, and 22 children under 4 attended early intervention in Vladislav Skarić.

This still wasn’t enough to cover everyone on the waiting list. In the spring of 2016, the cantonal prime minister, Elmedin Konaković, and minister of education Elvir Kazazović, visited EDUS and promised to find a sustainable solution [6] within the public education system. More than a year has passed and, instead of a solution, the parents received disheartening news: Mjedenica announced that it lacks resources to renew the contract. The cooperation would be discontinued [7], leaving the parents to their own devices.

The council of parents and EDUS representatives spent the summer of 2017 trying to negotiate a solution with the cantonal ministry. A municipality in Sarajevo offered an empty school building, but the ministry never did the paperwork to register it as a preschool institution. Two days before the school started, the minister was still vacationing, unresponsive to all attempts of contact. Watching the only support they had slipping away, the parents started to grow desperate.

‘Where is my school?’

On Facebook, parents started using the hashtag #GdjeJeMojaSkola [8] (Where is my school?) posting photos of their children with explanations about their situation [9] to draw public attention.

“You child is 18 months old and you suddenly notice that he’s different from others,” says Aida Ajanović, whose 4-year-old son Vedad is also on the autistic spectrum.

He’s not learning any new words, doesn’t respond when you call his name. You go to the neuro-pediatrician, he goes through a series of exams and you learn that he has “developmental delays”. And that’s it. You’re stuck there, because nobody knows what to do with such a small child. EDUS was the only one who offered the much needed assistance.

Vedad started attending their early intervention program 2,5 years ago. He is now talking and knows how to express his basic needs. For us, this is an invaluable progress. Equally, each day he misses out on his education – especially at this age, critical for his development – is an irreplaceable loss. 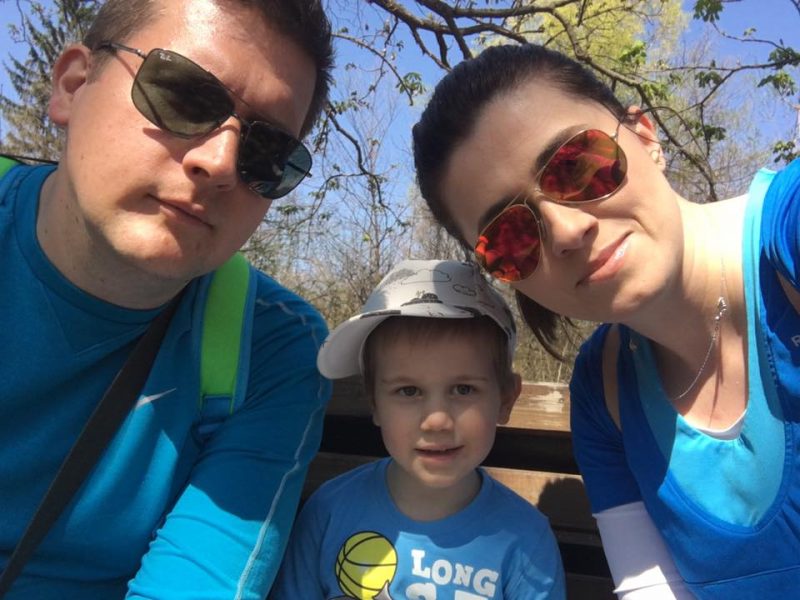 Aida and her husband, along with the other parents, refused to succumb to despair and started to organize. They wrote letters to the cantonal government [10], requesting that their children’s right to an education be respected. They pushed for another meeting, but the minister didn’t show up [11]. They called the media to document it and begun to tell their stories [12]. An advertising company offered them free billboard space.

Their campaign, #GdjeJeMojaSkola? [2] (“Where is my school?”), took to the web [1] and to the streets, informing the residents of Sarajevo that more than a hundred children are at risk of losing the support essential for their growth. In the first week of the 2017 school year, the education of children with developmental disabilities in Bosnia and Herzegovina became a prominent topic [13] for the first time.

They soon saw the first results of the public pressure they built. After weeks of silence, the cantonal government allowed Mjedenica to renew the contract with 14 educators [14]. The institute’s director offered a two-shifts schedule to compensate for the still insufficient staff. The minister of education announced that he’ll make the necessary arrangements to accept the school building offered by municipality Novo Sarajevo [15].

There is, of course, still a long way to go. The temporary solutions are yet to materialize. But even when they do, the parents won’t stop at that. They want the institutional void to be filled permanently, by making preschool education mandatory for children with developmental disabilities and improving the further school education.

They also want to see it done in a way that has proven to work for them, providing their children with the opportunity to thrive like all others. If they succeed in their efforts, it could be a first step to systematically advance the lives of children with developmental disabilities in the whole country.