The Unsung Heroes of the 2017 Floods in Mumbai, India 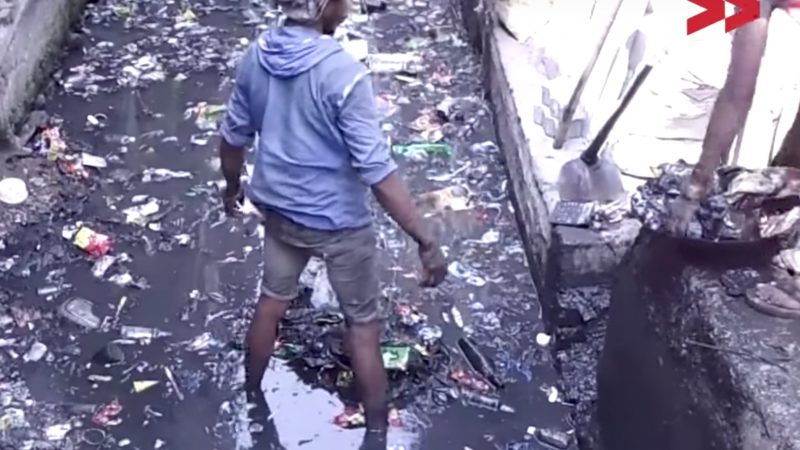 This post was written by Madhura Chakraborty and originally appeared on Video Volunteers, an award-winning international community media organization based in India. An edited version is published below as part of a content-sharing agreement with Global Voices.

Thousands of migrant workers are employed by the Brihanmumbai Municipal Corporation (BMC), India's wealthiest civic body, for the pre-monsoon cleanup every year. The cleanup requires the labor of migrant workers who often work illegally in inhumane conditions, most evidenced during the recent Mumbai floods.

On August 29, monsoon downpours caused havoc in Mumbai, collapsing transport systems in the megacity of over 18 million residents. Nearly two dozen people were killed when a building collapsed after roads were turned into rivers in India’s financial capital.

The floods in Mumbai receded within a day, thanks to the efforts of migrant sanitation workers employed by the BMC.

Due to the lack of proper drainage systems, poor hygiene like open defecation is practiced in India, cleaned mostly by manual scavenging (cleaning human waste by hand) primarily by the lowest caste Dalits.

After decades of campaigning to improve sanitation systems, in 2013 Indian lawmakers passed the Prohibition of Employment of Manual Scavengers and their Rehabilitation Act, criminalizing the practice of employing individuals to clean, carry, dispose of, or handle human excreta manually from dry latrines, open drains, or pits and sewers without protective gear or other cleaning equipment.

However, BMC workers continue to clean manually, without any protective gear.

They don’t touch us because our hands and feet are dirty. They say we stink. They yell at us, hit us, ask us to go away.

Nana Kale recounts how he is treated after cleaning the sewers of Mumbai before monsoons struck. He traveled nearly 500 kilometers with his wife and two-year-old daughter to work in the city-wide cleanup to prevent floods in Mumbai.

Employed by contractors under the BMC, Kale enters Mumbai's sewers without gas masks, protective gloves, shoes or suit. He picks up plastic and solid refuse with his hands and de-silts the drain using a spade and his bare hands. His wife helps him while their daughter plays around in the putrid black water, inhaling the noxious fumes of methane, ammonia and other gases.

She [my daughter] had once fallen inside the gutter. The contractor was right there, but he didn’t do anything. He asked us to keep her away. Where will this child go? says Kale.

In December 2016 the Bombay High Court ruled in favor of contractual sanitation workers under the BMC:

Residents of the city have a fundamental right to a clean environment…But in a welfare state, cleanliness for one class of citizens cannot be achieved by engaging in ‘slavery’ of the others.

The BMC is India’s richest civic body with a budget exceeding 25,000 crore Indian Rupees (3.8 blllion US dollars), causing concerned citizens to wonder why it can't take better care of those who perform this essential job for the city. Activists posit that the BMC treats the lives of these sanitation workers as dispensable because they are Dalits or the lowest caste of society.

Abdul Shaikh, a sub-contractor employed for the clean-up, eloquently explained:

“Modiji talks about Swachh Bharat. But I want to ask this government, is the cleanliness of the streets the only important thing? What about the people who do this work?”

The Swachh Bharat Campaign or the ‘Clean India Campaign,’ championed by Prime Minister Modi, has collected over 90 billion Indian Rupees since October 2016 through a tax introduced to fund its initiatives. And yet, the plight of sewer workers remains unchanged.

Mumbaikars have expressed outrage against the BMC over lives lost in the flood and much is being said about the ‘spirit of Mumbai’. But as Mumbaikars congratulate each other over social media about a generosity of spirit, imagine 12-year-old Anil submerged waist deep in the sewers all day, cleaning up after everyone.

It's not just the noxious gases and putrefying sludge killing migrant workers, it’s the apathy of Mumbaikars who turn their faces away from this human tragedy.