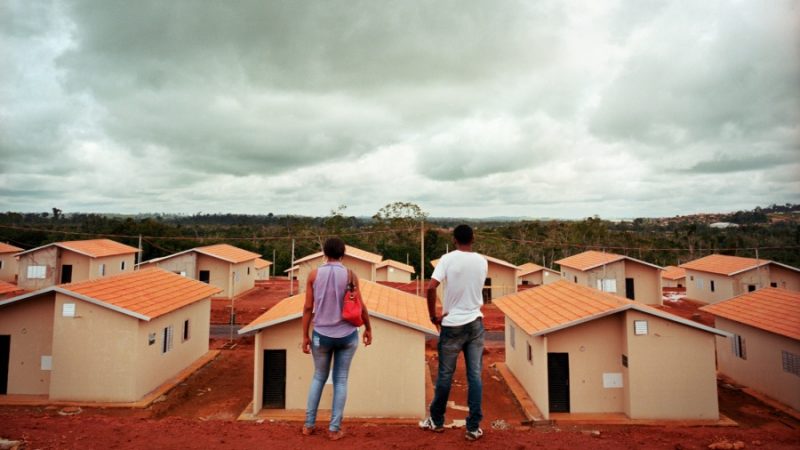 This article by Isabel Harari was originally published on the website of the Instituto Socioambiental (ISA) with whom Global Voices has a content-sharing partnership.

The Belo Monte Dam in Brazil's northern Pará state was granted an operation permit two years ago and is in the final stages of construction. Yet, the hydroelectric plant continues to face accusations of violations of socio-environmental rights.

On Wednesday 13 September, the regional court in Brazil suspended its Licence of Installation (LI) due to the poor housing conditions in settlements built for hundreds of families displaced by Belo Monte.

Criticism of housing irregularities began in 2012 when Norte Energia, the franchisee of Belo Monte, promised brickwork houses of three different sizes, according to family size. However, all the families were resettled in houses of the same size and in concrete. Long distances between the new housing and places of work and study, along with poor conditions such as holes and cracks in the walls, are daily realities regularly criticized by public bodies.

The suspension freezes all work related to hydroelectric plant installation, slated to operate at its full potential by 2019. Norte Energia refuses to recognize the legal power of the decision and stated in a communique that “such a decision does not have an effect since it refers to the LI.”

On Friday 22 September, the same regional court authorized the use of police force if Norte Energia does not comply with the decision and continues its installation work.

Environmental activist Helena Palmquist, based in Pará state, commented on tensions around the decision in a series of tweets:

Norte Energia and the Brazilian government have always said that Belo Monte would save the worm-eaters of Xingu [the river where Belo Monte was built].

They have always flaunted that people would live in the best houses, with the best sanitaiton of the country.

And now, with the plant almost ready, those people have to accept the devastation of their lives as an accomplished fact

Norte Energia has held an operation license since November 2015, which completely replaced the terms of the installation license. This license carries new conditions which haven't been fulfilled and therefore confirms the environmental irregularities of the enterprise. The plant faces four other judicial decisions that could also order the suspension of its operating license.

As of April 2017, a regional court suspended the company’s activities until Altamira's sewage system was improved, yet none have been made. This historic decision was the first time a regional court overturned a security suspension, which had previously allowed the company to continue working without monitoring the fulfillment of its conditions.