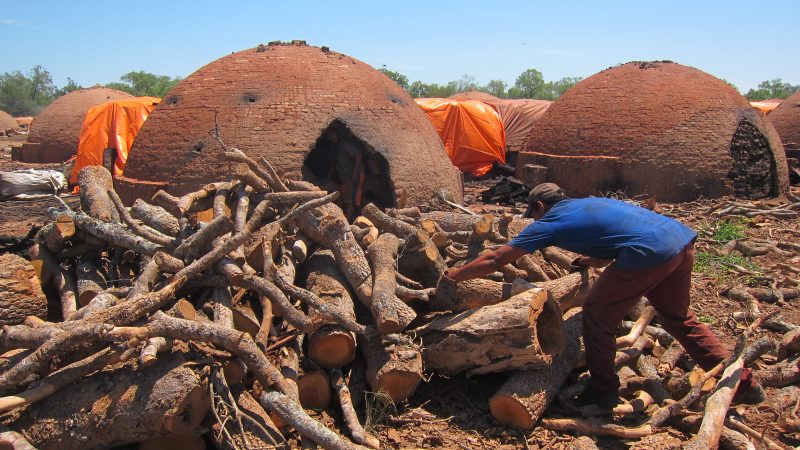 The charcoal that is exported to Europe is produced by harvesting white quebracho trees, a tree typical of the Chaco region. Photograph published in Kurtural courtesy of Earthsight and used with permission.

The following is an English-translation of a Spanish-language article by Jazmín Acuña, originally published by Kurtural.

The Chaco region, which stretches across parts of Paraguay, Brazil and Argentina, has the world's highest rate of deforestation, caused by logging for the production of charcoal and the expansion of grazing land for livestock.

One of the parties responsible for this situation is Bricapar, the largest exporter of charcoal in Paraguay. And it just so happens that the country's minister of public works and communications, Ramón Jiménez Gaona, owns a quarter of Bricapar's stock, according to the British NGO Earthsight.

Undercover investigators from the organization followed the trail of the company's products that are sold in European supermarkets as “sustainable”. But they found a different reality when they arrived at one of Bricapar's charcoal production centers in the department of Boquerón. There they found that the main profits of the company were generated from the indiscriminate harvesting of trees like the white quebracho.

The extensive investigation by Earthsight revealed a business plan that encourages a dramatic deforestation of the Chaco region. Trees are harvested for charcoal, which facilitates the land then being used to raise livestock. This scheme was explained in detail by the manager of the Bricapar production center, located in the town of Teniente Ochoa, where the company obtains the raw material, the wood, and houses its ovens to convert it into charcoal.

The land belongs to Paraguay's Institute of Social Welfare and has been leased to Irasa, a livestock company, since 2008. Irasa has a 20-year contract that allows them to exploit three parcels of 18 thousand hectares — of the 200,000 that belong to the social security organization — and has had permission from the National Forest Institute to harvest forests on the land since 2009. At the same time, the livestock company has maintained a contract with Bricapar since 2012 to cut trees that are then converted into charcoal.

Under this plan, which contributes to an unprecedented environmental crisis, Bricapar has become “the largest producer and exporter of charcoal in Paraguay,” in the words of Sebastián Gorostiaga, Bricapar's sales manager. Their products are sold in supermarkets in Germany, Spain, and England, according to statements by Guillermo Vega de Seoane, executive director of Ibecosol, an intermediate Spanish company responsible for distributing the Bricapar charcoal in the European market.

According to Earthsight's estimates, Bricapar was responsible for half of Parguay's exports of the product in the first half of 2017, and the sales resulted in profits of approximately a million dollars a month. This, at the same time that satellite images show that in the areas where Bricapar has its furnaces in Teniente Ochoa, about 10 football fields’ worth of land are deforested a day, representing a third of all of the logging done in the Chaco region daily to serve Europe's demands for charcoal. The deforestation in the region in general is such that on average seven trees per second are cut down, according to a report by Guyra Paraguay, a non-profit, non-governmental environmental advocate.

Thanks to Earthsight's findings, European supermarket chain Carrefour told The Guardian newspaper that it has launched its own investigation and decided to stop buying products from Ibecosol, an intermediary of Bricapar, in the meantime. Moreover, the German NGO Rainforest Rescue published a petition that has collected over 133,000 signatures demanding that European supermarkets like Aldi, Lidl and Carrefour take “immediate action” to “stop buying charcoal made from the destruction of Paraguay’s forests.”