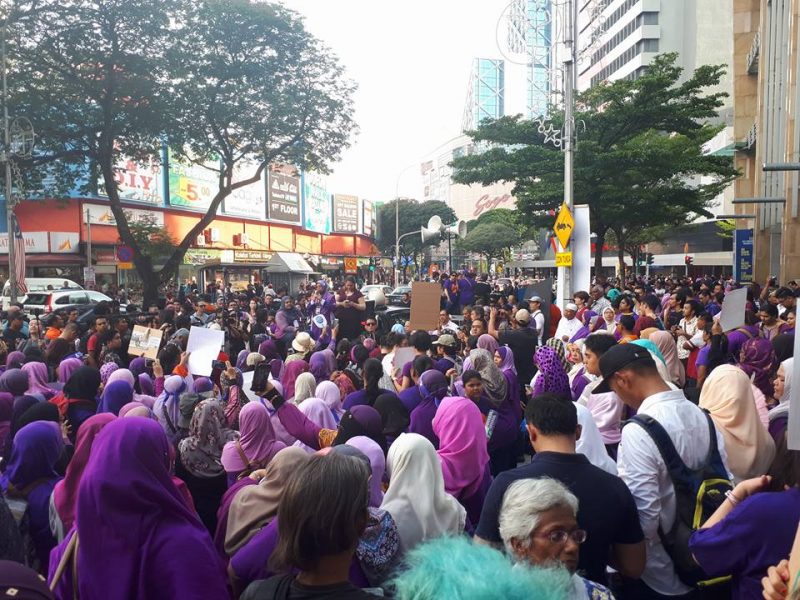 On September 10, 2017, about a thousand women from all walks of life gathered [2] in the Malaysian capital of Kuala Lumpur to take a stand against what they called the rising tide of toxic politics in the country.

The women held a “purple walk” to denounce [3] sexism, corruption, election fraud, racism, and violence against women. Speakers during the rally highlighted [4] the low representation of women in politics, the failure of parliament to reform or repeal laws that discriminate against women such as the child marriage law, and online harassment of women.

What is more worrying is when a woman’s dignity and well-being can be sacrificed for the sake of politics and propaganda.

The organizers of the action identified some examples of toxic politics in Malaysia. (“Rakyat” means people.) 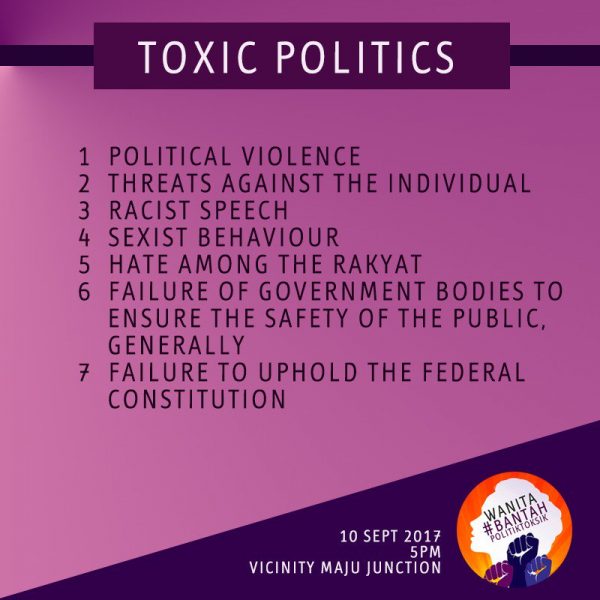 Examples of ‘toxic politics’ in Malaysia. Photo from the Facebook page of Wanita Bantah Politik Toksik

The gathering also united various personalities who have been critical of the ruling party which has been in power since the 1950s. The incumbent prime minister is accused [7] of pocketing more than 600 million US dollars through a state-owned investment firm. The corruption scandal has sparked widespread protests [8] across the country. The political crisis it engendered also led to the curtailment of free speech after the government ordered the closure [9] of several media outlets that have been reporting on the corruption issue.

“Wait A Minute Now,”, an independent news website, wrote [10] about the political importance of the purple march:

It was quite a sight to behold. 1,000 people does not sound like a lot, but in Malaysia, where protesting is not looked upon kindly, it represents at least that many women who are brave and passionate enough to come out and make themselves heard. Women of all ages, colour, background, and sexual orientation waved placards and chanted slogans in hopes that the movement would be recognised as a call for change.

But columnist Boo Su-Lyn urged [11] the organizers to acknowledge that the event is for the benefit of the political opposition:

There is nothing wrong with supporting the Opposition; civil society leaders should just make clear their objectives about a regime change, instead of pretending that they are independent and impartial activists fighting for the rights of all Malaysians.

Indeed, there were opposition leaders in the rally, but the majority of the participants were members of civil society organizations and ordinary women who support the advocacy.

The hashtag #WanitaBantahPolitikToksik [12] (Women Against Toxic Politics) was used to promote the action and to unite Malaysians in resisting toxic politics.

Below are some photos during the September 10 march and the messages of solidarity by Malaysian Twitter users:

Sexism is often used to silence women from voicing out their issues. #WanitaBantahPolitikToksik [13] pic.twitter.com/iFE1OyrCJz [14]

You would be a fool to underestimate young women ? pic.twitter.com/AntlOK6zXI [16]

We are here together for a purpose and with hopes for Malaysia to be free from toxic politics #WanitaBantahPolitikToksik [13] pic.twitter.com/MqHHYEZ0FH [18]

Demand for non discrimination on any basis – including sexuality – is on the ground at today's march! #WanitaBantahPolitikToksik [13] pic.twitter.com/LZQzqgtvvX [20]

if u wanna live in a better world/country, u needa first hv respect w ppl around u, especially women #WanitaBantahPolitikToksik [13]

We were at #WanitaBantahPolitikToksik [13] in KL today and it was glorious ??✨ pic.twitter.com/QuoHq4UkW2 [23]

As 50% of voters, women have the right to shape the national agenda. We reject toxic politics. #WanitaBantahPolitikToksik [13] pic.twitter.com/d3vfXcIliU [25]

At the #WanitaBantahPolitikToksik [13] rally in KL today (Women Against Toxic Politics) pic.twitter.com/2GDB4h9krp [33]