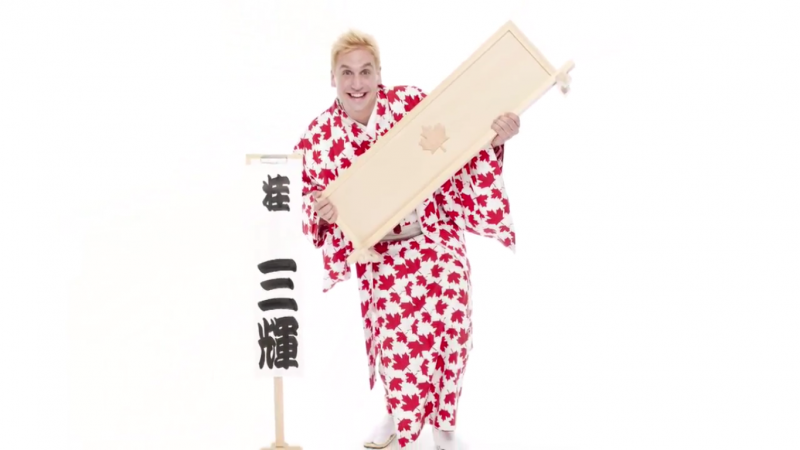 A Canadian comic and playwright is successfully taking on one of Japan's most popular traditional forms of entertainment with a goal of introducing it to the world.

Katsura “Sunshine” (桂 三輝, Katsura Sanshain) has mastered rakugo, Japan's “art of comic storytelling“. He's the only officially qualified non-Japanese rakugo professional in the world and gets the first part of his name from Katsura Bunshi VI, the “master” who taught him the ropes.

The second part of his stage name, 三輝, or “Sanshain”, is also a reference to his lineage, and is also intended to be a play on words to match his sunny disposition and cheerful blonde hair.

As a performance art, rakugo itself is deceptively simple. According to Katsura Sunshine:

A minimalistic performance art, Rakugo features a lone storyteller dressed in kimono, kneeling on a cushion, who, using only a fan and a hand towel for props, entertains the audience with a comic monologue followed by a traditional story.

While Katsurua Sunshine does perform in Japanese, he also has made an effort to translate the artform into English. Here is an example of rakugo, where Katsura Sunshine dissects the complexity of Japanese “polite language”, with perplexing results:

Originally from Toronto, Canada, Katsura (then named Gregory Robic) first arrived in Japan in 1999, intending to stay for only six months. Nine years later he was still in Japan, and decided to train as a rakugo storyteller. In recent years Katsura Sunshine has taken his show on the road, performing in front of international audiences.

Here's an example of his show:

In the same set, Katsura Sunshine tells the story of Jugemu (寿限無) a Japanese folktale and that is one of the most famous stories in rakugo, and a word that every Japanese student must memorize in elementary school:

At the moment Katsura Sunshine is based in Ise, a small city in rural Japan. He regularly performs around the world, and intends to at some point open an an off-Broadway show devoted to rakugo.

Katsura Sunshine's Rakugo performances can be found online on his YouTube channel, and on Timeline, a Japanese site focusing on news, technology and entertainment.