Ayotzinapa: It's Been Three Years Since 43 Students Disappeared in Mexico 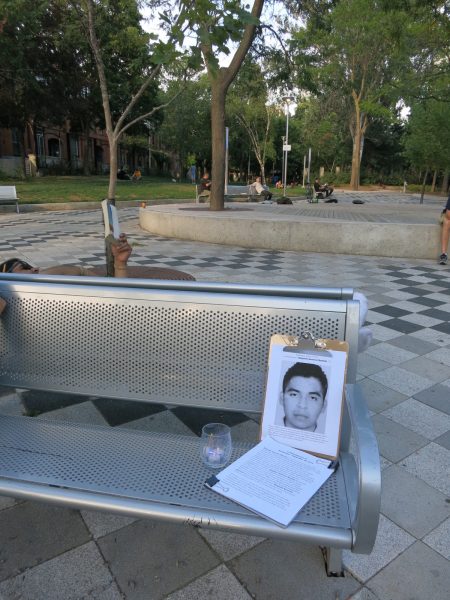 “In memory of Ayotzinapa” (Photograph of one of the missing students). Image shared on Flickr by user Lws & Clrk, used under CC BY-SA 2.0 license.

September 26 will mark three years since the violent events in Iguala, Mexico, a city in the southwestern state of Guerrero, led to the disappearance of 43 student teachers from the Escuela Normal Rural Raul Isidro Burgos in Ayotzinapa.

The Ayotzinapa case, as it's become commonly known, has gone cold. Due to the lack of advancements in the investigation, its relevance has waned in the public's eye. However, the fate of these students remains a mystery and cause for controversy.

What we know at this point

The most accepted story claims that the students, riding in buses that they had commandeered to attend a protest, were taken into custody by local police. They were then handed over to a local criminal organization identified as Guerreros Unidos, or “Warriors United.”

The criminal group acted on the orders of Iguala’s mayor and his spouse, known as the “Imperial Couple” for their extravagance and abuse of power. The infamous couple was linked to the Party of the Democratic Revolution, one of the opposition parties to the current government in Mexico.

The official version, partially confirmed by experts from University of Innsbruck, Austria, states that the students were then killed and their corpses burned in a landfill in the town of Cocula, also in Guerrero. But this story has been disputed by public opinion and some experts who consider it infeasible that a fire or mass pyre in that location could have been strong enough to incinerate the remains of every single student.

Other skeptics claim that the students were last taken to a military camp, a version not entirely refuted by others unsatisfied with the official story, as Mexico’s government has denied access to army facilities.

The only known truth is that these 43 students have not reappeared and their families continue the demand hard evidence and explanations.

Over 100 people have been detained since November 2014 for their alleged involvement in the case, including the main leaders of Guerreros Unidos and the “Imperial Couple.” However, no one has been declared criminally responsible for what happened — that is, not a single sentence has been handed down, 36 months after it happened.

More than 120 people were arrested during the investigation after the student teachers’ disappearance, but among them only 70 are accused before a judge of having participated in said events. Sidronio Casarrubias, who is the alleged leader of the criminal group “Guerreros Unidos” and bears official responsibility for the students’ disappearance, is among the detainees but has not been recorded in the case. The PGR (Attorney General's Office) reported that it does not yet have the evidence to do so.

Since the disappearance, three people have acted as head of the Mexican Attorney General's Office, which is responsible for investigating the facts and presenting those responsible to the judiciary: Jesus Murillo Karam, Areli Gomez and now Raul Cervantes. All of them have undeniable links with the Institutional Revolutionary Party (from whose ranks arose the country's current president, Enrique Peña) and all three have been strongly questioned about the way in which the Ayotzinapa case has been handled.

Three years after the tragedy, few remain who honor the students’ memory and demand that they be returned alive and that the government be held accountable. Those who memorialize the tragedy have formed solidarity with families of the disappeared by sharing videos like this one, circulated on Twitter by the non-governmental organization Fundar. In it, one of the mothers of the victims says, “So that's how I handle it, thinking, waiting, and that's why I say this is the worst thing that can happen to a mother”:

#VivaMexicoPero (“#LongLiveMexicoBut”) it's time to listen to the dignified, anguished voices of the victims, survivors and relatives of the #Ayotzinapa Case

Jan Nimmo is another person who recalls the case, despite the slowness of the investigation:

Almost 3 years and every day I still think of the students of Ayotzinapa #Mexico, their families and the 31,000 who are missing #Ayotzinapa3Años (#Ayotzinapa3Years)

Journalist and filmmaker Epigmenio Ibarra also pays tribute to the students by posting a daily “class roster” on Twitter, in which he shares the name and photo of every single person missing:

Betting on the passage of time

The Ayotzinapa case was one of the first difficulties faced by President Peña and his administration, but was soon followed by countless scandals of conflict of interest, negligence, abuse of power and political corruption involving him and his cohorts. Despite this, the political class is ready for the presidential succession of 2018 as if none of it ever happened.

On the other side, the person currently in charge of investigating the disappearances, Raul Cervantes, is instead focusing his energies toward gaining the still vacant General Prosecutor of the Republic seat, a position that would guarantee him nine years in power (the president will not be able remove him) and turn him into a virtually untouchable individual by granting him immunity to citizen charges. The aforementioned General Prosecutor of the Republic office will be an autonomous entity that will substitute the present Attorney General's office.

3 YEARS OF AYOTZINAPA AND THERE IS STILL NO JUSTICE, SO THEY WANT TO PUT RAUL CERVANTES AS ATTORNEY GENERAL OF THE REPUBLIC. NEVER

Global Voices will continue to follow the case as we have over the last three years, including personal stories about the Ayotzinapa students like Aldo Gutierrez's, who was not counted among the 43 but was seriously injured after being attacked by Iguala police and remains unconscious in a hospital in Mexico City.