Is Ex-Soviet Georgia Backsliding on Justice? 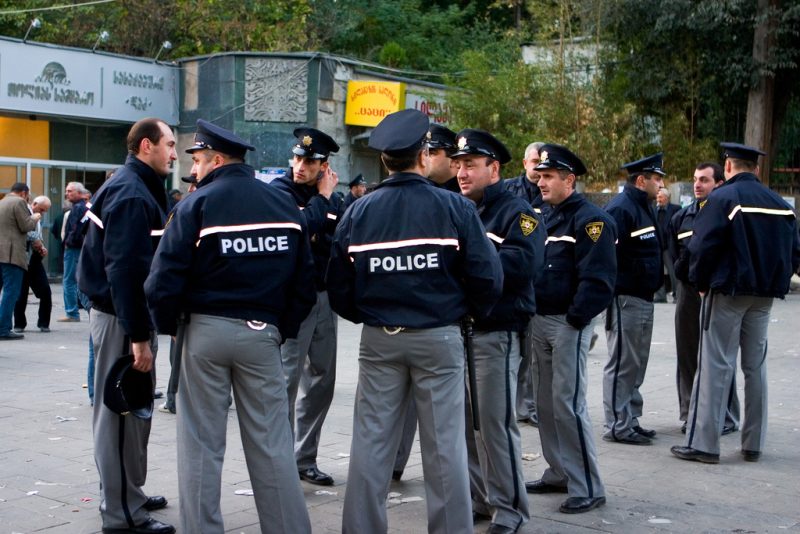 The following article was written for Bertelsmann Stiftung's Transformation Index (BTI) and published on Global Voices with permission. The views expressed in this article do not necessarily reflect those of Global Voices.

On June 10, 2017, thousands of Georgians protested on the streets of Tbilisi, the country's capital, in support of two members of the rap group Birja Mafia. The young men were arrested on drugs charges they allege to have been trumped up. The protests marked a further step in the decline of Georgians’ trust in their law enforcement system.

Former president Mikheil Saakashvili’s successful police reforms in the first decade of the 21st century served as a model for reform in transition countries, but the gains may have been short-lived. By April 2017, only 38% of Georgians rated police performance good or very good, down from 60% as recently as November 2013. Meanwhile, only 13% rated the performance of both the courts and the office of the Chief Prosecutor good or very good; 27% said the courts performed badly or very badly, and 19% said the same of the Office of the Chief Prosecutor. Is the rule of law in Georgia on a downward trend?

Georgia scored 6.5 on the “Rule of Law” criterion in the Bertelsmann Transformation Index (BTI) 2016, a respectable showing that placed it in the “Sound” category alongside 22 other transitional and developing countries. Georgia was ranked lower than the nine countries ranked as “Excellent”, but higher than the remaining 97 countries designated “Fair”, “Flawed”, or “Poor”. However, the report notes problems in the country both with the prosecution of abuse of office and the independence of the judiciary, two issues that are contributing to the current deterioration in public confidence.

The Birja Mafia affair is not the only high-profile case to hit the headlines. In May, Azerbaijani journalist Afgan Mukhtarli was abducted in Tbilisi and transferred to prison in Azerbaijan, and accusations of complicity among the Georgian police led to the suspension of the head of the Border Police and the chief of Counterintelligence in July. Mukhtarli’s lawyers and wife say that the journalist’s abductors wore the uniform of the Georgian police. In June, one of Tbilisi’s police chiefs was suspended after Georgian media released a video showing apparent police abuse, in a March incident in which a man called Shota Pakeliani ended up in a coma after injuries received while in police custody. In both cases, the authorities took action after the public outcry, but critics say that this happens too rarely, and that even when it does the consequences are insufficiently severe.

In 2015, the Prosecutor’s Office announced plans for the creation of a Department for Investigation into Crimes Committed throughout the Judicial Process. But as the Prosecutor’s Office is frequently accused of having political motivations, this department might not represent a real solution to the problem. In 2016, investigations were opened into 173 cases of alleged police mistreatment; but none of these for police brutality or torture, only for the less serious crime of “exceeding official powers.” Only five investigations led to criminal proceedings, and only two resulted in guilty verdicts. In its 2016/2017 annual report, Amnesty International raised concerns about the Georgian government’s failure to move on legislation to create an independent mechanism for investigating human rights violations by law enforcement bodies.

Georgia received visa-free travel to the European Union in March 2017, and its Association Agreement with the EU entered into force in July 2016. Georgians overwhelmingly support eventual EU membership. In a poll taken in February and March this year, 90% of respondents favored EU membership. So, although accession is not on the EU’s radar just yet, the Georgian government should be strongly motivated to comply with the Association Agenda, which includes reforming the prosecution service. Efforts to do that are in progress. The Prosecutor’s Office was separated from the Ministry of Justice in 2012, and in early 2016 a Prosecutorial Council and a Consultation Board were established to increase the office’s independence. In a January 2017 report, the Council’s anti-corruption body, the Group of States against Corruption (GRECO), praised Georgia’s progress in reducing corruption, and welcomed the country’s efforts to reform its prosecution service. But GRECO noted that further work was needed to fully implement reforms and reduce the influence of the executive and the legislature on high-level prosecutorial appointments and on the activity of the Prosecutorial Council.

The same kind of political linkages contribute to the problems within the police force. The appointment of top police officers is dependent on the will of the interior minister, which undermines the independence of the force. In the courts, too, the legacy of politicization left over from the Saakashvili administration persists, although the new government has taken some steps to improve the situation. The Public Defender’s Office is one bright spot. Responsible for overseeing human rights and freedoms in Georgia, it enjoys broad public support, although its recommendations are not implemented often enough.

De-politicization of justice needs to be a priority of the ruling Georgian Dream party, for the sake of the public at large, the country’s EU hopes, and perhaps even the party’s own political fortunes. The former governing party, Saakashvili’s United National Movement, found, to its detriment, that failing to provide adequate support for the rule of law can have political consequences. Widely publicized cases of prison abuse and police violence contributed to the party’s loss of public trust and eventual ouster in 2012. If the current government cannot improve public confidence in the system, it might find that history can repeat itself.

Justine Doody is an editor and analyst. She writes for the Bertelsmann Stiftung’s BTI Blog and SGI News.