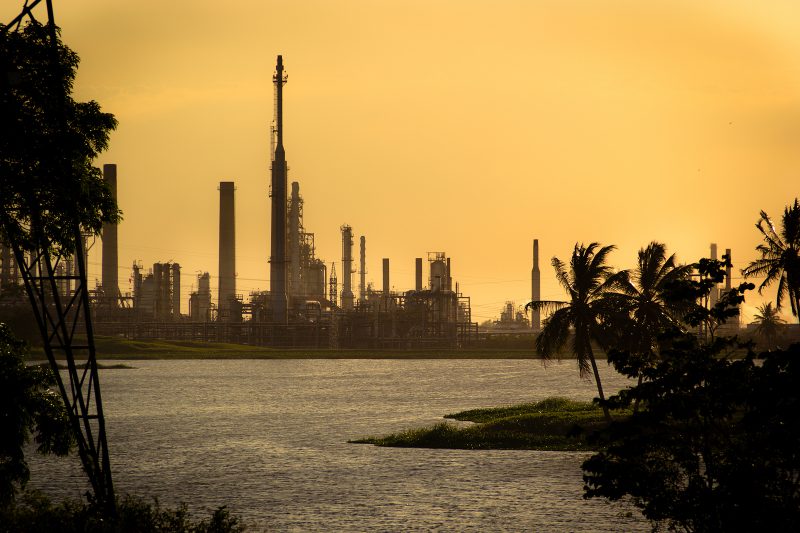 At a recent gathering of her political party, the United National Congress (UNC), Trinidad and Tobago's leader of the opposition, Kamla Persad-Bissessar, made a stunning allegation: that A&V Oil and Gas Limited, which supplies crude oil to the state energy company Petrotrin, had defrauded it of almost TT $100 million (close to US $15 million) by inflating the figures for its product.

Referencing an internal Petrotrin audit report, Persad-Bissessar also accused the suppliers of being financiers of the ruling party, the People’s National Movement (PNM).

Given that the twin island Caribbean nation ranked 101 out of 176 in Transparency International's 2016 Corruption Perceptions Index, there was immediate discussion about the issue on social media.

In a post at satire and news site Wired868, attorney Martin Daly called out the entire state enterprise system as faulty:

The State enterprise system is the vehicle by which the unholy facilitations are carried out. It all goes on behind the corporate veil of the State enterprise corporations, which are usually private limited liability companies, incorporated under the Companies Act, and in which the Government is the sole or majority shareholder.

Explaining that this separate legal status paves the way for line ministers to pass the buck, Daly continued:

The end result of this State enterprise system is that vast sums of our money are spent or directed to be spent by persons who are essentially operatives acting at the behest of the political executive and by contact in a manner neither envisaged nor protected by the Constitution.

The conduct of business through a system such as this has not only resulted in imprudent use and downright squandering of our country’s money without checks and balances. It has been destructive of honesty, accountability and transparency. It has irrevocably warped our sense of value for money and created a mocking pretender celebrity class.

Prime Minister Dr. Keith Rowley seemed at ease with having an opposition that could help provide the necessary checks and balances for good governance — however, he responded to Persad-Bissessar's comments bay saying that while the country would be better off for having an “effective” opposition leader, “jamettry is not really the way to deal with these things”.

A “jamette” is a local term referring to a woman of questionable morals.

The women's arm of the UNC reacted swiftly, calling the word demeaning and sexist; they demanded an apology from the prime minister. Social media users couldn't resist weighing in, with many suggesting that between the memes and the feminist outcry, the public focus was in the wrong place.

Twitter user Rhoda Bharath, who comments regularly on political issues, posted a tongue-in-cheek statement from a fictitious jamette association, but called out the double standard in a follow-up tweet:

It is ok to call an Opposition Leader a rapist with no evidence. But problematic to accuse an Opposition of jammetry?#Semantricks

Back in 2015, during the then People's Partnership (led by Persad-Bissessar) government's no-confidence motion against Dr. Rowley (who was opposition leader at the time), parliamentarian Vernella Alleyne-Toppin made the distasteful accusation that Rowley was the product of rape — and that this inauspicious beginning has made him “aggressive”, “arrogant” and “unfit for public office”.

Kamla Persad-Bissessar is essentially accusing a PM, a Petrotrin employee and a private businessman of colluding to defraud the State.
That is a huge accusation and I hope she can back it up. […]

The correspondence also accuses Persad-Bissessar of distorting the Petrotrin interim audit report with “malicious intent and to score political points”, and demands financial compensation for the damage caused.

However, Persasd-Bissessar's attorneys have since revealed that she will not apologise because she spoke the truth, saying that the company's claims are “ill-founded, baseless in law and doomed to fail”. As of this writing, the UNC's homepage still carried an article calling on Rowley to “stop the ‘ole talk’ and take action on Petrotrin audit findings”.

Wired868 was unimpressed to learn of the action that the prime minister did take — calling the owner of A&V Oil and Gas personally:

The Prime Minister had good news to report from their conversation.

As far as solid investigative work goes, Detective Rowley can clearly give acting Commissioner of Police Stephen Williams a run for his money.

Remarkably—blind to the growing disaffection with his government’s performance and his leadership—Keithos was still enjoying his own cool-aid on Thursday night, when he discussed the matter further.

‘No person in Trinidad and Tobago, whether you are PNM or not, you will find no protection or solace at the PNM’s doorsteps,’ said the Prime Minister. ‘We are protecting no one with corrupt action whether you are friend or foe.’

In the next breath, Rowley said he saw no reason to suspend PNM Senator Allyson Baksh—the daughter of the A&V owner—as a result of the furore since she had no connection to the investigation.

Baksh, according to information unearthed last week by the Trinidad Express, is an A&V director and secretary and holds the same number of shares as her father.

Attacks on the media

In a curious development, a photographer for a daily newspaper, who was dispatched to cover the story and take photos of the A&V Oil and Gas headquarters, was allegedly attacked and prevented from doing his job. The Trinidad and Tobago Police Service ordered an investigation into the allegation, since a senior officer was said to have taken part in the assault.

Wired868's Mr. Live Wire was all too happy to add his two cents’ worth:

De Silva, according to the Express, is the third media worker to be assaulted outside the A&V compound this week, which should surely be enough for the company to be declared a ‘hot spot’ and its management […] detained under the anti-gang legislation.

The post also questioned whether any probe into this matter would be trustworthy, given “the close relationship shared by the Prime Minister and the persons close to the centre of the investigation”:

Rowley did not suggest any concerns about the competence of PNM chairman and Minister of Energy and Energy Industries Franklin Khan although, just four months ago, Khan singled out A&V for praise in Parliament. […]

Can the public feel confident that the Ministry of Energy will treat the Petrotrin Audit report as seriously as it deserves with Khan as line minister?

For its part, A&V Oil and Gas issued an apology to the media and invited them to tour its facilities. The Media Association of Trinidad and Tobago advised its members not to attend, as it was clear from the company's track record that their safety could not be guaranteed.