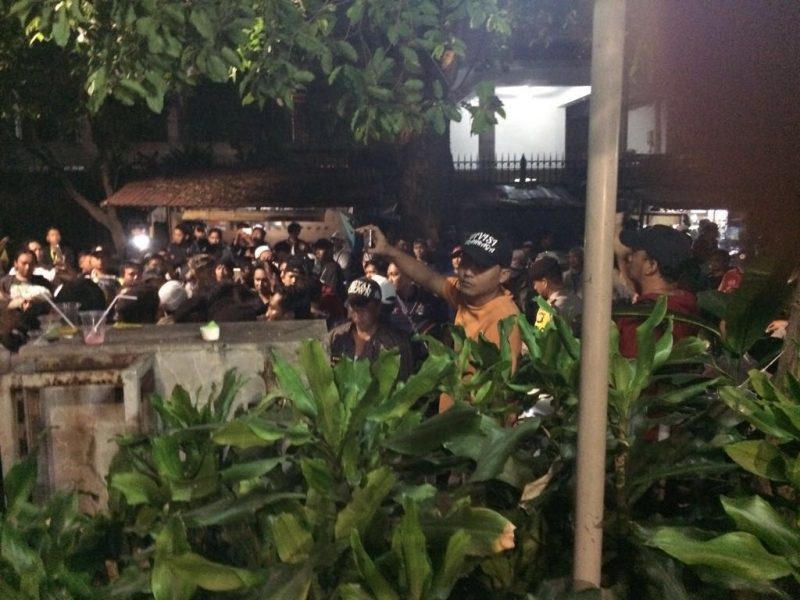 Hundreds of anti-communist protesters in Indonesia surrounded the office of a human rights group which was discussing the events in 1965 and 1966 that led to the killing of at least half a million suspected communists in the country.

The mob, which accused Indonesian Legal Aid Foundation (LBH) of supporting the defunct Indonesian Communist Party (PKI), disrupted the activity and clashed with the police who tried to disperse the crowd.

The day before, on September 16, 2017, the police themselves had prevented LBH from holding a seminar under the theme “Revealing Historical Truth about the 1965-66 Events” by blockading the entrance of the venue in Jakarta, the country’s capital. Authorities claimed the organizers had failed to secure a permit.

Some of the speakers of the seminar were prevented by the police from entering the LBH office as shown in the photos below:

#DaruratDemokrasi
The police didn't allow ths old people to tell the truth abt what happened in 1965/66 in Indonesia@hrw @HumanRightsCtte pic.twitter.com/pKTrBJYytB

In response, LBH organized the cultural event inside their own office building, titled “Asik Asik Aksi: Darurat Demokrasi” (Fun and Action: Democratic Emergency), which became the target of the anti-communist protesters.

An anti-communist hysteria swept the country in 1965, which led to the rise of General Suharto. During his three-decade rule, Suharto banned the Indonesian Communist Party and the publication of Marxist and other communist books. Even the use of communist symbols like the hammer and sickle is outlawed up to this day.

Suharto also prevented scholars and the public from probing the role of the military and other state forces in the massacre. In recent years, human rights groups have petitioned the government to review the 1965 massacre and give justice to thousands of victims who were imprisoned and killed because of mere suspicion that they were communists. Some of the victims are still living and have already given testimonies about the suffering they endured.

In 2015, the government of President Joko “Jokowi” Widodo welcomed the proposal to launch a reconciliation commission about the massacre.

‘Democracy is in a state of emergency’

But the protest on September 17 is a reminder not just of the lingering anti-communist sentiment in the country, but also the continuing influence of pro-Suharto elements in the ranks of the police and military.

In response to the incident, activists used the hashtag #DaruratDemokrasi (democracy in a state of emergency) to protest the blocking of the seminar by the police and the failure of authorities to stop the anti-communist mob from harassing members of the LBH.

Call of solidarity. Why does discussion on history have to be stopped? Is it because the state is truly guilty?

The Alliance of Independent Journalists (AJI – Aliansi Jurnalis Independen) reported that even journalists were not allowed by the police to cover the seminar.

The Southeast Asian Press Alliance pointed out that the “arbitrary action” of the police to set up a blockade led to the “forceful disbandment” of the seminar. It warned that this “raised concern on the situation of freedom of expression and freedom of assembly and association in the largest democracy in Southeast Asia.”

We condemn the police for failing to protect our hardwon freedom of speech, with lame excuses that the situation posed a dilemma for them. If the talks had continued, they said, the protesters would have become more restless

The weekend until the wee hours of Monday, which saw the evacuation of the seminar participants, will go down in history as President Joko “Jokowi” Widodo’s failure to firmly protect our freedom of speech. This constitutional right is vital in addressing unresolved human rights violations, among his reiterated pledges.

The East Timor and Indonesia Action Network urged the government to “end the thuggish threats against Indonesian civil society.” The group added:

The hardline groups of today are alarmingly similar to the paramilitaries of the New Order regime [Suharto era]. Indonesia must learn from the past and ensure that this time these groups do not enjoy any impunity.

‘The attack on YLBHI office will create a climate of fear’

The Asian Forum for Human Rights and Development (FORUM-ASIA) blamed the police for allowing the mob to surround the LBH building:

The complete inaction of the police to stop this violence, contributes to the erosion of democracy and violations of the rights to freedoms of expression and assembly in Indonesia.

Meanwhile, anti-communist groups countered by using the hashtag #DaruratPKI (Emergency PKI) to warn the public about the rise of so-called PKI elements in society. Groups with military links also spoke of an emerging PKI threat.

However, those accused of being communists are often simply citizens who are interested to know more about the history of the country, especially the period before Suharto became president.

The role of the police in preventing the seminar and the daring action of the anti-communist group could mean that the time when Indonesians finally learn the truth about the 1965 massacre could still be a long way off.

The attack on YLBHI office will create a climate of fear for 1965 survivors to reveal the truth about the tragedy. pic.twitter.com/c69tSuAN6c