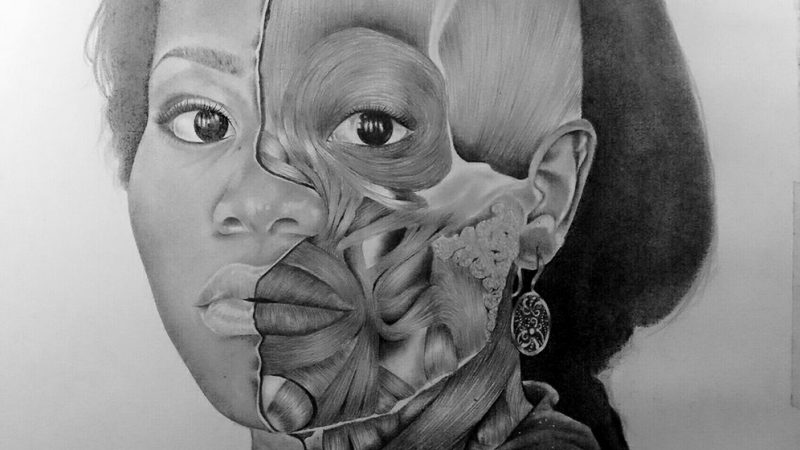 “[This] is a self-portrait with a half-finished face, and the other half is sliced, showing the muscles, tendons and mucous membranes. It’s an anatomical analysis, which means that what is essential is not visible to the eye. Europeans, Africans and Asians are all equal under that which is so politicized – skin color. Above all, we are people, members of the same race, the human race.” Original drawing by Carmen Bolena, published by Afroféminas and used with permission.

The following piece by journalist Lucía Mbomío was originally published on Afroféminas and is republished by Global Voices with permission.

Carmen Mbasogo Edjang Ezuku is from Equatorial Guinea. She is only 22 years old and is captivatingly talented in many ways. She is a fine arts student, actress, singer and dancer.

Yes, that’s a lot, but today we will “only” talk about her drawings. In her work, I see women who spoke to me, who looked me in the eyes, who burst out laughing and who touched me with their joy and strength. I have also seen a statement, a path, an identity.

With Carmen Bolena, which is her stage name, the experience is a bit similar.

Lucía Mbomío (LM): Is talent enough or does it need to be polished at school?

Carmen Bolena (CB): I don’t think being born with talent is enough to be really good at any discipline. Nor do I believe that schools have “the manual” to bring out talent from within. What I do know works is the effort, the hours you dedicate to it, and the interest you have to be outstanding in your craft.

LM: I have seen some of your drawings that look like photographs, so real, so detailed … and others in which you break with that faithful representation to convey ideas. For example, I'm thinking of one in which half the face is normal and the other is the flesh that all human beings have under their skin. Should art be more than beauty? Should it also be an ideology, transformative?

CB: Gosh, this question shakes me to my core, hahaha. Let’s see, people love to ask those of us who have studied art (I have reservations about saying “artists”) what art is. Art itself is an abstract concept rather difficult to define because it is ever-changing. Its definition mutates and is linked to its given era. So, to the question “should art be more than beauty, ideological, transformative?” I will respond from a position of absolute subjectivity: It may be, but not necessarily. I am of those who think that art can make you feel without forcing you to think, but never leaves you indifferent. To me, art is a feeling and metamorphic beauty, because just as I see beauty in [Vermeer's] “Girl with a Pearl Earring” or in [Van Gogh's] “Starry Night over the Rhône,” I see beauty in Goya’s “Saturn Devouring His Son” and in the works of Mark Ryden, Michael Hussar or Edward Gorey. But, specifically, the drawing you mention does make an ideological statement: It is a self-portrait with a half-finished face, and the other half is sliced, showing the muscles, tendons and mucous membranes. It’s an anatomical analysis, which means that what is essential is not visible to the eye. Europeans, Africans and Asians are all equal under that which is so politicized – skin color. Above all, we are people, members of the same race, the human race.

LM: And in what ways would you like to transform from this society?

CB: In a lot of ways, too many for a century, which is how long a human life can last. But, mainly, there are two that completely concern me: racism and machismo. I think my work reflects the uneasiness and disagreement I have towards these two ideologies that have done and continue to do so much damage in today’s society.

LM: Your work depicts many black women. Why is that?

CB: Essentially, because it is a project that talks about the identity, acceptance, recognition and empowerment of an invisible collective: black people, marginalized and invisible. They are the protagonists and that’s why they’re represented. Also, because I am black. And it was time to denounce and talk about our situation in some way.

LM: How do you think being adopted affects your search for identity?

CB: I was adopted when I was six and I have always known that I had two families who cared about me. And although my Asturian family never wanted to distance me from my biological one, this was something that happened on its own. Growing up in an essentially white environment, I was also raised with European values, which almost consecutively led me to reject everything related to my blackness. I wanted to deny my identity for a long time, but it exuded through my pores, forcing me into submission through my gestures, my physique, when it came to dancing … in so many things that I could not deny.

Also, I didn’t have any close role models to admire or imitate. Whenever a black person appeared in a public environment, they were prostitutes, immigrants, servants, murderers or, on the other hand, they were always the first to die in movies. I was always the only black person in everything, including entrance exams, which made me very uneasy because I thought I would always be alone. Where were the Africans who were like me in Spain?

Going to study in Madrid and meeting groups like Kwanzza [the afro-descendant student community of the Complutense University of Madrid] and E.F.A.E [A collective devoted to ‘empowering afro-descendant females’ in Spain] was definitely a turning point. I saw that there were many more people like me, I was not alone and that there were many of us! Hahaha. It was fantastic to see that among us there were university students of politics, journalism, philology, art, science …. they spanned, we spanned every field. I began to read and to research, to go to conferences and interact socially and for the first time since I left Africa, I felt like I was part of something I identified with. Except for my status as adopted which, while true, you can count us on one hand.

All of this discovery was restorative for my troubled conscience. It no longer hurts to recognize that I am black. I am and I say it bursting with pride.