Steven Seagal Rediscovers Celebrity in Central Asia, and the Implications Are Alarming 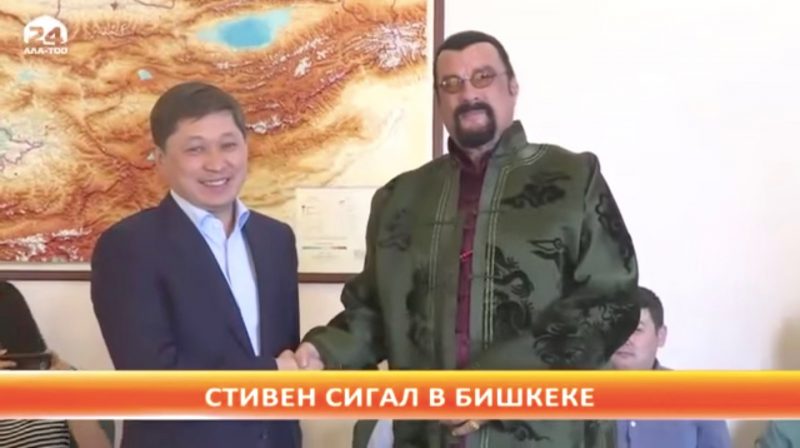 “When the seagulls follow the trawler,” the well-known French footballer Eric Cantona once told a group of bemused British journalists, “it is because they think sardines will be thrown into the sea.”

In a barely related but equally mind-muddling incident, B-list Hollywood actor Steven Seagal is trawling through ex-Soviet Central Asia, and he is not doing it purely out of goodwill.

This is a man with a worrying plan.

Seagal's ongoing tour of the region that began earlier this month has allowed him time and space to feel famous again.

In case you missed him, Seagal, 65, stopped making movies that people had heard of in the same decade Eric Cantona stopped playing football: the 1990s.

Plummeting box office sales haven't persuaded Seagal or the directors he works with to change the format of his films much, however, if this critic's review of a 2016 release he starred in is anything to go by:

If you're reading this review of the Steven Seagal vehicle “The Asian Connection,” it is probably too late to dissuade you from seeing almost any other movie. I get it: you want to see a movie with a vaguely racist-sounding title starring the has-been star of cheesy action films like “Hard to Kill,” “Marked for Death,” and “Above the Law.” These films are bad, but in an endearingly disastrous way. The same is basically true of “The Asian Connection,” a lousy bank heist flick and one of Seagal's most engagingly tacky recent efforts. I want to defend this movie, but it's so bad that I must warn you: if you watch this film knowing that it is Steven-Seagal-wearing-a-du-rag-and-glowering-impassively-at-attractive-young-women bad, you will get what you pay for. That's both an endorsement and a warning.

Seagal's Central Asian and Russian connections go back at least a decade, as this well-written account of his various trips to former Soviet countries details.

Since late 2016 he has been the holder of a Russian passport, and on September 15, Kyrgyzstan's Prime Minister Sapar Isakov disappointed many of his countrymen by extending the same offer:

I consider it an offense to the Kyrgyz Republic to offer Kyrgyz citizenship to some visiting star. Our legislation contains an exhaustive list of grounds for obtaining Kyrgyz citizenship. The friendship of a foreigner with a prime minister is not one of these grounds. Last night the reaction to Isakov's gesture was universal. It was one not so much of outrage, but rather downright disgust.

This is just getting waaaay out of hand. https://t.co/Bp9efSTTUF 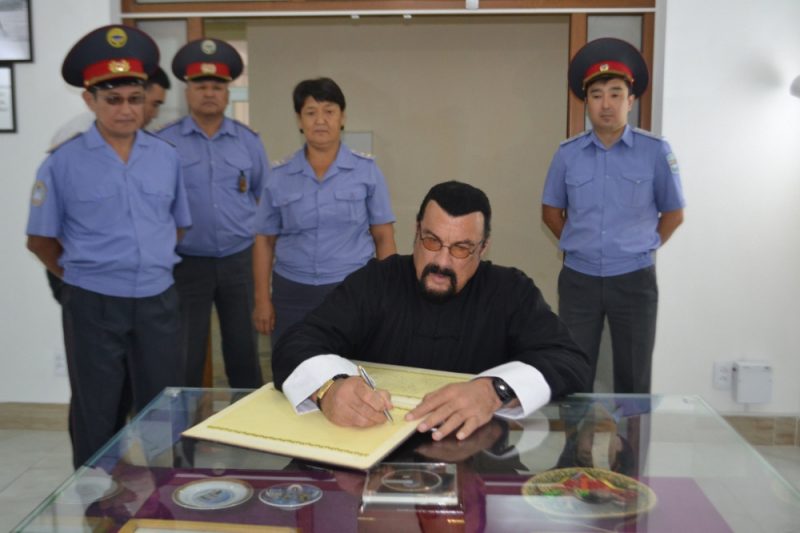 And it gets worse…

So far, Seagal's trek through the region has also taken in autocratic Kazakhstan and Uzbekistan.

In the latter he reportedly arrived as a replacement for Jean-Claude Van Damme, who had intended to appear at a martial arts tournament there but fell ill at the last moment.

But why should anyone care about his visit? Shouldn't Steven Seagal be free to build bridges and facilitate cultural exchange through violent sports while glad-handing leaders in countries ranging from semi-authoritarian to worse?

Not really. The problem is that Steven Seagal's latest journey through Eurasia is actually all about promoting Steven Seagal's years-old and very public bid to star as Genghis Khan in an epic made by any producer with deep pockets.