In Ukraine, Fears of ‘Technological Terrorism’ Cause Free Expression to Decline 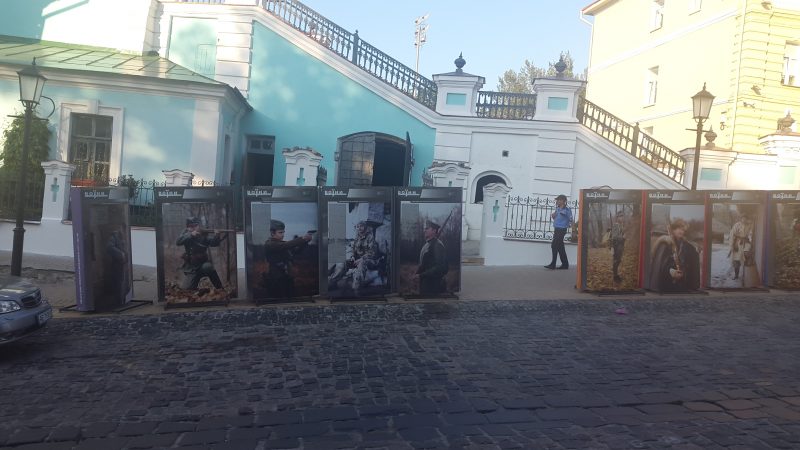 Open air exhibition of posters of different kinds of soldiers from Ukrainian history next to landmark St. Andrew Church in Kiev. Photo by Filip Stojanovski, CC BY.

Olga Kyryliuk, PhD, is an expert in International Law, and co-founder of the Ukrainian NGO Digital Defenders Partners – DDP (Партнери цифрового правозахисту in Ukrainian), focused on protecting human rights online and promoting the idea of free, open and affordable to all Internet.

DDP is a member of the Internet Freedom Platform of Eastern and Central Europe and Eurasia, established by civil society organizations that work on fostering of the freedom of expression, association and flow of information on internet.

In this interview, Kyryliuk spoke to Global Voices about the results of the recent research, and the current situation with digital rights in Ukraine.

Filip Stojanovski (FS): DDP recently published an analytical report on freedom of expression in Ukraine. What is your general assessment?

Olga Kyryliuk (OK): Freedom of expression is gradually deteriorating in Ukraine as the conflict in the East of the country gets protracted. The threats faced by Ukraine are of hybrid nature, and, therefore, require some non-linear reaction and deterrence tactics. Somehow succeeding over time in maintaining its military positions, Ukraine appeared to be absolutely unprepared to handle the information confrontation. Instead of ensuring equal protection to all the values recognized in any democratic society, Ukraine put itself before a dilemma of protecting either national security, or freedom of expression. And I strongly believe that this is the choice that should have never emerged. We should never sacrifice one basic value for the sake of the other, but rather try to balance them as much as possible.

FS: Unlike other European countries, Ukraine is in a particular situation: since 2014 parts of its territory are not under control of the government, but no state of war had been declared. How does this affect the level of freedom of expression in the country?

OK: This is another aspect where, in my opinion, Ukraine has to deal with extremely challenging reality of armed conflict without even using proper names to define this reality. And it really makes difference in terms of the limits of state’s discretion when safeguarding human rights in the peacetime and during the period of martial law. And if the martial law provides for respective restrictions, the latter are not justified when the country officially keeps living under the general rules applicable during the times of peace and stability.

FS: According to 2017 World Press Freedom Index, compiled by Reporters without Borders, Ukraine’s current rank is 102, on a scale of 1 (Norway) to 180 (North Korea). During the last two years it had been improving, from 129 in 2015 and 107 in 2016, but is still among the lowest in Europe. What are the difficulties on the efforts to measure the level of media freedoms?

OK: This particular Index is based, inter alia, around the criteria of pluralism, media independence and respect for the safety and freedom of journalists. In case of Ukraine, war with Russia and oligarchic control over the media and information still remain the biggest challenges. Such low position is also explained by the government’s failure to provide adequate guarantees to journalists and the lack of access by critical international observers and journalists to non-government controlled territories. 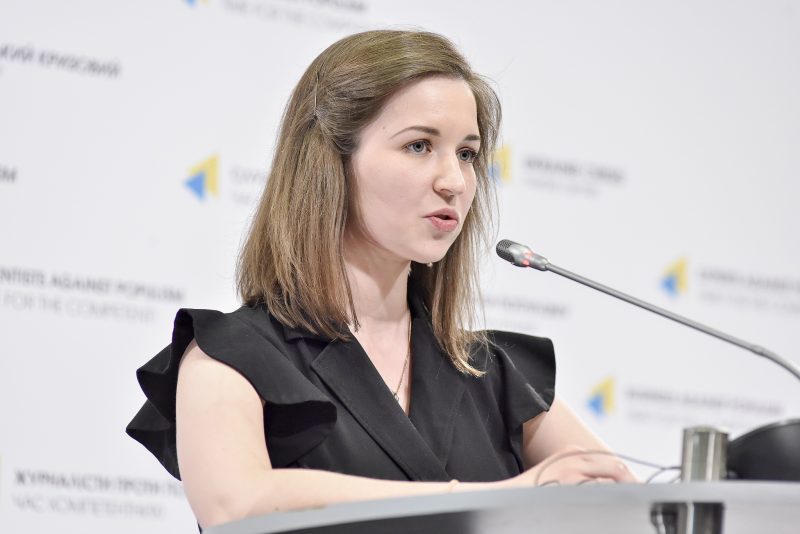 Olga Kyryliuk at the presentation of the analytical report on freedom of expression in Ukraine. Photo by DDP, used with permission.

FS: The ongoing conflict between Russia and Ukraine reportedly includes ‘information warfare’, such as use of propaganda and counterpropaganda. How are journalists, as well as regular citizens, affected by this situation?

OK: We are all struggling on a daily basis trying to surf through excessive amounts of information. Internet facilitated the dissemination of such information and made it easy accessible but, at the same time, blurred the reliability threshold. This gets even more complicated when huge amounts of fake and propagandist information are being generated on purpose. That’s where the digital literacy of regular citizens is of huge importance, as only by using the analytical skills it is possible to differentiate between facts and propaganda.

Another option is to use reliable and respected sources of information. But the thing is that people tend to believe and be more sympathetic towards the information, which already coincides with their own views. As for the journalists, I would say that conflict settings place additional responsibility on them, requiring to double check their sources, as well as deliver information timely and in objective way. At the same time, it is critically important to reach not only Ukrainian citizens but also international audience, which means producing qualitative information in foreign languages. In this regard, among the most successful projects promoting Ukraine abroad can be named Ukraine Crisis Media Center, StopFake, Free Voice Information Analysis Center, and Promote Ukraine.

FS: Recently Ukraine has also been discussed in terms of quite controversial steps of blocking access to Internet resources, foreign journalists’ expulsion and legislative initiatives restricting Internet freedom. What is the justification used, and your positions in this regard?

OK: It is noteworthy that all the restrictions are motivated by the national security interests, which for some reason are persistently opposed to freedom of expression. One of the most discussed initiatives was the extension of sanctions to a quite big number of individuals and legal entities. But in fact, that had huge collateral effect and meant blocking access to Russian social networks, search engine, email service, antivirus programs, etc. Currently, the parliament has a registered bill, which, if adopted, would make possible extrajudicial blocking of Internet resources and significantly broaden the definition of technological terrorism to include therein any dissenting opinion, criticism of the government or simply sensitization of the critical issue within the society.

FS: Freedom of expression is a much broader area than just freedom of the press, and censorship or self-censorship can affect all segments of society. How individual citizens of Ukraine react to the identified lack of this basic human right?

OK: The introduced restrictions and bans clearly divided society into two opposing groups, with some believing that national security should be the ultimate value in conflict settings, and the others pointing to them as a slippery slope that may end up in total control over the public opinion. Some Ukrainians became more careful in their online communications and tended to self-censorship, while the others started to use VPNs to circumvent the bans or moved to alternative communication and information platforms.

One of the biggest deficiencies of all the restrictions that are being introduced is the fact that they are poorly, if at all, communicated in advance. No public consultation and preliminary expertise is being conducted. Thus, instead of uniting the society in this critical historical moment the authorities are accentuating the disparities between different groups.

FS: What needs to be done and by whom in order for the situation with internet freedoms to improve in Ukraine?

OK: The best case scenario would be the end of the conflict itself, which would eliminate the government’s justification as to the urgent need of protecting national interests by all means. But so far as we have to deal with the current reality, what is really missing is the communication between different stakeholders. The restrictions are imposed without government ever explaining the actual motives behind them.

Moreover, the restrictions themselves fail to comply with the proportionality and adequacy test. Internet is not divided by borders, thus can’t be subject to legislative segmentation. By trying to win the battle, it is important not to follow the erroneous and restrictive tactics of your rival. We all know that states are much faster to impose the restrictions, than to abolish them. That’s why it is so important to keep all the laws and practices within the framework of international law.