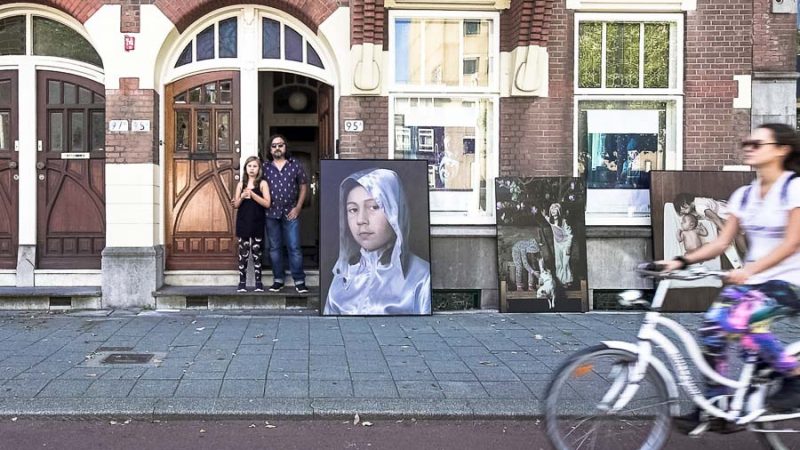 This is an abrdiged version of an interview with Paraguayan artist Enrique Collar originally published by Kurtural under its series “Artifices”. Interview by Sofía Hepner, Silvia Sánchez Di Martino and Juanma López Moreira.

In 1964, in the Paraguayan province of Iguazú, Enrique Collar was only four or five years old when Crescencia, his mother, was working in Buenos Aires, Argentina, just like almost one million other Paraguayans had done back then. During one of Crescencia's visits to the family back in Paraguay, she intended to go out with friends, and Enrique protested hiding her shoes to prevent his mother from ever going away again.

By 1971 Crescencia moved her child with her to Buenos Aires, where he attended college, majoring in graphic design and fine arts at Manuel Belgrano College while holding a job as a painter. He started publishing his art in 1990 in Asuncion, Paraguay while commuting between Buenos Aires and Asuncion until 1999, when he finally moved to Asuncion. He lived there until 2003, when he moved to Rotterdam, The Netherlands, where he currently lives with his wife Mireille, his daughters Roos and Lila, and their adopted puppy Sisi.

The making of this interview took about a week. Meanwhile, we shared stories and trips with the artist. We traveled via train from Rotterdam, his current place of residence, to Utrecht, the place that hosts famous paintings by the baroque Dutch painter Frans Hals to Delft, and the birthplace of Jan Vermeer. During that time, we were joking with Enrique about his life stages: an older Enrique that does not exist yet, the middle-aged Enrique, providing us with this interview; and Enrique the young, the main character of his past story, the painter hopping back and forth between Buenos Aires and Asuncion.

Kurtural: A young Enrique started painting back in Paraguay and Argentina carrying an easel in the time between attending fine arts college and your job at the painting workshop at San Telmo, the social gathering place for commoners at Paraguay. How did that happen?

Enrique Cuellar: It was the perfect environment to recover my identity in just every way. Argentina had lost the Malvinas, something that made them remember that Argentina was in fact part of Latin America. Charly Garcia started hanging out with Mercedes Sosa, folk and rock and roll were merging too, and the postmodernism was gaining popularity. I honestly had no idea what was going on in the art circles in Paraguay, but I would hang out with ordinary people. That gave me a bridge with my old childhood memories – paint the Lapachito (the National tree of Paraguay), paint the wagon they'd ask me. At the beginning, I was not in tune with any of that, but somehow, it turned into my motivation to find myself again, to get back my first six years in the countryside. There was a connection with these people because most of them were, just like me, from the province. It was a conscious decision to start capturing Paraguay in my paintings, but even deeper than that, I started fantasizing with a world where I could find familiar elements such as my grandmother and other town’s iconic people.

My first production in 1989 was done this way. I had a day job as a graphic designer for publishing houses while painting in my spare time. It was during a vacation in Paraguay with my mother that I took 10 or 15 of my pieces. Once in Asuncion, I visited several galleries, I met Belmarco then [a reknown gallerist], who showed some interest on my work. My first exposition was a total success with the critics and the media. When I returned to Buenos Aires I had extra money in my pocket, but one less painting. I remember thinking: “What have I done?, I’ve sold my soul to the devil!” This feeling came from the teachings of my professors at the fine arts college in Buenos Aires. They'd never sell their work. It's like a sin for them. They say that artwork should be sacred. For me, however, I feel that working should mean making a living out of what we do, right?

K: You say that you do not paint Paraguay anymore because you have closed that chapter in your life, and have paid that debt. What was that debt?

EC: I closed the chapter in regards to the visual arts, but I have taken my experience into audiovisual arts. About the debt, I feel that it is something that sooner or later happens to all of us who emigrate from our birth places. I feel that all human beings, especially if you have a certain amount of sensitivity, move from their birthplace due to need, or forced by circumstances, or simply to try on new adventures. However, with time, you feel the need to give something back to your place of origin. This is somehow romanticized, and Paraguayans dream of returning to that place, with building a home for their family, and give back as much as they can.

My decision to paint Paraguay was about regaining my first six years of life. All that work of a young Enrique had satisfied that need for me. I think that sensitive Latin American artists feel a need of transforming their societies in some way. After more than 200 pieces, and the movies I’ve made, I feel that my responsibility of leaving behind a legacy has been fulfilled. Now living in Europe things have changed for me once more. Here the dreams of Latin American artists are carried out in different ways. Here, needs and contexts are different, the artist has permission to be more individualistic; it is more about you as a person. When I arrived here I felt that the external need of giving had been satisfied.

K: Do you think there's a difference between the art people in Paraguay and those in other countries?

EC: I think you needn't think about the audience. You need to think about art history, about what's universal. The artist who paints for a specific audience, to sell, is underestimating him or herself. I paint for myself, I don't know who I paint for.

I have painted works that are unsellable for the “lapachito” and the “decorative style” way of thinking, and they were sold anyway. I have no Paraguayan works with me right now, everything was sold, even those that were impossible to sell. The audience is always open to new things. Painting for selling translates into comfort, and art is uncomfortable, you can never feel comfortable.

Further detail on Collar's testimony and work in the following video created by Kurtural as a part of the series (English subtitles are available):