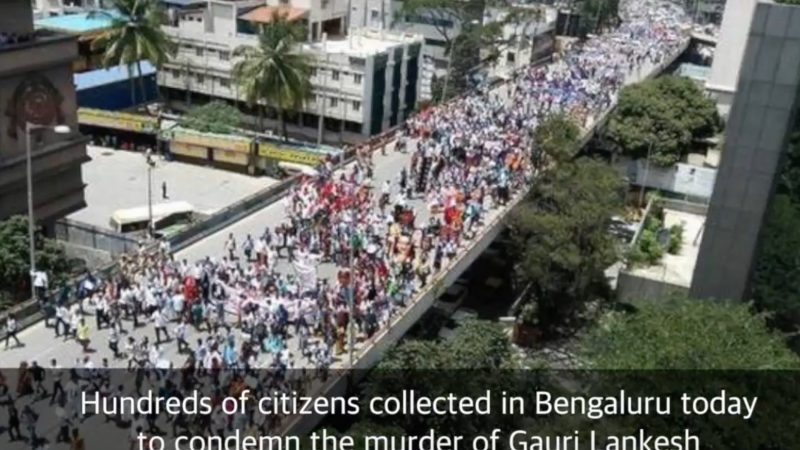 Screenshot from YouTube video “Silence is not an Option” uploaded by lumiphernia.

Nearly 15,000 people demonstrated in Bangalore on September 12, 2017 to condemn the murder of veteran journalist Gauri Lankesh the week before.

The protest gathered people from various walks of life, including journalists, academicians, filmmakers, actors, students, and farmers around a single message, “I am Gauri,” to demand justice in the case.

Lankesh, 55, was the editor of a Kannada-language newspaper called Gauri Lankesh Patrike that was vocally critical of the right-wing politics of Hindu nationalist organizations and Prime Minister Narendra Modi.

The newspaper that Lankesh edited and published did not take advertisements but relied on subscribers who were mostly from the lower class. A commemorative edition was launched during the Bangalore rally.

#IAmGauri
Commemorative edition of Gauri Lankesh Patrike released at bangalore resistance event
Her mother says ‘you are all gauri’ pic.twitter.com/ioVZiS0SrD

On the same day, journalists and friends such as Sudhamshu Mitra, Sudipto Mandal and others launched a blog to aggregate translations of Lankesh's writing and mainstream and social media mentions of her.

The shrinking space for speech

Lankesh's death by assailants riding motorcycles on September 5, 2017, has highlighted how increasingly dangerous India is becoming for reporters and how their civil rights are being deteriorated in a climate dominated by Hindu nationalists.

She had expressed concerns in a series of recent interviews with various Indian publications including TheWire.in and NewsLaundry about the state of free speech in India. She herself had been convicted of defaming two politicians from the ruling political party Bharatiya Janata Party (BJP) in November 2016 and sentenced to six months in prison. According to reports, she had secured bail and was appealing the case.

In the wake of her killing, Prime Minister Modi and the BJP have faced renewed accusations of creating an atmosphere of hatred and polarisation across the country that has lead to persecution and violence against minorities, including Dalits and Muslims, and anyone who promotes a secular, diverse India.

But the BJP has pushed back against linking their politics to Lankesh's murder.

In the lead-up to the protest in Bangalore, a spokesperson from BJP, Ashwath Narayan held a media conference where he announced that protesters’ speech would be “monitor[ed]” and warned anyone who blamed the “Sangh Parivar” — referring to the family of Hindu nationalist organisations — would be sued.

Also before the protest, the youth wing of BJP served historian Ramchandra Guha a legal notice threatening him with civil and criminal defamation suits if he didn't apologize for linking the most prominent Hindu nationalist organisation, Rashtriya Swayamsevak Sangh (RSS), to Lankesh's murder.

Cartoonist Satish Acharya took a jibe at this development with his graphics:

‘We are up against the largest machine of hate’

At the protest in Bangalore, which was organized by various civil society groups under the umbrella of “Gauri Hatye Virodhi Vedike” (“The opposition movement against Gauri's murder”), speakers warned about the dangerous times India is living in. Journalist  P. Sainath said:

There has rarely been a period of such constructed, deliberate terror and hatred. We are up against the largest machine of hate. There will be incredible provocation in coming days, but you should not fall for those traps of hatred.

An installation comprising black umbrellas was made by protesters, as tweeted by journalist Sagarika Ghose:

Journalist Anusha Ravi provided a glimpse of the protests:

Massive is probably an understatement for the numbers gathered for #IAmGauri protests in Bengaluru. pic.twitter.com/6tjfWQXzSG

Activist Kavita Krishnan applauded the spirit of the protests:

Sidharth Chadha, who lives in Sweden, shared a short video created with the images of the rally with the following message:

Silence is not an option.
In solidarity with friends and journalists in Bangalore.

And Rekha Raj, an eminent Dalit feminist writer working for Amnesty International, participated in the protest and posted photos on Facebook:

Meanwhile, many supporters of BJP and other Hindu nationalist organisations took jibes at Lankesh and the protest:

#IAmGauri
I used to abuse Hindus , RSS & BJP – nothing happened to me except some court cases.
I abused ultra Left and was instantly killed

Hate speech in public discourse in India is growing, and Lankesh's murder is seen as a clear warning to the voices in India who express dissent that intolerance is growing. If the space for civil debate continues to be squeezed, the country risks violence and intimidation by the people in power becoming the new normal.

Additional reporting on this post was done by a guest contributor who wished to remain anonymous, due to security concerns.