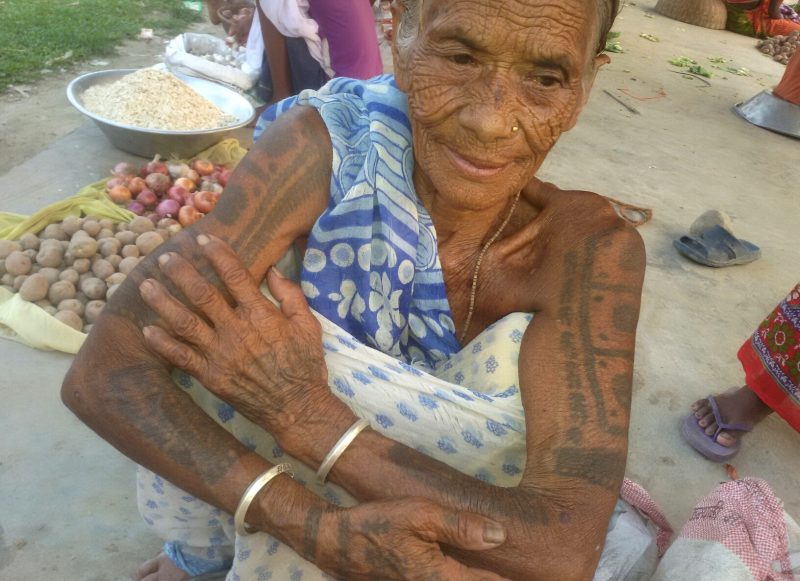 Kalarvati Chaudhary, 61, remembers her younger days when talking about the tattoos of betel nut palm, peacock and other motifs inspired by nature on her body. Photo: CK Kalyan Tharu. Used with permission.

For centuries, tattooing has been an integral part of life for the indigenous Tharu people living in the southern plains of Nepal. Now, as the Tharu people face modernization, the tattooing practice is losing its importance among younger generations.

Tharu women wear tattoos on their arms, legs, and chests as a beautification practice. The tattoos, called khodaha and godna in the Tharu language, are inspired by nature. The most common tattoo motifs are lines, dots, crosses and other various natural elements.

Traditionally, young women could decide to wear tattoos as permanent jewelry, whereas all married women must have compulsory tattoos on their legs applied prior to marrying, typically in the month of March during the wedding season (the months of Falgun-Chaitra in the Bikram Sambat calendar). Today, however, neither the married nor the young Tharu girls choose to wear tattoos.

In ‘Tatooing Among the Tharus of Dang Deokhuri, Far Western Nepal’ a paper published in 1975, researcher D.P. Rajaure captures the aesthetic essence of tattooing among the Tharu:

The main reason for tattooing among these Tharus is aesthetic. According to them, young and unmarried girls do not need and hence do not have to decorate themselves by tattooing because their bright and colourful cholyas (a kind of blouse with its opening in the back) are beautiful and decorative; but a married woman has to get herself tattooed to compensate for the lack of beauty or decoration brought about by donning jhulwa or dainaha jhulwa, a kind of ladies’ shirt with full sleeves, double-breasted and opening in the front.

Traditional tattooing practices were painful and gruesome. Tikaniya (tattooers in Tharu) used tattooing needles and natural black ink obtained from the soot of a mustard lamp. The slow process sometimes caused fainting.The artist rubbed the body part to be tattooed with cow dung and later cleaned the area with water. After drying, mustard oil was applied to soften the surface of the skin. The tikaniya then marked the designs and pricked the skin with tattooing needles.

In the old days, when girls of my age were young, a man from India would come and do these tattoos in our bodies. When my friend was being pierced, I could see tears in her eyes because of the pain and I remember being afraid as I was next. That night I couldn't sleep. The next day I asked my mother why I had to get the tattoo. She said, ‘Who will marry a girl without a tattoo? No one will take you unless you have them.’

Aside from beautification, another key reason Tharu women tattooed themselves was to avoid the attention of The Royal Nepalese, who hated tattoos associated with tribal and indigenous peoples. Tharu tattoos prevented nobles from abducting and keeping them as sex slaves.

Despite a rich tattooing history, Tharu youngsters do not get tattooed. Experienced tikaniyas are no longer found in the villages and younger generations have not yet come forward to steer this age-old tradition.

However, as tattoos become increasingly more fashionable with safer, quicker and easier technology, it's trendy now to document and post tattoo patterns worn by Tharu women elders online, sparking a renewed interest in the art form.

Journalist and photographer ‘Travelin’ Mick,’ heavily tattooed himself, has been traveling and documenting the last remaining tattoo cultures throughout the world for the last 15 years, including Nepal. Here's a look at an array of intricate traditional tattoo patterns that may fade into memory if the Tharu art of tattooing disappears:

Perhaps as young Tharu are reintroduced to the art of tattooing via social media, incorporating new colors, designs and patterns inspired by traditional designs may reignite this age-old tradition.

A variant of this story was published in the ECS magazine.