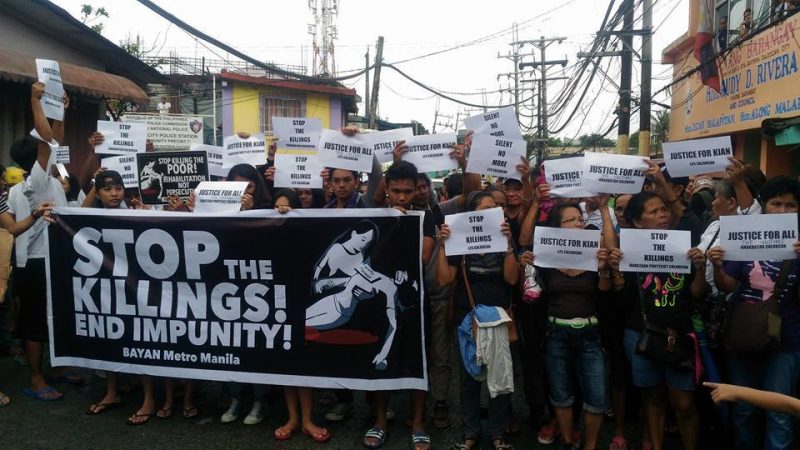 Public anger is rising in the Philippines over the successive killings of teenagers while under police custody.

President Rodrigo Duterte's directive to end the drug menace has claimed the lives of almost 13,000 people, most of them coming from poor urban communities.

In the case of Kian delos Santos, police reported that the teenager was a drug courier who was killed in a shootout during an anti-drug raid.

However, a CCTV recording in the crime scene showed a defenseless teenager being dragged by the police before ending up dead.

Delos Santos was killed in Caloocan City last August 16, 2017, in the same week that Tokhang achieved the highest death toll on a single day in Bulacan, a province to the north of Manila. President Duterte praised this bloodbath:

Maganda ‘yun. Makapatay lang tayo ng mga [That was good. We could just kill] another 32 everyday then maybe we can reduce what ails this country.

Duterte has told the police on various occasions to shoot drug suspects who fight back, make them fight if they don’t, give a gun to suspects who are not armed and to shoot them if they retaliate. Delos Santos’s killing exposed how the police has been planting guns and other evidence against suspected drug peddlers.

Just days after Delos Santos’s death, Carl Angelo Arnaiz, a state scholar from the University of the Philippines, was found dead on August 28, 2017 in a Caloocan morgue after going missing for 10 days. He was last seen leaving his house to buy food with Reynaldo De Guzman, who was found dead 20 days later in a creek in Gapan, Nueva Ecija, a province located north of the capital Manila.

De Guzman's head was wrapped with tape and his body has 30 stab wounds. This was about 113 kilometers away from their residence in Cainta, Rizal.

Official police reports say Arnaiz was killed in a shootout with police after he tried to rob a taxi driver. An autopsy report points to Arnaiz’s body bearing signs of torture before being shot five times execution-style. 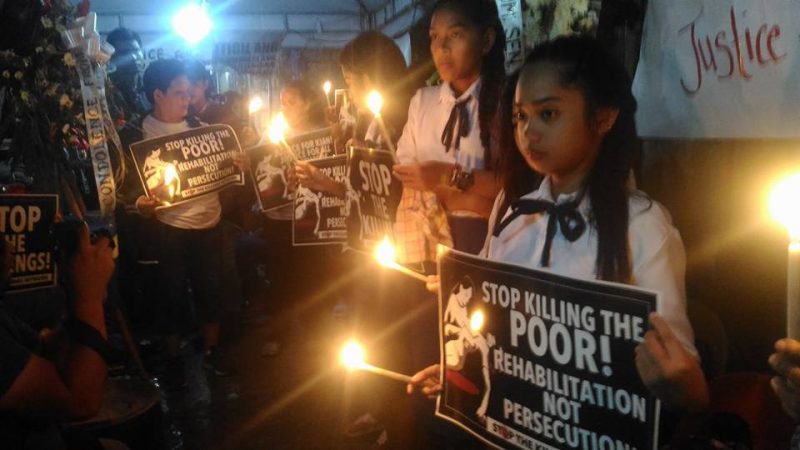 These deaths have sparked public outrage against the “war on drugs,” which is denounced by many as a bloody conflict waged by the Duterte government against the country's vulnerable populations like the poor and children. Various human rights groups have also hit at Duterte for repeatedly vowing to save police officers who commit abuses during Tokhang operations. The youth group Anakbayan said in a statement:

This could happen to anyone as bloodthirsty Duterte continually encourages the police to kill without due process, plant evidence, and cover up in the course of his bloody “war on drugs”. We must stand up against Duterte’s madness to save the country’s youth.

Many decry the way members of disadvantaged communities are killed with impunity while prominent personalities linked to the illegal drug trade, including Duterte’s own son, Davao City Vice Mayor Paolo Duterte, are given due process.

Paolo Duterte recently appeared in Senate hearings to deny his alleged involvement in the smuggling of US$125 million worth of illegal drug substance methamphetamine, popularly known in the Philippines as shabu.

Duterte’s troll army at first branded the murdered teenagers as criminals who deserved to die,but later on, as public anger escalated, they modified their stance and claimed it was Duterte’s political rivals who orchestrated the killings.

Faced with growing uproar over the killings, Duterte himself changed his position by meeting the parents of delos Santos and then Arnaiz and assuring them that he would go after erring police officers. Duterte subsequently claimed that “malignant” forces are sabotaging his anti-drug campaign. 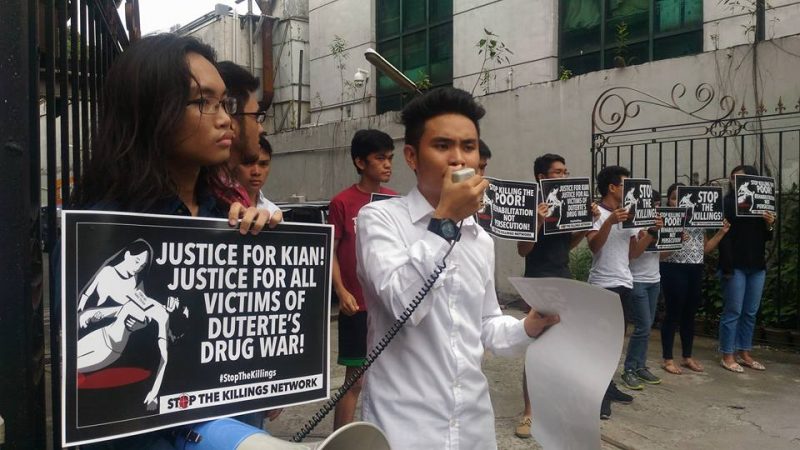 State scholars from the University of the Philippines hold a protest at the Department of Justice in Manila City. Photo credit: Manila Today. Used with permission.

Meanwhile, more and more are overcoming the atmosphere of silence and fear by expressing their anger over the killings. Various people’s organizations, church groups, and ordinary individuals have joined forces in launching the broad alliance Movement Against Tyranny to oppose rights abuses and the country's slide into strongman rule under Duterte.

The group will hold a big protest at Luneta Park on September 21, the anniversary of the declaration of martial law by the late dictator and Duterte's idol, Ferdinand Marcos.