Among a Rising Tide of Extremism in Syria, Women's Freedoms Hang in the Balance 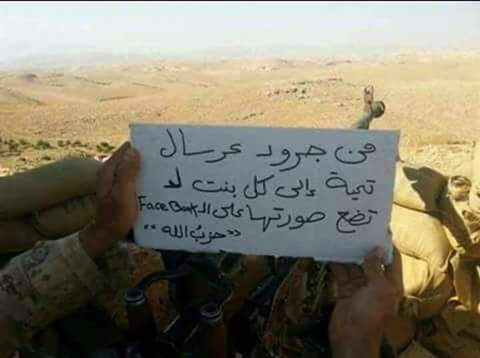 The widely shared photo first shared by a Hezbollah soldier reads “From Juroud Arsal salute to every woman who is not using her own photo as a profile picture on Facebook. Hezbollah.” Source: Diana Moukalled.

In early September 2017, a piece of paper with a potent message targeted against women, held by a group of Hezbollah fighters in Juroud Arsal, Eastern Lebanon, went viral.

The message, which celebrates “every woman who is not using her own photo as a profile picture on Facebook,” emerged as pitched battles raged between Hezbollah, the Iran-backed Shiite militia and the Syrian Sunni al-Nusra Front (officially a former Al Qaeda affiliate) in the area straddling the Syrian-Lebanese border.

This came on the heels of a widely-circulated video of Sami Khadra, a renowned Shiite Lebanese cleric, asking women to replace their photos on Facebook, considered inappropriate and profane, with images of “trees” and Quranic verses.

The video came under attack by social media users and women's rights activists, igniting a storm of sarcastic comments, but also some support.

One woman retorted, “you put a tree” while another woman posted a photo of herself next to trees saying “I tried looking for a photo with lots of trees.” One man, however, said that the cleric's words “are beautiful and represent true Islamic thinking.”

Badia Hani Fahs, a writer for the Lebanese An-nahar newspaper and daughter of the renowned late anti-Hezbollah Shiite cleric Hani Fahs, lashed out in a Facebook post at Sami Khadra's remarks:

Use a tree instead of your photo…A piece of wood, a table…Use an image of a monkey, a female dog or a jennet [female donkey]…May Allah curse their empty turbans!

Lebanese journalist and filmmaker Diana Moukalled mocked the picture of Hezbollah fighters in a tweet, poking fun at their claims of liberating women from’ takfiri’ (infidel in Arabic) while aping their conduct.

From Juroud Arsal a call for women not to post their photos on Facebook…[It is laughable that] these are the same people claiming to be saving us women from takfiris who take women as sabaya (women captured during war).

Fighters in the heat of a raging battle with time to consider women's social media habits seemed so far-fetched and ironic that critics drew comparisons with the Islamic State in Iraq and Syria (ISIS) and other extremist groups. Many others derided the Shiite group's alliance with the Syrian regime that has long boasted its secularity.

In Idlib province, a painted sign reading “The Woman is Awra” made its rounds in 2015. 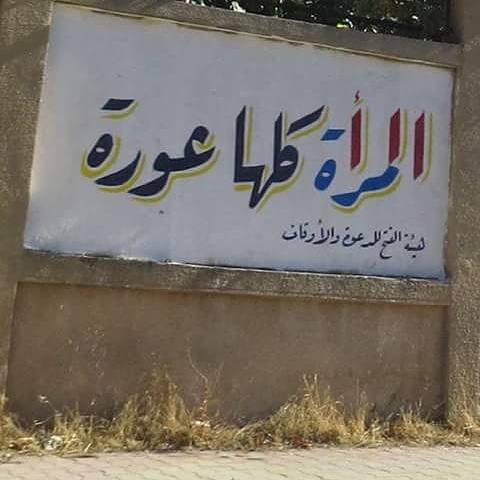 “A Woman is Awra” followed by “Idlib Religious Mission and Endowment.” Source: Raseef22.

Both ISIS and al-Nusra impose austere dress codes on women based on a rigid interpretation of Sharia law. Proponents claim the code is intended to “protect” women as “jewels” and “hidden pearls.”

This claim, however, is considered an outright human rights violation by all major human rights organizations as well as Article 1 of the United Nations Universal Declaration of Human Rights.

Despite the spread of a large number of civil society organizations dedicated to supporting the role of women and bolstering their participation and position in society in opposition areas, women's role in the Syrian workplace has not registered a notable advance, but has actually seen a relative decline.

Groups such as Hezbollah, al-Nusra, and ISIS, all stakeholders in the current Syrian war, have consistently promoted discriminatory views against women. These groups promote policies that treat women as inferiors and restrict their basic rights including movement, dress and the use of social media.

Failing to comply carries grave consequences, the mildest being social and religious shaming while the harshest amounts to whipping and fines.

In 2015, breath-taking videos showed elated Syrian women ripping off Islamic garments after escaping persecution under ISIS, a public outpouring of ecstasy that captured the world's attention:

While some Syrian women celebrated liberation from ISIS-controlled areas, the emergence of new messages targeted at women sparks pessimism among women and women's rights activists concerned about their futures under any of the warring groups.

Five years ago, four Syrian women dressed in bridal gowns staged a peaceful march in the heart of Damascus to demand wider freedoms and an end to military operations. Yet today, many Syrian women still grapple with authorities to secure their most basic human rights.

Extremist groups like ISIS and al-Nusra are undermining the freedoms that Syria’s women and girls enjoyed, which were a longtime strength of Syrian society. […] What kind of victory do these groups promise for women and girls who are watching their rights slip away.

Any hope kindled by early pro-democracy protests has dwindled, making it difficult to ameliorate the situation for Syrian women. Political parties whose agendas neglect women's rights have seized control of the indefinite future.