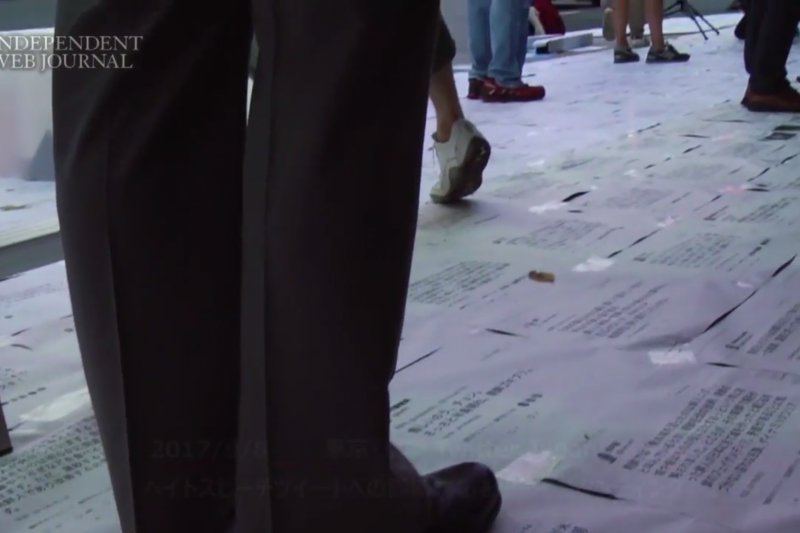 Protesters tread on printouts of abusive tweets in front on Twitter headquarters in Tokyo, Japan, on September 8. Screencap from IWJ official YouTube channel.

On Friday, September 8, about one hundred demonstrators gathered outside Twitter Japan's Tokyo headquarters to demand that the company do more to rein in harassment and hate speech on its network.

Tokyo No Hate, a volunteer collective of activists, led the demonstration, highlighting Twitter's seeming reluctance to tackle the problem.

The group had reported a series of discriminatory and hateful tweets to the company on September 3 and asked Twitter to remove the tweets by September 7. They pledged to demonstrate the next day in front of Twitter's Japan headquarters if the company failed to do so.

Borrowing tactics from a recent protest in Berlin and organized using the hashtag #0908Twitter社前 (“Meet in front of Twitter on 09/08), protesters gathered in front of Twitter's Tokyo office on September 8 and covered the sidewalk with print-outs of tweets communicating sexist, racist and violent messages.

Activists displayed hundreds of abusive tweets, some of which were photographed and shared on Twitter itself.

Tweet: ‘Chon’ (a slur used against Koreans) are savages, aren't they?

Hate speech is not limited to just racial discrimination.

Middle tweet: Women are an inferior species, and therefore must be extinguished.

With sex crimes, the victims are the most blame, especially women.

Ultimately, participants were encouraged to tread on the printed tweets, and at the end of the demonstration the tweets were ceremonially deposited in a recycling bin.

More offensive tweets identified by the demonstrators have been translated into English by activist Takahiro Katsumi in this Twitter Moment.

With 40 million active users — accounting for about 30% of the national population — Twitter is one of Japan's most popular and commonly social networks.

While Twitter does take some measures to keep threatening and hateful speech off its network (including the recent suspension of a user who threatened to kill a mosquito), there are complaints that other kinds of threats and harassment on Twitter are ignored.

Toshiki Kino, an internet activist and former chairperson of Tokyo No Hate, told Global Voices that Twitter has been “completely inactive” in regulating hate speech against ethnic minorities in Japan:

Hate speech against ethnic minorities people in Japan—mainly against Korean and Chinese people, but also against the Ainu [indigenous residents of Japan] on the Internet has been a very serious problem in recent years, but Twitter Japan has been completely inactive in terms of regulating such remarks. There is much hate speech on Twitter to choose from, but you'll see lots of serious examples if you search for “朝鮮人” [‘chosenjin’, a derogatory epithet for Korean people.]

Although Twitter does not explicitly prohibit hate speech, their official rules forbid users from attacking or threatening a person on the basis of their identity traits. This rule reads as follows:

You may not promote violence against or directly attack or threaten other people on the basis of race, ethnicity, national origin, sexual orientation, gender, gender identity, religious affiliation, age, disability, or disease. We also do not allow accounts whose primary purpose is inciting harm towards others on the basis of these categories.

While Twitter asks users to abide by this and other rules, it has no hard and fast mechanism for enforcing them. If you want a hateful or threatening tweet removed, you may file a report with the company. Then, it is up to Twitter's moderators to determine whether or not the tweet actually violates company rules.

This method can be helpful if you see just a few hateful tweets each day, but such tweets often come by the hundreds and can swiftly become unmanageable for any user. And it is likely that the problem is similarly daunting for people moderating these reports (the company provides almost no public data on the issue.)

Indeed, in many cases, several of which were highlighted by the No Hate protesters, hateful tweets are reported but not removed. The company has long faced criticism that its moderation system is no match for the scourge of hate speech online, but thus far, it has not devised an alternative solution.

Some observers wonder why the activists are targeting Twitter, rather than going after the groups that create abusive content online.

In a series of tweets, researcher Vivian Shaw, who has covered the evolution of the anti-discrimination movement in Japan since 2011, explains that anti-racism activists in Japan have pressured the Japanese government to pass legislation addressing hate speech and worked with local authorities to help address the problem.

Japan's national parliament, the Diet, passed the country's first-ever law addressing hate speech in May 2016. The law defines hate speech in Japan, but it does not criminalize it. Instead, the law compels the central government, prefectures and municipalities, such as the city of Osaka, to devise measures against hate speech.

The challenge now, according to Shaw, is that local governments say they have neither the resources nor the technology to police abusive content online. Because Twitter creates the environment in which these messages are circulated, activists argue that the company should be doing more to combat it. If hate speech were officially a crime in Japan, Twitter would be under greater obligations to mitigate the problem. But the Diet has not taken things this far.

At the end of the protest in Tokyo on September 8, protestors entered the lobby at Twitter's headquarters in Japan, hoping to meet with the company. The activists were unsuccessful, although the protest did generate significant discussion on Twitter itself.

While the protestors did not get to meet with Twitter, the company did acknowledge their concerns in the leadup to the demonstration on September 8. In a tweet made earlier in the week, Twitter Japan did mention it plans to increase the number of moderators “to resolve issues promptly” (早急な問題解決に).

Thanks to so many of you for expressing your concerns to Twitter. While we wish (to make Twitter a place) where everyone is comfortable expressing their opinions, we'll sincerely take your feedback to heart. Twitter has recently increased the number of moderators in Japan, and is working to resolve issues promptly. Please continue to provide us with your feedback.