Pioneering Theatre in Azerbaijan Offers a Stage to Actors with Disabilities 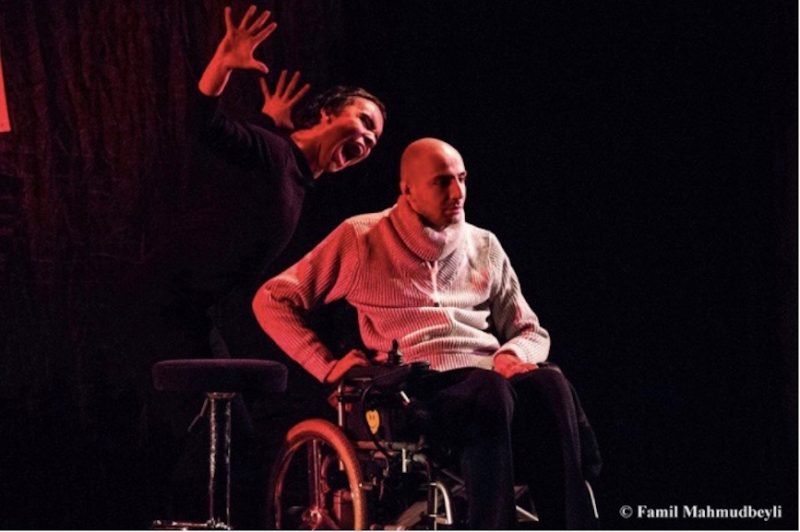 A performance at ƏSA, the first theater in Azerbaijan dedicated to bringing together actors with and without disabilities. Photo by Famil Mahmudbeyli.

The following is a partner post from EurasiaNet.org written by Durna Safarova. Republished with permission.

“Do not be ashamed of your own body. Do not be shy because of your body, no matter what shape it is,” the man says, stripping off his shirt as the audience watches, rapt.

The man on stage, a painter with schizophrenia, is one of the characters in DUMB, a psychological drama performed at ƏSA (“walking stick” in Azerbaijani), the first theater in Azerbaijan dedicated to bringing together actors with and without disabilities.

As in many places, people with disabilities in Azerbaijan face stereotypes and prejudices portraying them as dependent, incompetent and unhappy. ƏSA’s founder, Nihad Gulamzade, said he founded the theater – the first of its kind in the Caucasus – to fight those misperceptions.

“This is not a social project, it’s not a hobby, we are working professionally,” Gulamzade told EurasiaNet.org.

Gulamzade, an accomplished actor, musician, and photographer, does not have a disability. He describes the inspiration for the theater as coming during a period of deep depression. He was contemplating suicide, he said, but imagined what would happen if his attempt were unsuccessful. “I would live my whole life as a disabled person and wouldn’t be able to act,” he recalled thinking.

DUMB, which opened last September, was ƏSA’s first production. The theater also has put on a production of Shakespeare’s A Midsummer Night’s Dream, partially funded by the British Embassy in Azerbaijan, which oversold the theater’s 370-person capacity. “If we had a 1,000-seat hall, I think we could fill it,” said Gulamzade.

The theater’s success is due not just to the novelty of featuring actors with disabilities, but a more creative approach to the stage, Gulamzade said: “The theater scene in Azerbaijan was colorless. We tried to make it lively, and it worked.”

In Baku, where there had been only three independent theater collectives before ƏSA launched, the appearance of a new group was a welcome addition to the city’s cultural life, said Aliya Dadashova, a local theater critic. “The theater scene is not as lively as it was in the early 1990s, when there were more small theater collectives,” she told EurasiaNet.org. “The state theaters don’t have any social or cultural impact, so it’s gratifying to see new initiatives” like ƏSA.

“We unite people from different social groups. You can see government figures and their political opposition watching us. There were people who are theater fans, and people whose first experience was ƏSA,” added actor Orkhan Adigozel. Adigozel is paralyzed as a result of an accident nine years ago, and ƏSA is his first experience with the theater.

“On stage we are just actors,” Adigozel said. “We try to make the audience focus on the play, rather than disability. There is a stereotype that people with disabilities are not able to do anything. We broke this stereotype and try to show that art has no barriers.”

The crew has 15 members, representing a variety of disabilities. Some have cerebral palsy, one does not have legs, another has Down’s Syndrome. A sign language interpreter makes the performances accessible to people who are deaf.

For ƏSA’s actors, transportation is a particular problem. Roads, buses, and taxis are rarely wheelchair-friendly; the only wheelchair-accessible taxis are operated by the government backed Baku Taxi Company, known for its purple, London-style cabs. But one ride costs 20 manats (about $12). Half of the theater’s production budget is devoted to taxis, Gulumzade said. “If one actor in a wheelchair pays 20 manats and he has to come to at least 30 rehearsals, see how much the cost of transport is for a single person,” he said.

Gulnar Alfidatli, a 23-year-old actress at ƏSA, has cerebral palsy. She has an accounting degree and had a job at a private company, but was fired, she said, after her bosses realized she had a disability. “ƏSA is my first theatre experience,” she said. She recalled her first performance, which got a standing ovation. “It was like we were in a magical dream,” she said.