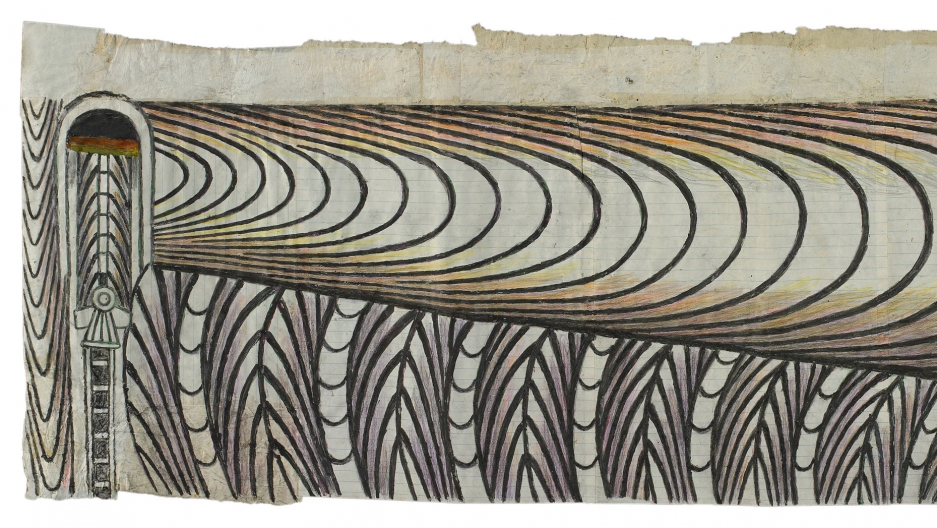 This work by Martí​n Ramírez is known as “Untitled (Train and Tunnels).” Ramírez used crayons and glued together pieces of paper to make his drawings. Credit: Courtesy Ricco/Maresca Gallery

This story by Gisele Regatao originally appeared on PRI.org on August 24 2017. It is republished here as part of a partnership between PRI and Global Voices.

A Mexican immigrant who was institutionalized in mental hospitals in Northern California for more than 30 years is now considered by some critics to be one of the best artists of the 20th century. And he’s getting his first major retrospective in Los Angeles.

The Institute of Contemporary Art Los Angeles, or ICA LA, is opening its new home on Sept. 9 with a show featuring about 50 drawings by Martín Ramírez, who died in 1963 at the age of 68.

The show comes at a time when new research is questioning Ramírez’s label as an “outsider” artist and is defining him as a master of the immigrant experience.

“He is an immigrant artist. His art is very important to understand displacement, to understand borders, how people cross borders,” says Victor Espinosa, author of the book, “Martín Ramírez: Framing His Life and Art.”

Espinosa, who teaches at The Ohio State University, spent 10 years researching Ramírez. And he questions whether Ramírez really was schizophrenic. According to Espinosa, Ramírez was diagnosed after a brief psychiatric consultation where there was no translator. But Ramírez didn’t speak English. Espinosa says Ramírez kept saying, “Me no loco” (“I am not crazy”), but the doctors concluded otherwise.

“With this kind of diagnosis, it’s impossible to leave the institution,” Espinosa says. “Ramírez didn’t have anyone on his side to question the diagnosis, to do anything.” 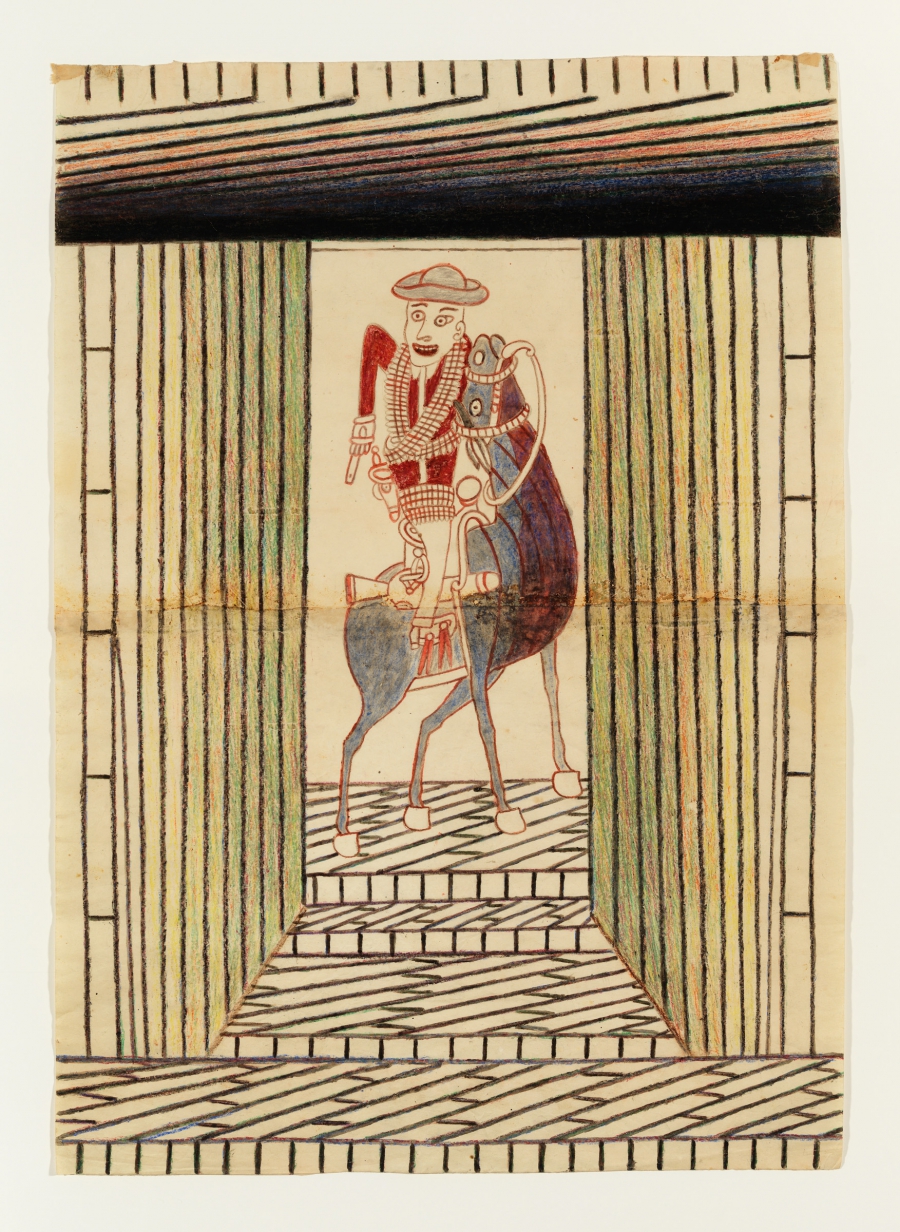 This piece by Martín Ramírez is labeled as “Untitled (Horse and Red Rider).” Credit: Courtesy of Ricco/Maresca Gallery

Ramírez moved to the United States for work in 1925, leaving behind a pregnant wife and three kids in Jalisco, Mexico, to look for work in the railroads and mines in California. A few years later, though, the economy crashed. And he lost his job and started living in the streets.

That’s when the story gets a bit murky. According to Espinosa’s research, Ramírez apparently misunderstood a letter from his family and cut ties with them. He wound up homeless and destitute, and in 1931, he was picked up by authorities. Espinosa says Ramírez was confused and probably depressed and ended up institutionalized.

And he remained in mental institutions for the rest of his life.

While he was there, Ramírez began drawing Madonnas, cowboys, horses, trains and tunnels — inspired by the churches and farms of his native Mexico, as well as his journey to the United States. He didn’t have paint or canvases; he used crayons and glued-together pieces of paper to create large drawings. Sometimes he used collages from magazines. His tracing is figurative, but also modern.

Out of the perhaps thousands of drawings Ramírez made, about 500 have survived.

One of his Madonnas now lies in a vault at the Library of Congress in Washington, DC. Tracey Barton, a senior archives technician in the manuscripts division, found the drawing in 2009, rolled up in a box of the belongings of American designers Charles and Ray Eames.

“I have worked at the library for 35 years, so that’s pretty much the greatest thing that happened to me here,” Barton says.

The artist as a mythical figure

Ramírez’s art might never have been seen outside the mental hospital where he lived if it hadn’t been for Tarmo Pasto, a professor who studied art made by psychiatric patients. Pasto became interested in Ramírez’s drawings and helped organize his first art show at the E.B. Crocker Art Gallery in Sacramento, California, in 1952. But the drawings were presented as the work of an anonymous schizophrenic patient, not an artist.

“That narrative is hard for the art world to unabsorb because it’s sexy and enticing, and it reaffirms that the artist is some mythical figure,” says Brooke Davis Anderson, director of the museum of the Pennsylvania Academy of the Fine Arts, and curator of a major show about Ramírez at the Folk Art Museum in New York in 2007. She says it’s time to change that narrative. 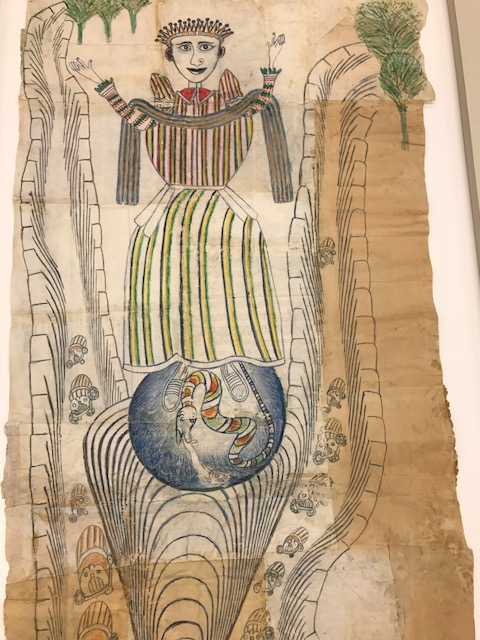 This Martín Ramírez drawing of a Madonna was found rolled up in a box of the belongings of Charles and Ray Eames. Credit: Courtesy of the Library of Congress

The fact that Ramírez was seen as a mythical figure also meant nobody looked for his family until Victor Espinosa tracked them down in Mexico in 2000. The family then sued to get the rights over Ramírez’s work. Frank Maresca is the co-owner of the Ricco/Maresca Gallery in New York, which now represents the estate for Ramirez’s 20 grandchildren. He says even though Ramírez’s major works sell for a half-million dollars, and his drawings are in the collection of some major New York museums like the Guggenheim Museum and the Museum of Modern Art, others such as the Metropolitan Museum of Art or the Whitney Museum of Modern Art don’t own a Ramírez.

“I think they believe it’s less than that which is produced, that comes out of the academy,” Maresca says. “I can’t think of any other reason about why it hasn’t happened. There is no other reason.”

Donna De Salvo, a senior curator at the Whitney, acknowledges the shortcoming. “We probably are behind, frankly,” she says. “There are a number of Latinx artists who are not in our collection, and it’s something we are very aware of and we are working on bringing some consultants who have the expertise.”

Victor Espinosa says you won’t find Ramírez’s work in any museums in Mexico, either. The Regional Museum of Guadalajara, close to Ramírez’s hometown, said they have no information about the artist.

They apparently aren’t aware that the US Postal Service released a set of five commemorative Martín Ramírez stamps in 2015.

The only other Mexican artist believed to have been honored that way was Frida Kahlo.