Irma: A Meditation on Hurricanes and the Bahamas 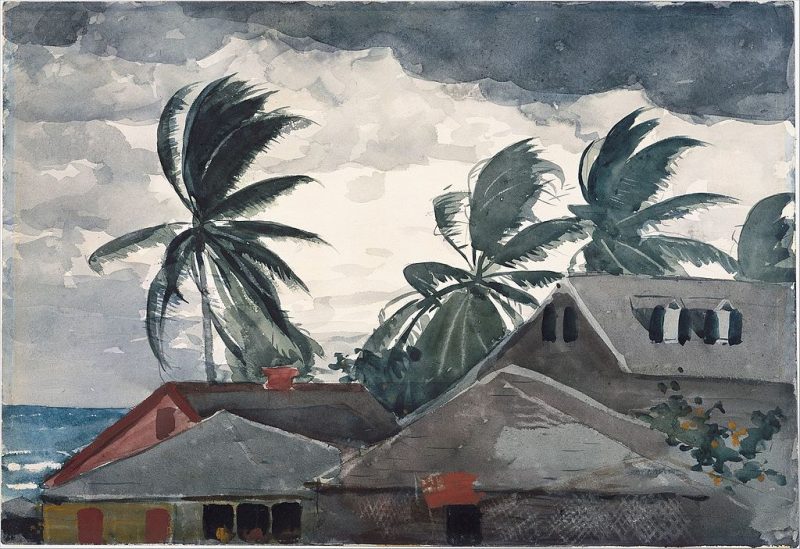 Hurricane, Bahamas. Winslow Homer (1898). Image donated to Wikimedia Commons as part of a project by the Metropolitan Museum of Art.

This article appeared originally on Blogworld and is republished here with the author's permission.

Anyone who has grown up with me knows that I’m not a person to take hurricanes lightly. When I was 17, I wrote an extended essay on the subject. The essay required me to delve into the science behind hurricanes, and also sent me to the archives in search of the impact of hurricanes on The Bahamas.

I knew about the 1929 hurricane, of course; my grandmothers’ generation had survived it, and they would tell us stories of the bad old days when hurricanes came along every year and pass directly over Nassau. And the history books I had at my disposal (Michael Craton’s 1968 edition of A History of The Bahamas and Paul Albury’s 1975 The Story of The Bahamas) mentioned an earlier hurricane, one from 1866, which also devastated Nassau. I read everything I could get my hands on about both hurricanes. And then, for the next decade or so, I was a hurricane prophet, warning my family (really, anyone who would listen) to get ready every year. Because, although Nassau had not sustained a major hit for a good 20 years or so, I just knew it was going to be a matter of time.

Well, as we can see, it was. New Providence was struck directly in 2001 by Hurricane Michelle, whose eye passed over Nassau, and then almost struck directly by Hurricane Matthew in 2016, whose eye shifted just to the west of our island in the last hours before it struck. But nothing yet has impacted the capital the way the hurricanes of the 1920s and the 1800s did.

What the past can teach us

The Bahamas, like the USA, historically sits outside the most common path of hurricanes. The majority of our archipelago lies above the Tropic of Cancer, in the sub-tropical zone, and at least until the end of the twentieth century, most hurricanes tended to form and stay within the tropics, crossing the Atlantic to the Caribbean Sea and then sweeping up the Lesser Antilles. This was disastrous for the Caribbean but fortuitous for The Bahamas, as the Caribbean islands tend to be mountainous, and mountains help to break up hurricanes’ organization. The most common result was that by the time that hurricanes reached The Bahamas, even major ones like Inez and David and Georges, they had dissipated and were reduced to Category 1 or 2 hurricanes, or even to tropical storms.

Every thirty years or so, however, some regular shift in global weather patterns appeared to encourage the formation of hurricanes further north and increase the likelihood that they would affect The Bahamas and US eastern seaboard. These hurricanes would sweep across the Atlantic and not be disrupted by land or mountains until they were well inland in the USA. The 1866 hurricane in The Bahamas was one of these, one of the earliest with a systematic plotting of its location and its intensity (believed to be a powerful Category 4 hurricane). Our primary source of information regarding its intensity comes from the barometric pressure recorded during the passage of the storm (for more details, read Wayne Neely’s book). This was followed by another deadly hurricane in 1899; then a series of Category 4 and 5 hurricanes between 1926 and 1932; then Betsy in 1965; and then Andrew in 1992.

For anyone who wants to learn anything about hurricanes in The Bahamas, look to Wayne Neely. He’s the expert. If you want to know who to listen to on social media, check what he has to say. It’s his hobby; but it’s also his training, and his job.

This meant that it was quite possible, at least during the twentieth century, for a Bahamian adult to live and die without experiencing more than one or two devastating hurricanes. My father was such a person. He was born in 1938, and between then and his death in 1987, he experienced only one major storm: Betsy in 1965. His life during the 1970s was spent putting up hurricane shutters when we were under hurricane warnings, only to find out that the hurricane had either blown out to sea, or was nothing more than some wind and rain. And he complained. Our hurricane shutters were heavy wooden things that were fitted into our window frames and held in place with bars of two-by-four. They were hard to put up and hard to take down, and when he put them up only to be disappointed by some storm or other, he refused to take them down until the end of the season. He would unshutter the common areas of our house, but we would spend our nights in the darkness of the closed-up bedrooms.

I imagine that it’s hard for younger Bahamians to conceive of the possibility of going through one’s life without ever experiencing more than one deadly storm. The past twenty-five years have brought an extended period of hurricanes affecting our archipelago, beginning with Andrew, which was Category 5 when it struck Eleuthera from the east, and continuing through Floyd and Michelle and Frances and Jeanne and Wilma and Irene and Ike and Sandy and Joaquin and Matthew and Irma and potentially Jose.  The historical weather patterns affecting hurricanes have changed; the thirty-year cycle that predominated from the 1780s through the 1990s has been replaced with a cycle that we have not yet found a pattern for.

What is most striking about all of this, to my mind, is not the inevitable argument about climate change. What strikes me about this historical survey of hurricanes in The Bahamas is the one glaring fact that we tend to obscure while we are praying to be spared or engaging in rescue and clean-up: that the modern Bahamas fares better in hurricanes than almost any other territory on the planet.

Part of the reason for this comes from our very geography. We have no rivers to overflow and break their levees, and we have no mountains to engender landslides. These are the two deadliest side effects of hurricanes, and they don’t happen to us. But there are other common ways that people die in hurricanes, and delving into our historical archives can tell us what they were. People are drowned in storm surges (as happened in Andros in 1866 and 1929) and people are killed by falling debris when houses are torn apart, when roofs fly off. And since the 1930s the number of houses that are torn apart in The Bahamas has been a whole lot fewer.

That’s because we have learned how to build for storms. I grew up in a house that was built in the 1930s, when we were rebuilding the city after the 1929 hurricane, and the contractor who built that house intended that it would withstand any storm. It is constructed of poured concrete reinforced with steel, and the roof is anchored securely to the walls. It has breezeways above every door to allow for cross ventilation, and it has withstood hurricanes without structural damage since its erection.

I live in another house, this one built in the 1950s, again from reinforced poured concrete, this one raised some three to four feet off the ground (it is built on uneven ground). My parents were born in wooden houses, one of which is still standing, the other which would still be standing if a bulldozer had not ripped it apart. The one thing we learned after the destruction of our grandmother’s home was that it was built by shipwrights, and that there was not a nail in it; it was held together by wooden pegs which grew more secure over time as they swelled into place. The houses on Harbour Island, which was hammered by Andrew when it was a Category 5 hurricane, still stand, while much of Miami, which was hit after Andrew had weakened somewhat, was destroyed.

I live in another house, this one built in the 1950s, again from reinforced poured concrete, this one raised some three to four feet off the ground (it is built on uneven ground). My parents were born in wooden houses, one of which is still standing, the other which would still be standing if a bulldozer had not ripped it apart. The one thing we learned after the destruction of our grandmother’s home was that it was built by shipwrights, and that there was not a nail in it; it was held together by wooden pegs which grew more secure over time as they swelled into place. The houses on Harbour Island, which was hammered by Andrew when it was a Category 5 hurricane, still stand, while much of Miami, which was hit after Andrew had weakened somewhat, was destroyed.

This is what we learn. Bahamians know how to build for storms. It is part of our adaptation to these islands, where evacuation is a twenty-first century luxury for the most sparsely populated islands, but is usually impossible for most of us. We have developed techniques to build homes that withstand hurricanes, and we have also written several of those techniques into our building codes. True, there is more that we could do today, but do not, possibly because of cost. Our grandfathers knew that we should not only build strong and smart, but that we should also build high: most of our traditional houses are raised on blocks and are three or four feet off the ground, and are far less prone to flooding than what we build today.

And that leads me to the second part of this meditation.

What the future can bring

I’ve watched/studied hurricanes for most of my life now. And while I respect them—deeply—I do not believe that Bahamians should fear hurricanes the way we appear to do. On the contrary. I believe that we should look hard at ourselves and work out why it is that we handle major storms so well. Part of it is, yes, our geographical flatness, our lack of mountains and rivers, our ability to hunker down through the storm and then not worry overmuch about the physical aftermath. But part of it is what we have developed ourselves.

I don’t think it’s a stretch to say that Bahamians are the world’s experts on building to survive hurricanes. This is a critical skill that we can share with the world—especially given the fact that major hurricanes appear to be forming more and more often, and growing larger and stronger, and not following the patterns of the past.

For that reason, I believe that we should be in the global hurricane industry.

We are faced with real opportunities. I pray that we have the sense and the courage to take advantage of them.

Nicolette Bethel is a Bahamian teacher, writer and anthropologist. She was the Director of Culture in The Bahamas, and is now a full-time lecturer in Social sciences at the College of the Bahamas. She blogs at Blogworld and tweets at @nicobet.