Azerbaijan Runs $2.9 Billion ‘Laundromat’ but Soros and the ‘Armenian Lobby’ Are to Blame 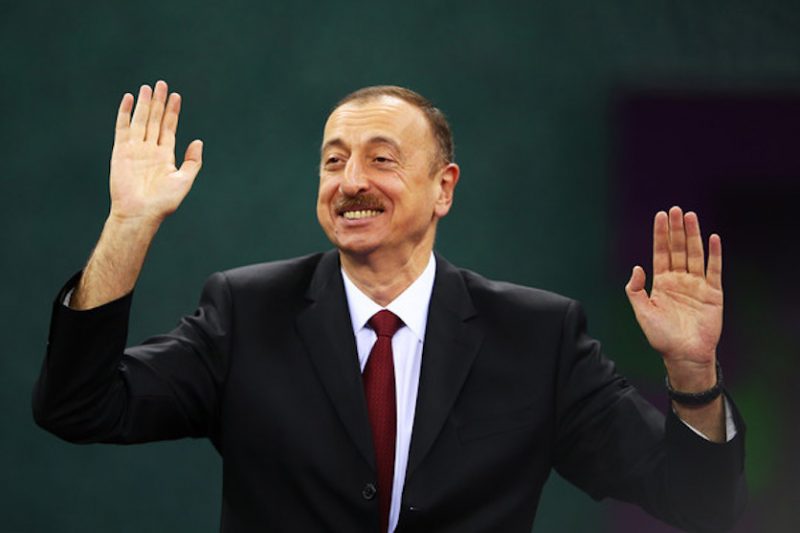 President Ilham Aliyev at the European Games in 2015. Creative Commons.

In a series of new investigations, a network of investigative journalists have discovered the government of Azerbaijan was the driving force behind a $2.9 billion secret slush fund that may have helped it pay off European politicians.

Dubbed “Azerbaijani Laundromat”, the secret slush fund was put in operation between 2012 and 2014, according to the Organized Crime and Corruption Reporting Project:

The Azerbaijani Laundromat is the name given to a complex money-laundering operation that handled US$ 2.9 billion over a two-year period thanks to four shell companies registered in the United Kingdom. Between 2012 and 2014, Azerbaijan’s kleptocratic ruling elites pumped the money through the companies’ Estonian bank accounts. The companies’ true owners were hidden behind unknown offshore shareholders.

The money transfers made into the accounts of politicians in Europe may have helped persuade the Parliamentary Assembly of the Council of Europe (PACE) to vote against a critical report of Azerbaijan in 2013 calling for an adoption of the resolution on political prisoners, although that has not been proven.

Money-laundering operations like the Laundromat are common in the former Soviet republics and are often deeply integrated into their economies. They may be used by government officials, organized crime groups, or even ordinary businesses for purposes such as disguising the origins of money, evading taxes or sanctions, paying bribes, bypassing customs fees, moving funds to Europe or other markets, or embezzling funds.

The Azerbaijani operation, too, was likely designed primarily to obscure the origin and destination of dirty money. It was also used as a slush fund to pay off people (both inside and outside the country) who served the interests of the political elite in Baku; to buy luxury goods; or to move money abroad for various purposes.

[Azerbaijan] used the slush fund to buy silence and praise from influential European figures during a time when the government in Baku threw around 90 activists, journalists and opposition politicians into prison on politically motivated charges.

Out come the trolls

Following the release of the OCCRP investigation patriotic trolls stormed online to accuse journalists of spreading unverified information and maintaining ties to an ill-defined “Armenian lobby”. 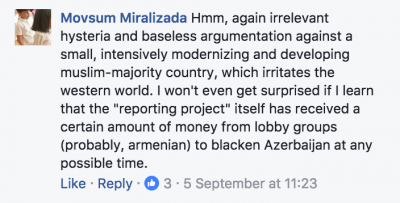 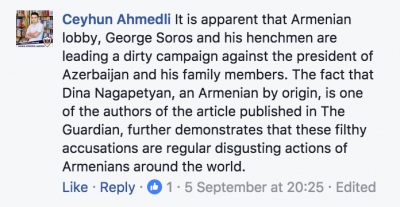 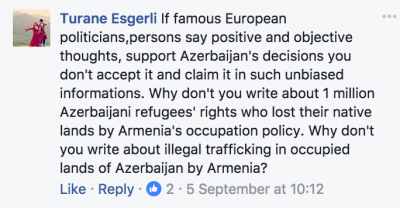 The patriotic trolls used the same texts when commenting under the OCCRP story shared on Facebook.

The positions of the trolls were mirrored almost exactly by Azerbaijani officials, blocked access to OCCRP's website for good measure.

Authorities in #Azerbaijan have blocked the access to OCCRP website after the #Laundromat publication. If you can't bribe them, close them?

The Soros-hatred makes sense in so far as billionaire philanthropist George Soros’ Open Society Foundation has provided grant money to OCCRP in the past. But Hajiyev might have asked the president's media department to remove this picture from its page before embarking on a full-scale offensive.

If the Azeri PR strategy is to go after Soros they should probably get this picture off the president's websitehttps://t.co/CPh3g6P89L pic.twitter.com/kD0r548410

While Azerbaijani authorities were busy refuting any connections with the reports, movers and shakers in Brussels demanded investigations into the deeds of the leaders and politicians named in the investigations.

We want a full investigation into Laundromat scandal. Banks and politicians must be held to account! #Azerbaijan https://t.co/zW9x9dAXEV

The Legal Affairs committee of the parliantary assembly of Europe lashes out at Azerbaijan today on corruption and laundromat pic.twitter.com/X7umC7ciGB

Moreover, Bulgaria's state prosecutor ordered an investigation into new information about payments made by Azerbaijani companies into the accounts of Kalin Mitrev, the country's representative on the board of directors of the European Bank for Reconstruction and Development.

OCCRP published a comprehensive list of reactions to the project's findings on September 8.

Given that corruption provides the basis for the Azerbaijani state and has infested its international relations with the West it is unsurprising that journalists and organisations that draw attention to this problem face serious hurdles and even imprisonment.

Khadija Ismailova, one of the main investigators in the laundromat series, was sentenced to over seven-and-a-half years in prison on trumped up charges in 2015. Although she was released the following year after one-and-a-half years’ jail time in total, the charges against her were not dropped.

Transparency International, perhaps the world's most famous anti-corruption body announced just this month that its Baku office was closing down due to restrictive laws put in place to prevent locally-based civic organisations receiving funding from abroad.

It remains to be seen whether European policymakers will impose similar restrictions on dirty money coming from a certain oil-rich, ex-Soviet state in the South Caucasus.