The Caribbean Comes Together After Hurricane Irma 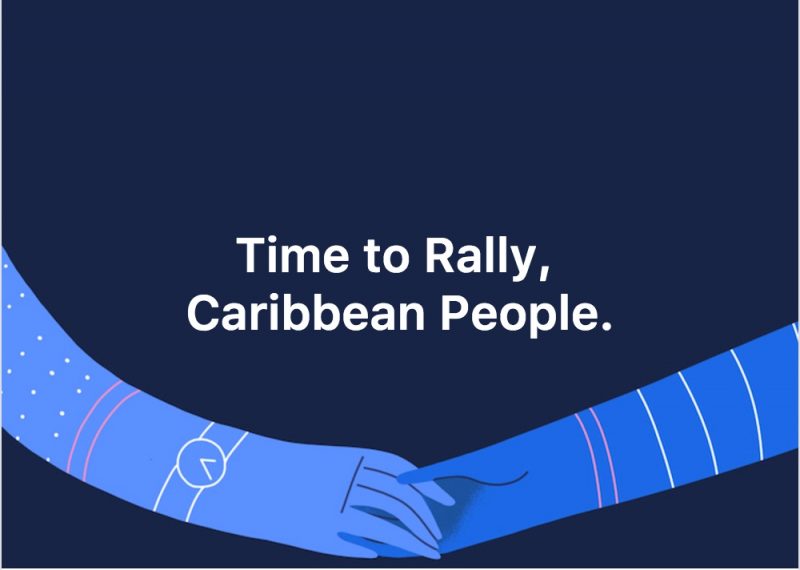 A public Facebook status update posted by Trinidadian Wendell Manwarren after hearing of the destruction caused by Hurricane Irma, which reads, “Time to Rally, Caribbean People.”

It is unusually still in the Caribbean. With nary a breeze, the heat is almost oppressive. But as hurricanes cut a path through the region, skies will turn from blue to menacing grey, and sunshine to downpour in a New York minute — and this is happening further down the archipelago, in territories that weren't even in Hurricane Irma‘s direct path of the northern Leeward Islands.

But despite the lethargy that the weather is inflicting, people are energised, banding together to send supplies, money, and other forms of relief to those affected.

The strongest storm of the Atlantic hurricane season since Wilma in 2005, packing wind speeds of up to 185 mph (295 km/h), Irma quickly became a Category 5 cyclone powerful enough to be picked up by seismographic equipment:

Seismometer recordings from the past 48 hours on Guadeloupe show Cat. 5 #Hurricane #Irma driving closer toward the Lesser Antilles pic.twitter.com/9y3Nuv2Z9E

With the nation of Antigua and Barbuda in the front line on the night of September 5, 2017, there were serious concerns about the country's ability to handle the onslaught:

The smaller of the two islands, Barbuda, was practically flattened and for a time, all communication was lost. By September 6, the prime minister was calling for a complete evacuation of the island, saying it was “uninhabitable”. The damage was so widespread that there was nowhere left for people to shelter in safety — especially since Hurricane Jose is hot on Irma's heels, and seems intent on battering the same targets. 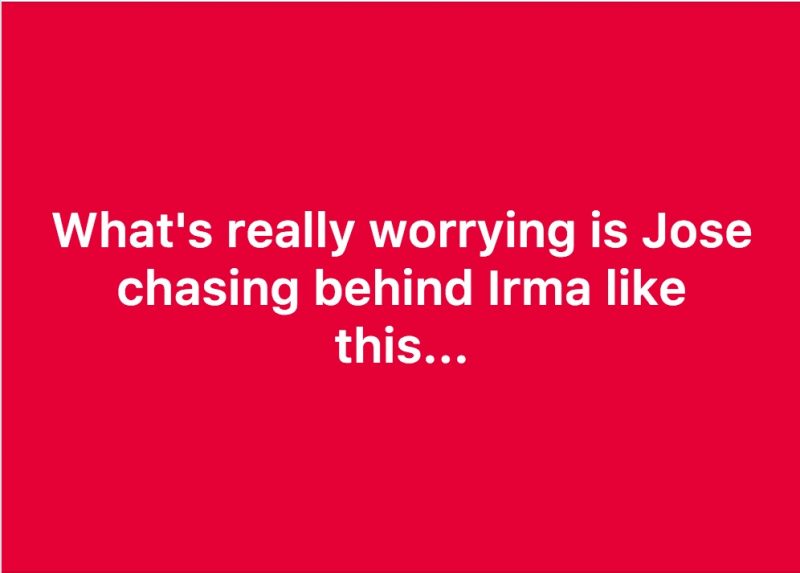 A Facebook status update by Annie Paul, in which she says, “What's really worrying is that Jose is chasing behind Irma like this…”

Barbuda recorded one hurricane-related fatality on the island, and it is astounding that there weren't more. Videos of the aftermath quickly began circulating on instant messaging platforms like WhatsApp and social media channels. There were accounts likening the experience to a horror movie: people running from house to house as roofs were blown off, 40-ft. containers “flying through the air”, and “cars flying over our heads”.

‘Let's look out for our own, for we are ONE CARIBBEAN’

As Irma continued to wreak havoc, more and more islands were added to the list: 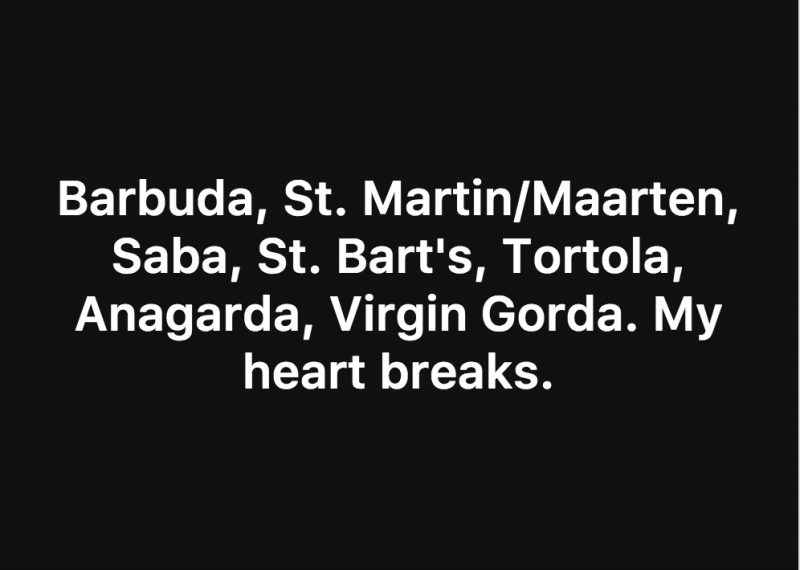 We forget the Turks & Caicos Islands. In Irma's path, N of Haiti. High point abt 140 ft above sea level. Full of Haitian/J'can/DR workers

Citizen media videos coming out of Tortola were also distressing.

Netizens soon started asking for suggestions as to the best way to help, and contact information for any trustworthy organisations that would be coordinating relief efforts. Even those who had been through the deluge themselves, but fared better than places like Barbuda and St. Maarten, were concerned about the welfare of their neighbours. From St. Kitts, Dele Adams said:

Hi guys! Thanks for checking in. We in St. Kitts 🇰🇳 are fine, but others in our neighbor islands, namely: Barbuda 🇦🇬, St. Martin/St. Maarten 🇸🇽, St. Barths 🇫🇷, Anguilla 🇦🇮 and Tortola 🇻🇬were BADLY hit.
If anyone was thinking of donating, be it clothes, food or money, can you please send it their way first? Barbuda in particular, as 95% of the island is uninhabitable per BBC reports.
You are the best, most compassionate people I have ever met and I know you will step up to the plate. One Love!

Facebook user Raymond Edwards posted an update from journalist Julian Rogers, who was on the ground in the Leewards:

This hurricane is so huge that it is already affecting Dominica, Guadeloupe and its islands and will have an impact all down the chain of the Northern Caribbean – so that will include St Kitts and Nevis, St. Maarten/St. Martin and Anguilla on to the BVI and US Virgin Islands. We all have family and friends on each of those island countries. Don't get hooked on the US reports that never list these countries – their interests is American. So look for them to be talking about Puerto Rico…even disregarding the USVIs…they have no concept or understand or appreciate the geography. Let's look out for our own, for we are ONE CARIBBEAN.

It has been very striking over the past 24 hours to experience just how disconnected we are from one another in the Caribbean, but also to experience the power of the internet to connect us in ways that traditional media is failing to. For example, to the credit of the Antigua Broadcast Service they streamed live on FB which made is possible for a very large audience to see the devastation in Barbuda, and most critically, to hear the people of Barbuda share their experiences first hand. Last night, for another example, I tuned in to radio in Antigua via internet streaming and listened with great interest to all the callers. It made me feel my Caribbeanness very strongly. We need to see and hear and interact with each other much much more. That's the message Irma has brought to me […]

On that point of “Caribbeanness”, another thing that the people of the region do very well is pray. Trinidadian actor Michael Cherrie was one of many on various social networks who were “sending prayers and protection vibes to those in the path of Irma and Jose” — but for every person who sent out positive energy, there were those who reverted to the concept of heavenly comeuppance to explain Irma's severity — and the path she had chosen to take: 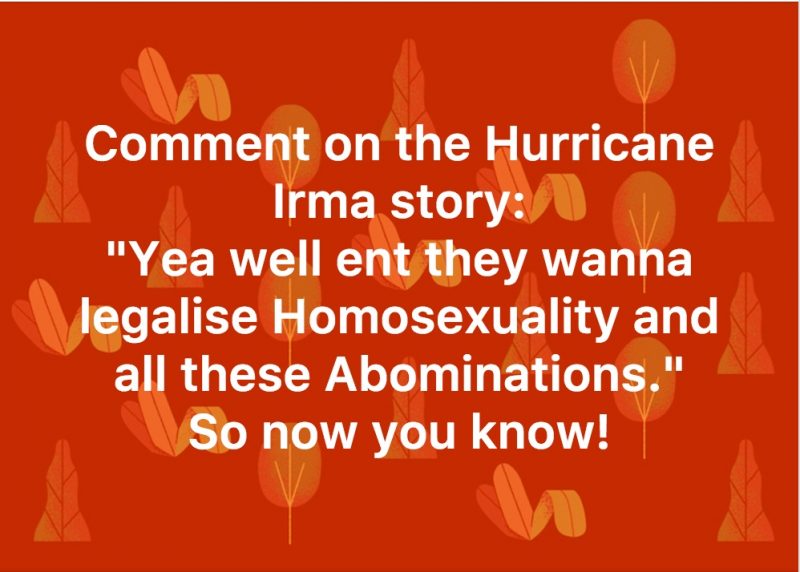 Facebook user Patricia Worrell posted a comment she had seen online with regard to why Hurricane Irma was happening. It reads, “Comment on the Hurricane Irma story:
“Yea well ent they wanna legalise Homosexuality and all these Abominations.”
Then, tongue firmly in cheek, she adds, “So now you know!”

But others laid the blame for the severity of the storm at the feet of climate change. Activist Tillah Willah, posting a link to Lord Nelson's calypso “Foreigner”, mused on Facebook:

When Irma pass and finish make she manimah, when all the other storms pass through us like senna and salts at the end of August. Who will be so shameful to dare call our neighbours ‘foreigner’, forgetting in their arrogance the stories that once the indigenous moved freely from up the islands to down the islands to avoid Huaracan's terrible dance. No passport, just a pirogue and prayers. What will nation mean when America's coasts and small islands start to disappear and we have the first generation of climate refugees? We sow this environmental damage daily and for that we will reap whirlwinds for which no categories have been dreamed of yet. Who will be the foreigner when nature comes back for what we have so violently taken?

We entered into a new era. Anyone who has the audacity to doubt climate change really should be given the walking papers if they have a job in this area and who are not taking it seriously.
It's especially so because hurricane Jose coming about 5 to 6 days after is not going to give a few islands a chance to even think.

How terrifying to be sitting there waiting for this beast to come. Fearing for all our people in its path and its brother following. The monsters we have created.

Some of the most highly recommended hurricane relief organisations on social media threads include Habitat for Humanity, Is There Not A Cause? (ITNAC), and Save Our Sister (a group specifically set up for relief to Barbuda). There is also TickeTing, an app developed in Antigua, which is collecting donations to be donated to both the National Office of Disaster Services and the Antigua and Barbuda Red Cross. Religious organisations region-wide have joined in hosting collection drives to send food, clothing and other supplies for hurricane victims.