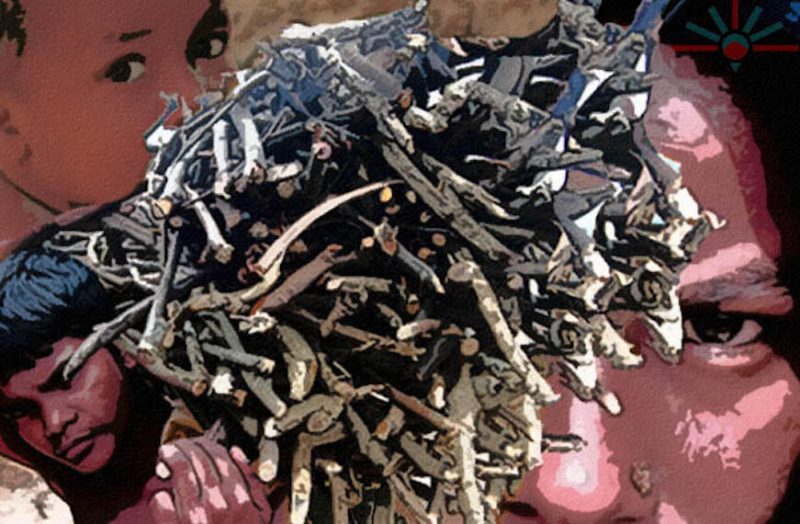 Over the past few weeks, Russia's North Caucasus republics and the ex-Soviet states of Central Asia have seen an explosion of interest in the plight of Myanmar's besieged Rohingya minority, who share the Islamic faith dominant across the region.

According to the United Nations over 270,000 Rohingya Muslims have fled Myanmar's Rakhine state for Bangladesh amid a campaign of government-backed violence sparked in part by a standoff with militants during the last two weeks. Al Jazeera and aid agencies estimate almost a million members of the stateless minority have fled Myanmar since the late 1970s.

Several large, seemingly Whatsapp-fuelled rallies against the violence have already taken place in Moscow and Grozny, the capital of Chechnya. The rallies went ahead in spite of Russia's seeming official position on Myanmar, that saw it block a UN Security Council resolution regarding state-sponsored violence against the Rohingya earlier this year. In ex-Soviet Central Asia, while no-one took to the streets, a football match featuring Myanmar's international team was cancelled over security fears and Facebook posts, petitions and even poetry in support of the Rohingya flooded timelines.

A strongman takes a stand

The Moscow rallies that took place on September 3 and 4 were unsanctioned in a country where the right to protest is strictly controlled. The first Moscow rally didn't result in any arrests, despite heavy police presence, but 17 people were briefly detained on Monday at a follow-up rally. According to reports in the Russian media, WhatsApp groups served as a the main hub for organizing the protests.

Chechnya’s controversial leader Ramzan Kadyrov has played a leading role in organising the response to a sudden surge of violence and state-driven persecution in the Southeast Asian country. Kadyrov, famed for gay-bashing and fiery tirades in support of Russian President Vladimir Putin, has used social media to strike out against world leaders for their inaction. On September 4 he staged a rally attended by tens of thousands — the official claim was a million people, or almost 80 percent of the republic's total population — in the Chechen capital Grozny. On Thursday, three days after the Grozny rally, Kadyrov made another statement on Instagram, saying that no further protests will be necessary as enough awareness had been raised. 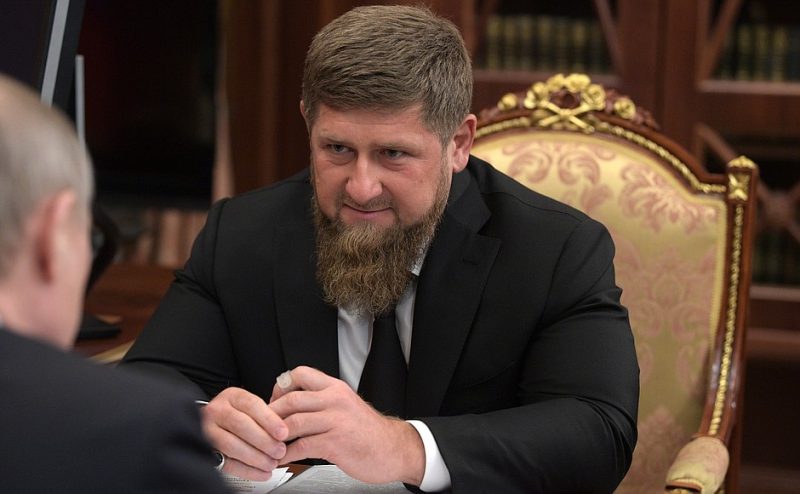 By that point Kadyrov had already hinted that Moscow should step up pressure on Myanmar, while claiming he would launch a nuclear strike against the Rohingya's oppressors if he was able to.

He later said the comments — which analysts called alarming for his superiors in the Kremlin — had been taken out of context by his enemies. Russia's foreign ministry warned against putting pressure on Myanmar on June 8.

Given Kadyrov's uncompromising stance on Myanmar, it is no surprise that social media users from Chechnya have been among the loudest voices backing the Rohingya on Russian social media. Users from neighbouring Dagestan and Ingushetia have also been vocal even as citizens in Russia's other majority Muslim federal republics, Tatarstan and Bashkortostan, largely ignored the issue.

This North Caucasus bias was reflected in Yandex, Russia’s largest national search engine, reporting a sharp increase in searches about Myanmar (Мьянма in Cyrillic) coming from the region.

The word “Myanmar” is most searched on #Russia|n search engine @Yandex by users in #Chechnya & #Dagestan:https://t.co/iIPH3nkHo6 pic.twitter.com/EHReEz9Ajw

Support for the Rohingya cause across the region has a pop-up feel. Many long-standing Islamic-themed Vkontakte pages have transformed themselves into 24/7 pro-Rohingya advocacy channels overnight. Most are explicitly run by and aimed at residents of Chechnya. 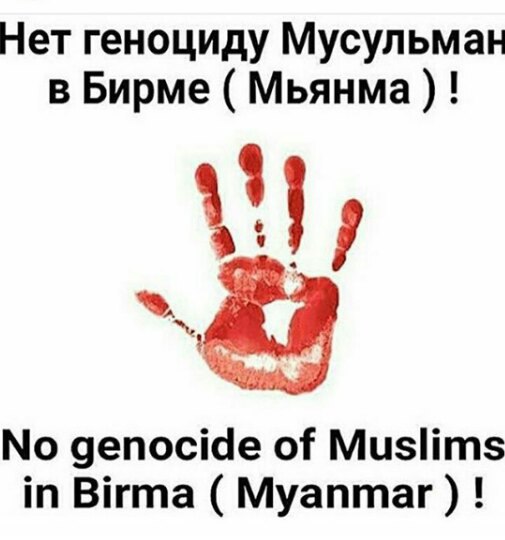 One such online community, [V]Chechnye ([In]Chechnya), has posted at least 43 messages relating to the Rohingya crisis since September 1. Messages include video appeals informing Muslims of the atrocities against the Rohingya, calls to sign a Change.org petition, and allegations that anti-Muslim violence in traditionally Buddhist regions of Russia such as Kalmykia goes unpunished (incidents reported in the Russian media, such as a prayer room in Elista, Kalmykia's capital, being torched by unidentified assailants, and a pig's head thrown into a village mosque, were mentioned).

Some have gone as far as recruiting volunteers online to join a “holy jihad” to save their brethren in Myanmar.

One page, Overheard in Chechnya, published a post bringing attention to the September 4 rally, adding bullet-pointed instructions on how to keep the online campaign alive.

They are experiencing what we cannot even imagine!
#Rohingyawearewithyou
ALLAHU AKBAR
Tomorrow (04.09), a rally near Grozny’s central mosque!!
Don’t be indifferent!!!!
Max repost!!

Let’s all hold a rally on social media!!! All! All of you! Everyone who opposes the genocide in Myanmar!!! Your faith, denomination or nationality don’t matter!!!
Replace your Instagram, What’s App [sic], Vkontakte etc profile picture with the following image (share both the text and the image)
DON’T LIKE IMAGES AND VIDEOS NOT RELATED TO THE CAMPAIGN! So that the genocide stays on top of most discussed posts!!! So that everyone knows!!!
DISSEMINATE INFORMATION ABOUT THE RALLY AMONG EVERYONE YOU KNOW ON SOCIAL MEDIA! Let the whole world know that we won’t just let the story go!!! We are prepared to go any length to save innocent people!!!
USE THE HASHTAG #ROHINGYAWEAREWITHYOU

Even My Private Aul, an anonymous online community for gay persons from Northern Caucasus — arguably one of the most marginalized and persecuted groups in Russia — posted an appeal to sign a petition addressed to Russia’s UN envoy.

The petition, which at the time of writing has over 160 thousand signatures, urges the the Russian ambassador Vassily Nebenzya to support a UN Security Council resolution on violence in Myanmar, rather than vetoing it with China, as happened earlier this year.

Political football and poems of woe

Over on the other side of the Caspian Sea in the Central Asian states once part of the Soviet Union there has also been a strong reaction to violence in Myanmar. This was most apparent in Kyrgyzstan, where the government cancelled a scheduled Asia Cup football qualifying fixture with Myanmar, amid concerns over a potential terror threat and fan clashes with Burmese players.

The #ACQ2019 Group A match between ?? and ?? is postponed due to security concerns.

Many Kyrgyz social media users thought this was an overreaction. But officials were clearly nervous in the build-up to the game, as social media users called variously for a boycott of the match, a peaceful protest outside the stadium and a minute's silence in respect of the Rohingya victims prior to kick off.

The football federation, whose Facebook page was overwhelmed by criticisms of Myanmar and support for the Rohingya, posted a plea for order before the country's Prime Minister eventually moved to cancel the game:

We position ourselves as a friendly and hospitable nation!!! Like all we condemn and mourn what is happening to Muslims in Myanmar! Nevertheless…let's show on September 5 that we don't give in to provocations. Let's support our guys in a friendly fashion!

Not all Kyrgyz have been impressed by online pro-Rohingya messaging. One post in the group We are for a Democratic and Secular Kyrgyzstan (In Russian Мы за СВЕТСКИЙ, ДЕМОКРАТИЧЕСКИЙ КЫРГЫЗСТАН!) hinted at frustrations over pan-Islamic sympathies and posts written “stupidly for likes and comments”. 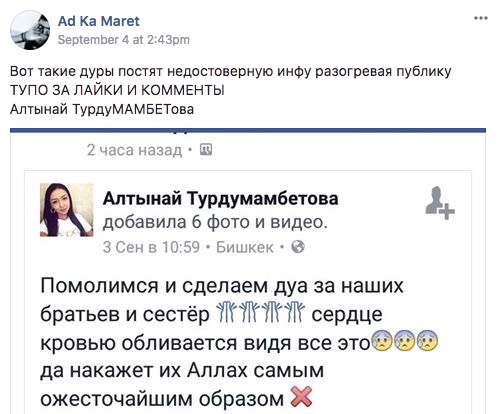 In this post a Facebook user criticizes another user for writing posts “stupidly for likes and comments”. The original post calls on Muslims to pray for the Rohingya and for God to punish their persecutors “in the harshest possible way.”

The violence in Myanmar also inspired a number of lyrical tributes. Here citizens of Tajikistan came into their own. One website focused on the country counted at least five Tajik poems on social media, themed on the unfolding tragedy in Myanmar.

I’ll go to Myanmar!
To tell Burma not to take hopes from
My poor pregnant sister,
Not to burn my nation,
Not to take my soul,

I’ll go right now!
To take Burma to the house of justice,
And to the home of forgiveness

Although the Grozny and Moscow protests may have played a role in drawing Central Asians towards the Rohingya cause, it is worth considering that the opportunity for solidarity presented to them by the conflict in Myanmar is also an opportunity for self defence. 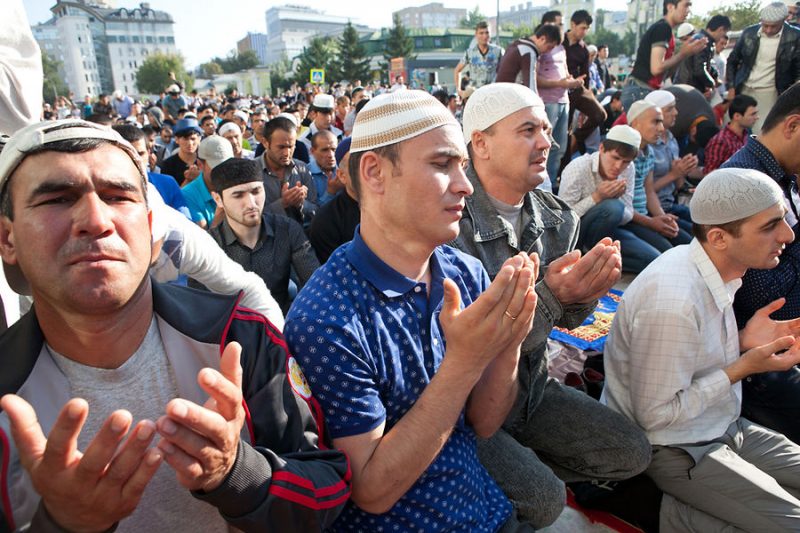 Tajik migrants gather on a Moscow street for Eid al-Fitr prayers. Praying on the street is banned in Tajikistan. Photo by David Trilling for Eurasianet.org. Used with permission.

Last week Tajikistan moved to ban the Islamic hijab covering from schools completely while mobile service providers mobbed citizens with SMS messages stressing the need to wear non-religious “national” clothes. Neighbours Uzbekistan and Turkmenistan are routinely recognised by the US state department as “countries of particular concern” in regards to religious freedom. Kazakhstan is seemingly moving in a similar direction.

For citizens in these countries then, the plight of a geographically distant community whose religion they share has offered a chance to amplify concerns about injustices committed against Muslims the world over, without too much fear at the consequences of speaking out.

For Ramzan Kadyrov over in Chechnya, the Rohingya tragedy perhaps represents something even greater: a bid for power and influence across the Muslim world.