Simon Ateba Is Not Ahmed Abba, but He Too Has Experienced Persecution as a Journalist in Cameroon 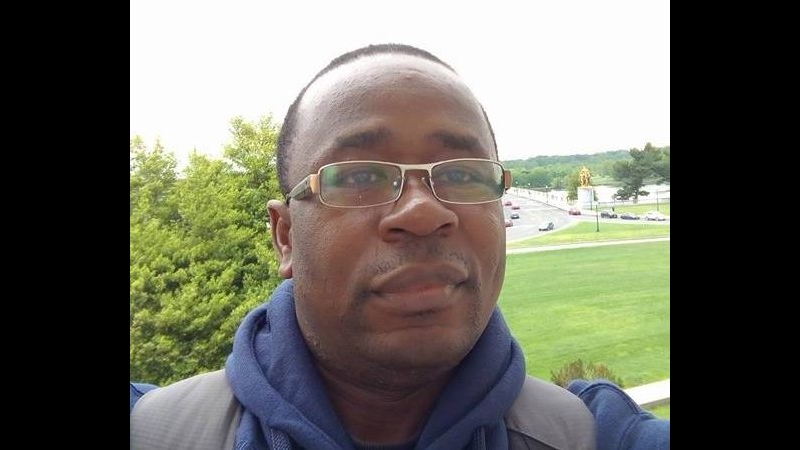 Simon Ateba. Published with his permission

Simon Ateba is not Ahmed Abba.

More than once, however, media outlets have mistakenly identified a photo of Ateba as being Abba, a Cameroonian journalist for Radio France International convicted of terrorism-related charges in April 2017 for reporting on the Boko Haram militant group.

Unfortunately, Global Voices was the latest news organization to make that mistake, and Ateba quickly alerted us to that fact. We have since corrected the original article, apologized, and spoken to Ateba about his own experience.

It turns out that Ateba is also a journalist who has faced government pressure on account of his reporting on Boko Haram. Born in Cameroon and trained in Nigeria, he worked for nine years for The News Magazine, one of Nigeria's most iconic political publications. Now he lives in the US capital of Washington, D.C., and is the publisher of Simon Ateba News Africa, which focuses on African events including the political situation in Nigeria, the presidential election imbroglio in Kenya, and Boko Haram massacres in Cameroon.

In 2015, after receiving a grant from the Ford Foundation via the International Center for Investigative Reporting in Nigeria, Ateba traveled to Cameroon and Chad to report on Nigerian refugees who had fled Boko Haram atrocities in Nigeria. He says he alerted all the relevant authorities beforehand that he would be visiting the area to do journalism.

However, he was arrested in September of that year at the Minawao Refugee Camp in Cameroon's far north and accused of being a Boko Haram spy.

While in the custody of the Cameroon government, Ateba says he was deprived of food and was kept in a cell without any basic amenities. He was eventually rescued from his ordeal with the help of Amnesty International and other human rights organizations.

His case highlights the precarious state of human rights and press freedom in Cameroon under the decades-long rule of President Paul Biya. The Cameroonian authorities haven't only targeted individual journalists, but entire populations. For example, earlier this year, following protests over the disparities between Francophone and Anglophone areas, the government shut down Internet access for the country’s English-speaking regions for three months.

“There’s press freedom of Cameroon for those who praise the government or who do not do serious investigative journalism,” Ateba says. “You can insult the President, he may not do anything. But once you begin to meander into serious things such as human rights abuses, financial transactions, and so on, then you are seriously in trouble.”

“And it's not just the President,” he adds, “the top officers, the cops, everyone is a Lord. Cameroon is more like a police state, a country where there are many laws that are not obeyed or respected by the authorities.”

That means practising journalism online is especially risky. Ateba doesn't have any illusions about what would happen to him if he were still in Cameroon: “I would be arrested, jailed or killed. Luckily, I have no intention of going there now.”

‘President Paul Biya does not care about Francophones or Anglophones’

The fight against the militant group Boko Haram, which has been wreaking havoc in the country's far north since 2014, has given Cameroonian authorities even more of a pretext to punish journalists who step out of line, says Ateba. Under the new anti-terrorism law—the law that was used to convict Ahmed Abba—”officials can just frame anyone. . . .and label the person a terrorist. There is no freedom.”

But the truth, Ateba argues, is that the narrative in Cameroon has long been skewed. Instead of focusing on the actions of President Biya and his associates “looting everything and destroying the institutions of that country,” problems are often framed as the Anglophone minority versus the Francophone majority.

“President Paul Biya does not care about Francophones or Anglophones,” Ateba says. “Cameroonians are being neglected and being scammed by Biya. If you protest, you oppose him or threaten his power, he comes after you, whether you are a Supreme Court judge or protest leader, whether you are a Francophone or an Anglophone, same treatment.”

What needs to happen, Ateba believes, is more cooperation across these divides. “These groups need to unite and remove the gangster and his accomplices and sit down to form a federal country with 10 regions. Even though you hear only about Anglophones, Cameroon has ten regions and these regions have their own peculiarities, languages, and so on.”

‘Although I know he is innocent, I am not him’

Against such a dangerous backdrop, Ateba says the error of presenting his photo as Ahmed Abba's in news reporting has been “damaging.”

“Although I know he is innocent, I am not him. I am Simon Ateba, I am not in prison and I was never convicted for terrorism,” he says. “These stories were shared by thousands of people, archived by search engines and downloaded by terrorism experts,” he points out, “and even when the picture is eventually taken down, thousands of people do not go back to read the story again and news agencies do not crawl it again.”

Global Voices was the fourth outlet to make this error. Ateba points to several examples of how the things written about him online have affected his life. Two months ago, for instance, he was banned from a church near to Washington D.C. in the US state of Maryland. “The reason they banned me, they said,” says Ateba, “was because I had very negative things written about me on the Internet. They mentioned Boko Haram and spying. I did an article on that and moved to another church.”

People who Googled his name, Ateba continues “would see my pictures on spy stories…. In the United States, once you are convicted as a spy, once you’re described as a spy, you’re on the watch list of the government. I will not go into detail on how this has affected my relationship with the authorities here, but it has not been helpful.”

Once again, Global Voices sincerely apologizes for our mistake, and we hope this article can help to correct the record regarding Simon Ateba.