Scenes From the Bangladesh-Myanmar Border, Where Rohingya Refugees Are Seeking Refuge From Violence 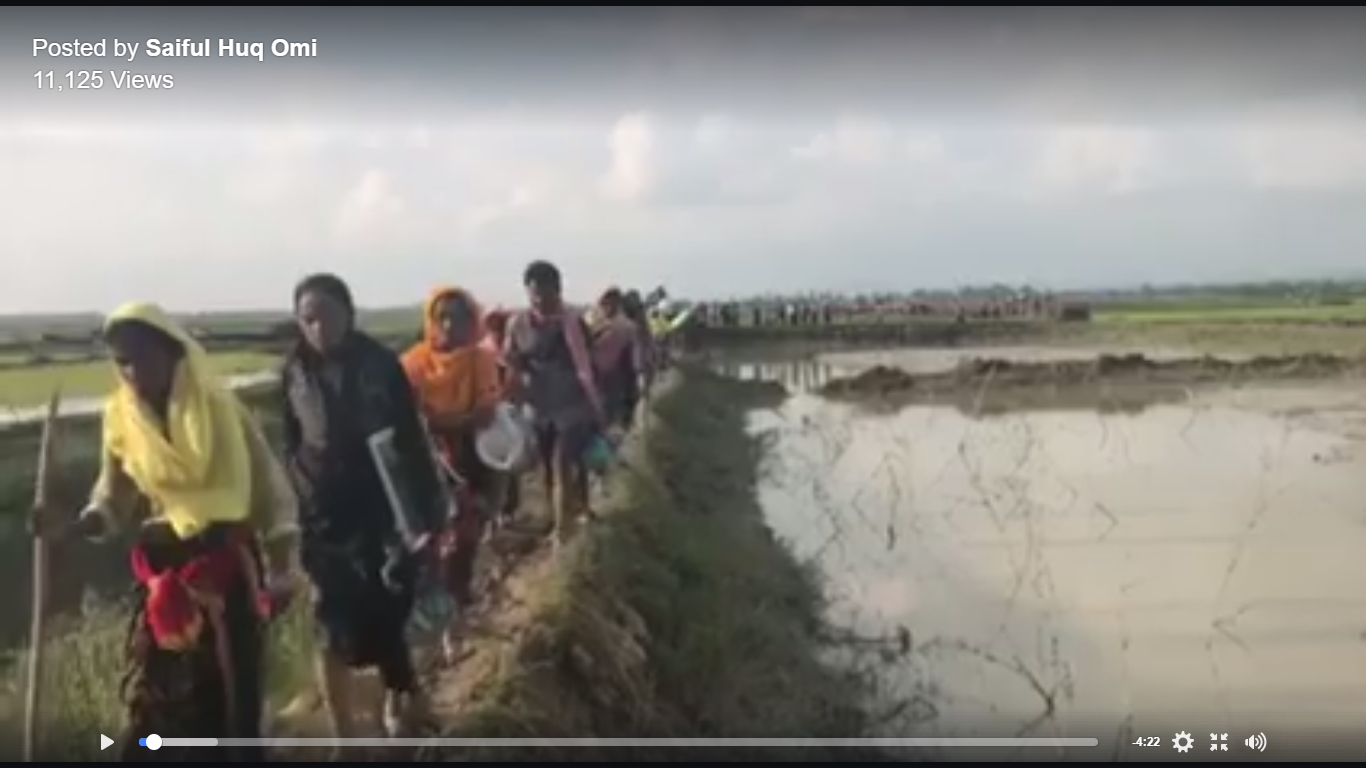 Screenshot of a Facebook video by Saiful Huq Omi.

As Myanmar has brutally cracked down on Rohingya Muslims, forcing many to flee to neighboring Bangladesh, local Bangladeshi activists, journalists and aid workers have been there to document their difficult trek.

The Rohingya are an ethnic group who are concentrated in Rakhine state, in Buddhist-majority Myanmar. They are denied citizenship and other basic rights by the Myanmar government, who consider them to be illegal immigrants from Bangladesh, even though the Rohingyas have roots in Myanmar that go back centuries.

According to UN sources, more than 123,000 Rohingyas entered Bangladesh in the past week alone. Bangladesh already hosts 400,000 Rohingyas in various settlements, who have arrived over past few decades. While the Bangladesh government has resisted accepting more refugees from Myanmar during this current crisis, the Bangladeshi people are largely sympathetic to the plight of the Rohingyas.

Shafiur Rahman is one of the people who have been sharing information from his Twitter and Instagram accounts about the stream of Rohingya people arriving at the border. He is a Bangladeshi-British filmmaker who is working on a documentary about Rohingya women refugees.

On August 26, 2017, he reported that the Bangladeshi border guards were not allowing the refugees to cross:

On August 29, 2017, however, Bangladesh Prime Minister Sheikh Hasina ordered security forces to treat the refugees humanely as they are fleeing for life. Subsequently, border guards began to allow many refugees through.

Rahman also reported that the Myanmar army was targeting innocent civilians as they flee. His information coincides with other sources who say the same. Myanmar helicopters pursuing alleged Rohingya insurgents have violated Bangladesh’s airspace near Ukhia in Cox’s Bazar multiple times:

This young #rohingya woman was shot today, along with her husband, a few metres from safety by #burmese military. Their child survived. pic.twitter.com/uDNTOFOzcT

#Rohingya Women and children from Min Gri where there are reports of mass killings using guns, knives, launchers and house burnings. pic.twitter.com/DDEJP6bwEH

The journey to the relative safety of Bangladesh is long and treacherous, Rahman reported:

Welcome to Bangladesh! Bangladeshi gives a helping hand to this #rohingya family. They walked for 5 days. They fa… https://t.co/0pfzK5R9cI pic.twitter.com/OCrJsnASCQ

Welcome to Bangladesh! Bangladeshi volunteers give water and biscuits to #Rohingya #refugees as they arrive. #RefugeesWelcome pic.twitter.com/ShyBk3LdBg

And once on the Bangladesh side, the Rohingya refugees face exploitation by unsavory people as there is yet to be formal shelters and aids available for them:

Why are #Rohingya refugees having to buy their plastic sheeting? Why is there a flourishing market for these? Where are the agencies? pic.twitter.com/AroNVz8KV1

Renowned photojournalist Saiful Huq Omi was also at the border posting images and videos to his Facebook page:

In a recent video report he urged for people to take a stand against Rohingya persecution:

Thousands and thousands and thousands of people are coming. Look at the faces. Look how young they are. And I hope those who think they're nothing but terrorists, I hope you see this child. You see this old man and ask yourself how on earth you can be such a shame for humanity. This is what is happening on the border. Young child, infants, old man, old woman, and young men are fleeing their motherland and leaving behind the dead bodies of their beloved members of the family. Hardly managing any time to get their things packed […]

They will take this route all the way down the hills and all the way at least few more hours of walk[ing] before they can rest and maybe one kind villager will show up and offer them some food and some water.

Resources are stretched, though the good news is that the Bangladesh government has decided to establish a new camp for the latest influx of refugees. It will take some time to build, however.

It remains to be seen what will happen in the coming days for the displaced Rohingyas whether in their home country Myanmar or in refugee settlements elsewhere.