The anti-migrant campaign has led to violence against some journalists 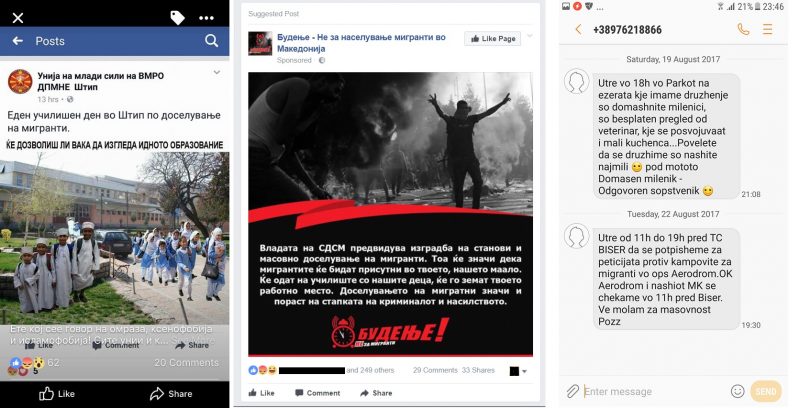 Ahead of the local elections that will take place in October, Macedonia's former ruling party is building upon its legacy of fear mongering by stepping up the propaganda about the supposed threat posed by refugees from the Middle East.

The Internal Macedonian Revolutionary Organization – Democratic Party for Macedonian National Unity (VMRO-DPMNE) was Macedonia's ruling party in the past decade. On May 31, 2017, a new coalition government led by Social Democratic Union of Macedonia (SDSM) was established.

But the former ruling party has retained control of most municipal governments and even media outlets. Through veiled statements by its leaders, and also through proxy groups on social media, it continues the propaganda based on fear, fomenting ethnic hatred between the (mostly Christian) ethnic Macedonians and other ethnic communities within Macedonia, in particular, the (mostly Muslim) ethnic Albanians. When the party failed to form a coalition with ethnic Albanian parties, it attempted to blame the latter, as well as the West and civil society for conspiracy to dismember the country by dividing it into cantons (like Bosnia) or federalizing it into territories that can later secede and join Albania.

Since the division into cantons and federalization of the country didn't occur, the migrants had to come to scare the people.

The latest iteration of this campaign incites fear of migrants which is believed to be intended to mobilize support for the dwindling political base of VMRO-DPMNE.

When the new government announced public consultations for the purpose of updating the National Strategy for Integration of Refugees and Foreigners in Republic of Macedonia 2017-2027, VMRO-DPMNE quickly denounced it as an unnecessary program for the building of settlements for refugees. 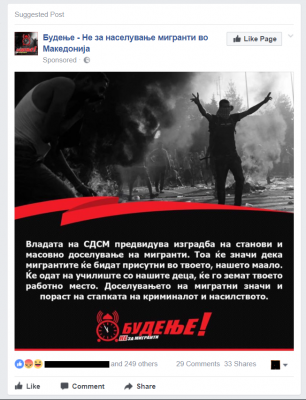 A paid Facebook advertisement by the proxy group “Budenje! Ne za migranti” (“Awakening! No to migrants”) demonizing the refugees.

VMRO-DPMNE is also accused of using proxy groups in its anti-migrant campaign to avoid legal and political backlash. For example, the group “Awakening” has been posting messages on Facebook that criticize the government's settlement program by demonizing refugees:

“SDSM government plans to build apartments and massive settlement of migrants. That means the migrants will be present in our neighborhood. They will go to school with our children, they will take your workplace. Settling of migrants means an increase of crime rate and violence, also.
Awakening! No to migrants”

What “Awakening” didn't mention is that the government's strategy is almost similar to what VMRO-DPMNE had been implementing since 2008 when it was the country's ruling party. During the 2016 election campaign, VMRO-DPMNE even cited the building of 20 apartments for refugees who had been granted asylum as part of its accomplishments.

In response, the new government maintained that Macedonia will remain a transit country for refugees, and not a destination like Germany. In recent years, only 15 asylum seekers had asked to remain in Macedonia. The country's Minister of Foreign Affairs Nikola Dimitrov tweeted:

Since June 1, I had hundreds of meetings. Not one, NOT ONE person I've talked to had asked that Macedonia to be a destination country for settling refugees. #fact 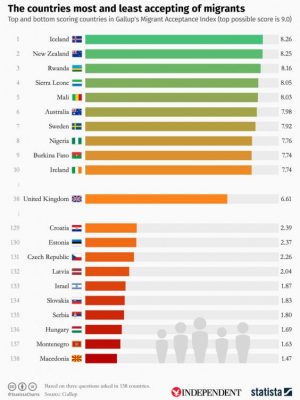 World's most and least welcoming countries for migrants – a chart made by The Independent based on the results of a Gallup poll. CC BY-ND. Click to enlarge.

The anti-migrant campaign espoused by VMRO-DPMNE could be one of the factors for the low opinion about accepting migrants in Macedonia. A recent Gallup poll showed that Macedonia is the least accepting country for migrants in the world.

Another example of how VMRO-DPMNE has used the refugee crisis for propaganda was its hiring of the United States-based New Partners Consulting Inc. in 2015 to publicize “Macedonia's, and in particular [former] Prime Minister Gruevski's, role in the epicenter of the refugee crisis and the need for increased cooperation and resources from other NGOs and international partners.”

This was disclosed on the website of the Foreign Agents Registration Act which lists American companies engaged in lobbying for foreign powers.

One of the results of this deal, which cost 54,000 US dollars, was the publication on Newsweek of an opinion piece entitled “We Must Work Together to Help The Migrants,” officially penned by party leader Gruevski on December 10, 2015.

Providing a typical example of doublethink, many VMRO-DPMNE supporters seem unfazed by the contradictory positions of the party: advocating help for refugees on one hand (abroad), to reversing the stance on the National Strategy on Integration, to demonizing migrants, albeit through ‘unofficial’ channels aimed at the home audience. 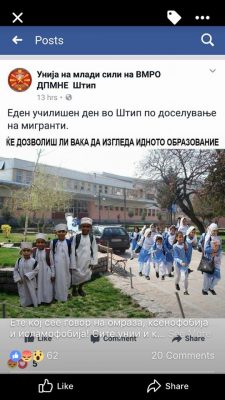 Screenshot of a Facebook post by Union of Youth Forces of VMRO-DPMNE Štip. Its text reads: “A school day in Štip after migrants settle. WILL YOU ALLOW FUTURE EDUCATION TO LOOK LIKE THIS.” Additional text over the screenshot: “Here's who is spreading hate speech, xenophobia and Islamophobia.” Click to enlarge.

The recent campaign to whip up anti-migrant sentiment has been criticized by some netizens as “fascist”.

For instance, the youth branch of VMRO-DPMNE from Štip (on the right) remixed photos of a local school and school children from some Middle Eastern country wearing robes and headscarves, and urging readers to prevent an Islamic invasion or mass conversion to Islam in schools.

Furthermore, groups such as “Awakening” and “You must come outside, too!” had been collecting signatures for anti-migrant petitions in various municipalities during the last few weeks, in particular, in municipalities where VMRO-DPMNE has a majority in the town council. Human rights organization Macedonian Helsinki Committee has publicly warned that these groups are openly inflaming hate speech and xenophobia.

Investigative journalists also reported that VMRO-DPMNE has been ordering its loyalists, including civil servants and public school teachers to sign these petitions. When journalists tried to call the owner of the phone number used to send text messages in the name of the local party committee inviting members to come and sign the petition, the person denied having ties to the party.

In Skopje, when the Nova TV journalist Saška Cvetkovska asked “Awakening” activists collecting signatures who they are, and what they intend to do with the sensitive personal data collected from citizens, which include their Unique Master Citizen Numbers (similar to the US social security number), she received no clear reply. The person collecting the data merely said that she's a member of VMRO-DPMNE. Afterwards, a man who was later identified as an employee of the Municipality of Aerodrom attacked the journalist and her cameraman in an attempt to stop them from continuing their report.

Unlike in the past, when such cases of media attacks enjoyed impunity, the authorities pressed charges against the attacker of Nova TV journalists a week after the assault.

Another news item by Telma TV on August 24 showed that the logistics for taking the signatures, including the chairs, tables and the collected data are stored in the local political party offices, indicating direct connection between the VMRO-DPMNE and the supposedly “grassroots” initiative.

Here's to all who don't believe that VMRO-DPMNE is behind the collecting of signatures against the migrants. Now zip it!

Last week, these anti-migrant petitions had been used as basis by city councils in Štip, Kavadarci, Karpoš and other municipalities to initiate local referendums against the settling of refugees within their jurisdictions. Scheduled to take place around the local elections, such referendums can potentially disrupt the local political situation, aside from incurring significant additional cost for taxpayers.

In case the referendums are conducted simultaneously with the elections, they could potentially combine the issue of hatred against the (Muslim) migrants with the voting for local councils, presumably swaying some of the (Christian) voters who would otherwise not directly support nationalist candidates.

According to the Macedonian Criminal Code, some forms of hate speech are considered a felony, but their perpetrators had enjoyed impunity under the former government.

Activists are worried that anti-migrant propaganda might continue to intensify with the approaching campaign period for the local elections.