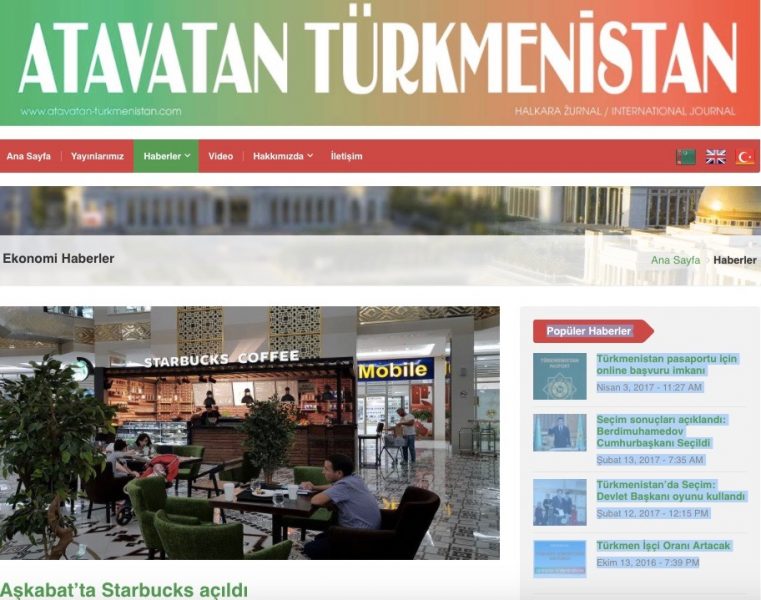 Atvatan Turkmenistan reports on the Starbucks that isn't. Screenshot of website.

In a plush shopping center in Turkmenistan's capital, Ashgabat, a brand new cafe bearing the name “Starbucks” has sent tongues wagging with its authentic-seeming decor and 15-manat Frappuccinos .

Predictably, however, it isn’t the real deal.

Social media was briefly stirred by the revelation that a Starbucks had sprung up in a mall that was opened by autocrat ruler Gurbanguly Berdymukhamedov with great fanfare last year.

A Turkmenistan-focused news website provided a photo of the cafe — parked in a leafy corner of the the white-marble-dominated Bagtyyarlik mall — unambigiously bearing the Seattle-based company's logos and look.

Armenia’s ambassador to Turkmenistan also took a snap, hailing it as the advent of globalization in the country viewed as one of the world’s most isolated.

Alas, Starbucks told EurasiaNet.org that it had nothing to do with the global retail chain.

“I can confirm that we do not have a store in Turkmenistan,” Starbucks corporate communications director Jaime Riley wrote in emailed comments.

The store also fails to appear on Starbucks’ store locator app, which tracks 24,000 stores in 70 different countries. (The company does have a strong presence in neighboring Kazakhstan).

At the fake “Starbucks” cafe, a “grande” cappuccino costs 12.50 manats, more then twice its average cost in other trendy Ashgabat cafes.

While that equals more than $3.40 at the manat’s official rate with the dollar, it is worth noting that the dollar is fetching more than 6 manats on the black market.

The country’s current economic crisis, brought on by sagging global prices for energy commodities, has led to a sharp spike in the price of imported goods. So depending on the type of coffee and other products the would-be-Starbucks is bringing in, prices at the till might just reflect the weakened purchasing power of the local currency.

International trademarks are often abused in ex-Soviet Central Asia. In Kyrgyzstan’s capital, Bishkek, a restaurant using the TGI Friday's brand name closed in 2014 after receiving a threatening letter from the US restaurant chain. The same city boasts a Whatsapp cafe and a Burger Kiиg, which deserves credit for its innovative use of Cyrillic to obfuscate a clear violation of copyright.

Turkmenistan is a signatory to the Berne convention , which protects copyright to some degree. But unlike Kyrgyzstan, it is not a member of the World Trade Organization, which treats intellectual property very seriously.

What is most interesting in the Turkmen case is the ownership of the cafe in question.

Given that Berdymukhamedov was at the opening ceremony for the Bagtyyarlik mall, it is clearly an site of some economic prominence. Moreover, few businessmen can make hay in the closed-off country without patronage from the state, prompting the question of who might be acting as political cover for the cafe.

The would-be-Starbucks opened ahead of the 2017 Asian Martial Arts and Indoor Games, which Turkmenistan hosts later this month. Unfortunately, the ersatz Starbucks does not appear to be especially close to the ersatz Olympic Village built for the games, so coffee-loving sports fans will have some way to schlepp for an ersatz Seattle coffee bar experience.