Russia's Social Inequality Is in the Spotlight After an Ex-Senator Gets High, Shoots Up Hotel Room 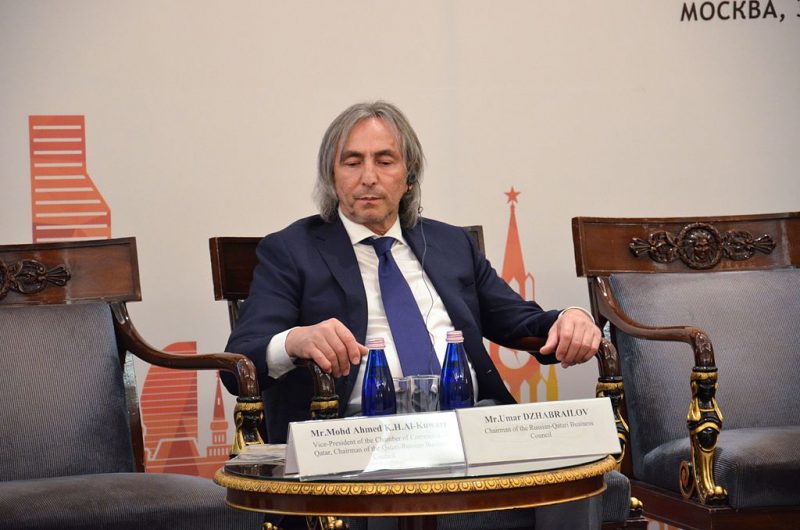 Umar Jabrailov, 59, is an ex-senator for Chechnya in Russia's Council of the Federation and chairman of Russian-Qatar Business Council Photo via Wikimedia Commons by Ivanna91. CC BY-SA 4.0

On August 30, Russian news websites reported that Umar Jabrailov, an ex-senator who represented his native republic of Chechnya in Russia’s Council of the Federation, was detained by the police after an incident in the upscale Four Seasons hotel in Moscow.

Jabrailov had discharged a firearm several times in his room while under the influence of one or several types of narcotics (his drug test came back positive, the police confirmed later). He publicly voiced his regret about “disturbing the peace,” but in the same statement, made in an interview with the REN TV channel, blamed the hotel for “this unfortunate disagreement.” As it turns out, he was extremely upset with the quality of service there, Jabrailov said.

His behavior caused much embarrassment to high-profile organizations that endorsed him. His party, the ruling United Russia, disavowed Jabrailov, temporarily halting his membership, and Russia’s Interior Ministry denied that his Yarygin handgun (MP-443 Grach) was a government-issued honorary weapon. Jabrailov is now facing charges of “malicious hooliganism” which potentially carries a prison term of up to five years.

Nevertheless, Jabrailov’s actions failed to produce the same kind of swift and aggressive response that Russian law enforcement usually reserves for opposition activists. People participating in protest events are often detained, arrested and even jailed for crimes like picketing a public prosecutor's office. Jabrailov, on the other hand, was released quickly and not placed under house arrest.

This latest incident comes amid an ongoing series of public scandals and gaffes involving senior Russian officials. In each case a high-profile politician, public officer, or in many cases, their children, has behaved in a way that is perceived as privileged, arrogant, and ignorant of the extent of people's grievances.

Russia's Prime Minister Dmitry Medvedev became a meme when he told a group of anxious pensioners “to hang on in there” after informing them that adjusting their pension for inflation was not possible because “there's just no money.” Corruption scandals involving senior officials rarely lead to investigations, and a wristwatch costing four times the annual salary causes little concern on state media.

This discrepancy attracted many sarcastic comments on Russian social media:

Last night an ex-senator Jabrailov shot up a hotel room. He was charged with HOOLIGANISM. However, you are an extremist for liking [a social media post]

Opposition leader Alexey Navalny commented on a court’s decision to place travel restrictions on one of his campaign managers:

Well, he isn't Jabrailov, who only peppered a ceiling with bullets while high on drugs. He is Navalny’s campaign HQ manager in Volgograd

Parallels were drawn between the cases of Jabrailov and Kirill Serebrennikov, an accomplished theater director, now in pre-trial detention and facing charges of embezzlement and potentially a 10-year prison term. Echo of Moscow, an opposition radio station, posted on its Facebook page a comparison chart titled “Jabrailov VS Serebrennikov”: 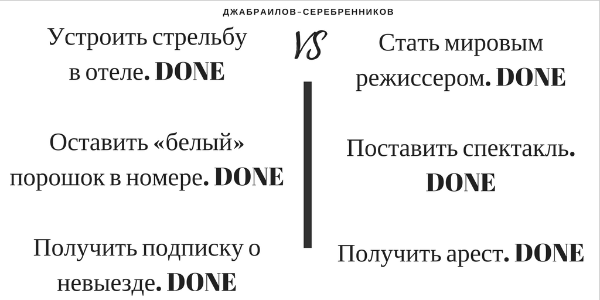 Jabrailov: shoot up a hotel — DONE. Leave some “white powder” in your room — DONE. Get slapped on the wrist with travel restrictions — DONE.

Some critics also highlighted the fact that Jabrailov is from Chechnya, a republic in the Northern Caucasus region of Russia where Muslim separatists fought two bloody wars against the Russian army. Now the republic is under the control of vocal, ultra-loyalist strongman Ramzan Kadyrov.

Critics have accused Kadyrov of numerous human rights abuses and effectively turning the republic into a de-facto independent fiefdom where Moscow law enforcement officers dare not tread. Therefore, the criticism goes, Jabrailov is Kadyrov’s fellow Chechen and a longtime ally, so he is just as above the law.

Others, like Konstantin von Eggert, a political expert writing for German broadcaster Deutsche Welle’s website, said that Jabrailov’s hotel “incident” was a sign of larger trend: Russian elites’ detachment from society and their unaccountability, both fatal for Russia:

If you're looking for a snapshot of a country slipping into terrifying uncertainty, and its blind elites, out of touch with their own people and committing slow suicide, here’s one. 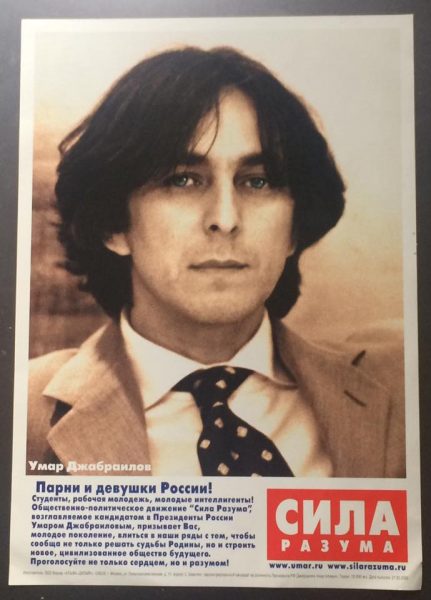 Umar Jabrailov ran for president of Russia in 2000, competing against Vladimir Putin. He was nominated by a youth movement called “The Power of the Mind.” Photo from Sergey Polyakov's Facebook, with author's permission

Jabrailov achieved some political notoriety in 2000 when he ran for president, competing against Vladimir Putin and a number of other Russian political heavyweights. He came last with 0.10 percent of the popular vote.

Today, Jabrailov is accomplished businessman known as an enthusiastic patron of arts — and a steady generator of controversy. He was involved in one of the first Russian-American joint ventures that ran a luxury hotel in Moscow. His American business partner Paul Tatum was brutally assassinated in 1996 after a string of disagreements with Jabrailov, but the latter’s involvement has never been proven.

His career in post-Soviet Russia has also seen a number of other conflicts involving his armed guards and, lately, heading Avanti, an “entrepreneurs’ association for promotion of patriotism in business”.

The daughter of Vladimir Putin’s spokesman Dmitry Peskov worked for that association. Immediately after Jabrailov’s detention, Elizaveta Peskova announced her resignation, and her father was forced to publicly deny Elizaveta’s connection to Jabrailov.