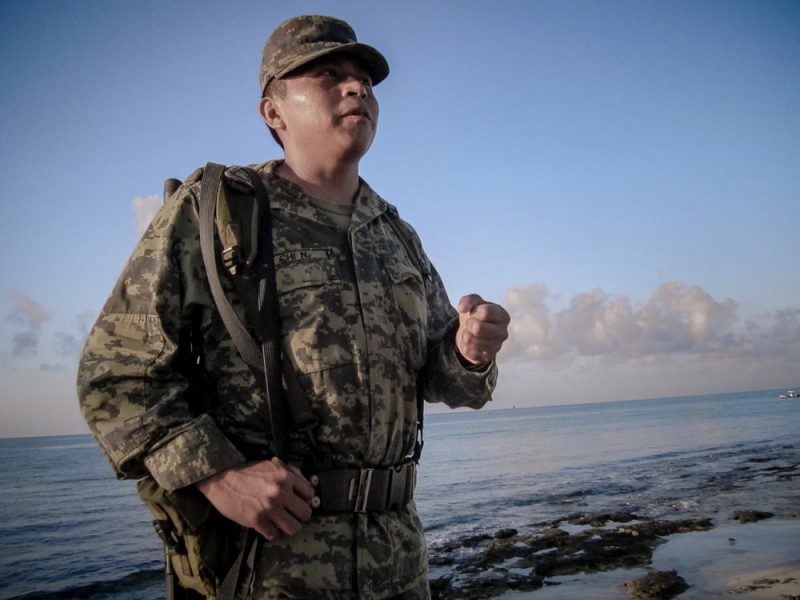 Meanwhile, even as heavy rainfall continued to pound down on Houston and surrounding areas over the weekend, President Trump found the time to remind Mexico about his plan to build a border wall.

With Mexico being one of the highest crime Nations in the world, we must have THE WALL. Mexico will pay for it through reimbursement/other.

In contrast, as this catastrophic ‘life-threatening storm surge’ hit the region, Mexican officials replied with an offer to help.

Described as a ‘landmark’ natural disaster, Carlos Sada, Mexico's undersecretary for North American relations, said late Monday, “Our offer is open and permanent. We're just waiting for instructions,” Sada continued, “Texas and Mexico share more than half the border. There are families, marriages, businesses that bind our two sides. This is about being good neighbors.”

Mexico’s declaration of support interrupts increasing hostilities and tensions between the US and Mexico over a long list of immigration policy battles, including Trump’s insistence that Mexico pays to build his proposed wall at the US-Mexico border.

Houston hosts the third-largest undocumented immigrant population in the country making up nearly 9% of its population. Hurricane Harvey has thrown undocumented residents into a further state of panic, fearing their requests for federal support may lead to deportation even though officials have reassured they will be protected. While Texan Governor Abbot has acknowledged Mexico’s relief offer, US government officials delayed acceptance of help from its neighbors but agreed readily to receive helicopters from Singapore.

It's been 40+ hours since Mexico offered the US help w/Hurricane Harvey's devastation. Trump's response: crickets. No thank you, no yes/no.

Journalist Pedra De Costa points out the irony of the situation:

Trump: Mexico will pay for the wall.
Mexico: Here's some humanitarian aid.

President Trump has not yet commented on the generous offer, but Secretary of State Rex Tillerson thanked the Mexican government on August 31.

It's very generous of the government of Mexico to offer their help at this very, very challenging time for our citizens down in Texas and now moving towards the border of Louisiana as well.

Stoking further controversy, Trump chose to announce the pardon of former Arizona Sheriff Joe Arapio on Friday evening as Hurricane Harvey first made landfall because it was likely to get ‘far higher ratings.’ Arapio displayed ‘boundless and illegal animosity toward immigrants,’ and some analysts describe Trump’s pardon as an ‘impeachable offense.’

Viridiana Hernández, immigration rights activist and executive director of Center for Neighborhood Leadership, spoke out against the pardon in tears:

We have fought for decades [against Arapio] and we are not done fighting. We’re not going to stop…We have lived under Arapio and have survived and we have thrived. We are going to resist like we have been resisting every single day for our whole existence.

Dreams deferred amidst the storm

While tensions continue to mount between the US and Mexico, Mexico’s foreign ministry released a formal statement of solidarity with the people of Texas and all those affected by the havoc wreaked in the storm’s wake. The gesture echoes similar relief efforts by Mexico in 2005 in response to Hurricane Katrina which struck Louisiana and surrounding states with catastrophic consequence.

NEVER FORGET that Mexico sent troops and aid to help us after Hurricane Katrina. pic.twitter.com/aD3K3ET1dZ

As Houston residents struggle to reach higher ground, many are also having to confront rumors of an impending threat to eliminate DACA (Deferred Action for Childhood Arrivals) allowing those who entered the US as minors to stay on renewable two-year permits to work and study. Nearly 200,000 undocumented immigrants in Texas have been approved for DACA since 2012 and Houston alone hosts 56,000 DACA-supported immigrants. Now, amidst the chaos and destruction of Hurricane Harvey, there is also an uncertain legal future to consider. A decision to end DACA would compound the suffering of thousands of Texans who see DACA as a lifeline among others they need right now to survive the storm.

Journalist Bradford Pearson points out the irony that ‘first responders’ and rescuers are actually immigrants or DACA youth:

Tens of thousands of Houston-area residents are going to fight for their lives this week, only to face deportation when Trump rescinds DACA.

For example, four Mexican bakers living in Houston didn't think twice about baking hundreds of loaves of bread for fellow flood victims when stranded over the weekend at El Bolillo Bakery.

With a reported death toll at 44 and thousands of displaced, an intense focus on rescue and recovery make it difficult to think about anything else. Yet, Houston activists continue to make calls and raise funds to avert further despair and 1,850 leaders including governors, state officials, civic and faith leaders have written a joint letter of support urging Trump not to kill DACA, especially not now, when the storm has taken away nearly everything but their dreams.