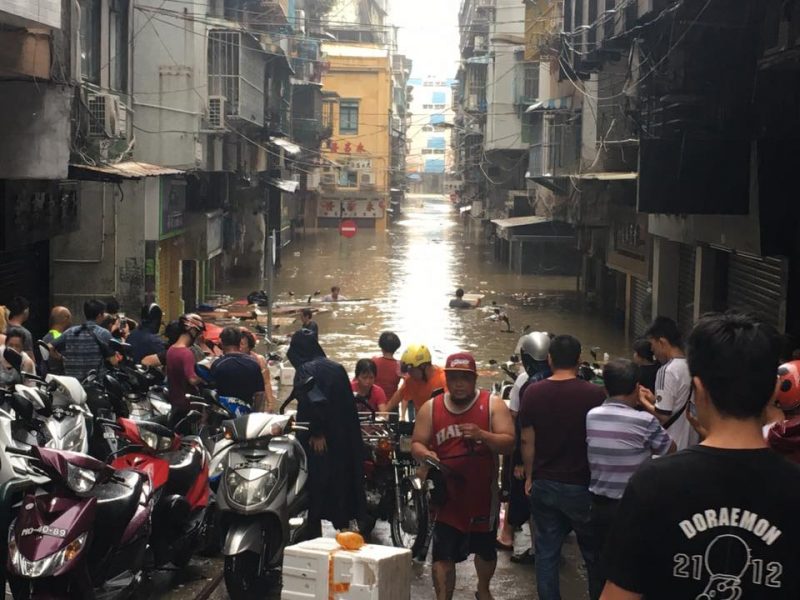 Below is a compilation of reports written by Catherine Lai and Karen Cheung originally published by Hong Kong Free Press between August 28 and 30, 2017. The post below is published on Global Voices as part of a partnership agreement.

Authorities in Macau, a special administrative region of China, are attempting to control the narrative around the aftermath of Typhoon Hato by ordering journalists to minimise critical reporting, barring Hong Kong journalists from entering the city, and cracking down on rumors.

Typhoon Hato swiped through Hong Kong and Macau on August 23. While Hong Kong, also a special administrative region of China, was relatively unaffected, the storm caused power outages, severe flooding, and at least 10 deaths in Macau, and is said to have been the worst storm the region has seen in 53 years.

Upon a request made by Macau Chief Executive Fernando Chui, the Macau garrison of China's People’s Liberation Army deployed on August 25 to conduct storm relief work. At the same time, the chief of the city's weather observatory, Fong Soi-kun, resigned and is being investigated by the Ombudsman in relation to the disaster following public complaints that city response and rescue efforts have been insufficient.

Against this backdrop, Macau police arrested two people, aged 73 and 68, on suspicion of releasing false information via mobile chat groups and private messages alleging that the authorities had sought to cover up the discovery of bodies in a car park during the typhoon.

Article 181 of the Macau Penal Code forbids citizens from spreading information which damages the credibility of any individual or institution which exercises public authority.

The Macau Journalists’ Association announced on Facebook that at least five media outlets, all members of the association, had instructed staff to publish more “positive” stories.

According to the post, employees from these media outlets were told to:

The association condemned the order as an act to “fool the public and distort the profession of journalists,” and said its purpose was to divert attention away from the government’s dereliction of duty. It expressed anger, saying it would follow up on the matter. It also asked the public to support the work of journalists in reporting the truth.

A media worker who wished to remain anonymous told independent news site Apple Daily that journalists would not be permitted to report in the field if they did not write more positive stories. They said that they received a call from their boss telling them that the tone of their reporting must be “harmonious,” and “if you don’t submit, then you don’t get to do [the work].” They said that other professionals in the industry knew of journalists in similar situations.

The association said that the value of journalism lies in warning the public, verifying information, finding the root of the problem, holding officials accountable and scrutinising their work, and preventing the same thing from happening again:

But after the storm hit Macau, the plan to deal with the flooding had not even come out, and we only saw the government busy clearing the noise, using ridiculous reasons to refuse entry to outside journalists; and [compelling] multiple local outlets to conduct self-censorship at almost the same time… with the intent to divert public attention and cover up the root of the problem.

Macau authorities refused entry to at least four Hong Kong journalists over the weekend of August 26.

The journalists intended to report on the destruction and clean-up efforts following Typhoon Hato. But Macau immigration said that they “posed a threat to internal security,” citing the Internal Security Law.

Mainstream public opinion in Hong Kong has questioned the Macau government’s decision to request the help of the People’s Liberation Army garrison in clean-up work. Many Hong Kong opinion leaders have criticized Macau's governance and dependence on mainland China.

We urge the Macau government to respect press freedom and not to arbitrarily restrict the rights of entry and exit of journalists in Macau…They were not trouble-makers. It was unreasonable for the Macau authorities to say they posed a threat to internal security. A number of Hong Kong journalists had been rejected entry to Macau in recent years. We have expressed deep regrets over the Macau authority’s arbitrarily restrictive immigration policy.

[The Macau Portuguese and English Press Association] finds the explanation given by the local authorities incomprehensible and unsatisfactory and cautions that this move, similar to previous ones of the same kind, tarnishes the international image of the [special administrative region] regarding press freedom.

Victor Chan Chi-ping, the head of Macau’s Government Information Bureau, was asked about the internal orders at a press conference. He denied knowledge of the situation, and said:

The government only supports the media – we never interfere with the internal issues of media outlets.