Okinawans Protesting US Military Base Asked If They ‘Understand Japanese’

Locals think the comment intended to mock the Okinawan dialect. 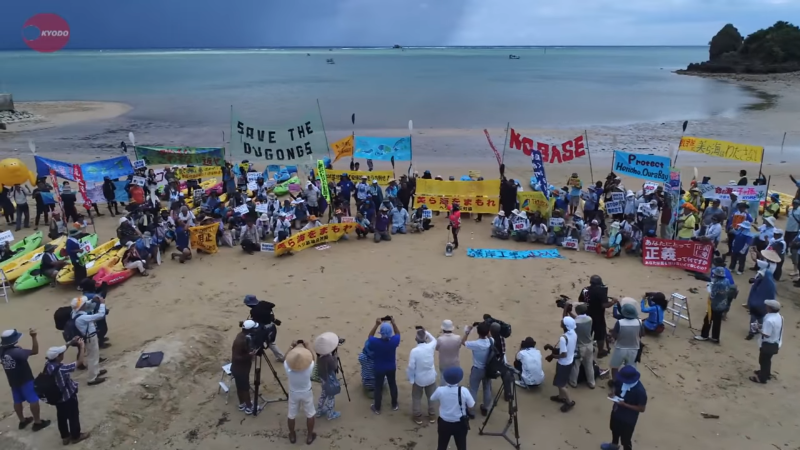 Okinawa's Defense Bureau has come under fire from residents, the media and local politicians after security staff under the command of the bureau used insulting language towards activists protesting the construction of an American military base by asking them, “Do you understand Japanese?”

The incident occurred on August 29 in front of Camp Swab, a United States Marines installation that sits on Henoko Bay in Okinawa, a Japanese island in the East China sea. The American military is in the process of building an airstrip on reclaimed land in Henoko Bay. Local activists have conducted a sustained campaign of civil disobedience to protest the base's construction, and the Defense Bureau, which is under the control of Japan's Ministry of Defense, is tasked with removing them.

Activists have long complained that Japanese security forces use heavy-handed tactics to deal with protests. For locals, the latest taunts and insults aimed at protesters by Defense Bureau officers underline how Okinawans often perceive themselves as being treated as second-class citizens, and not truly Japanese.

Once again, words that would wound the hearts of Okinawans.

According to an article by Tokyo Shimbun newspaper, the language used by security staff on August 29 was intended to mock the Okinawan dialect, which is quite distinct from the standard Japanese spoken by Defense Bureau officers. The incident received limited coverage in Japanese media.

At 2:56PM on August 28, the riot squad removed protesters engaged in a sit-in in front of Camp Swab. An officer of the Okinawa Defense Bureau called out from behind a fence to residents, “Do you understand Japanese?”

Besides the Tokyo Shimbun's short report, Yomiuri Shimbun newspaper described the Defense Bureau officer's remarks as “inappropriate” (不適切). Japanese Defense Minister Onodera Itsunori was quoted as saying he would like to caution Defense Bureau representatives “against using language that might invite misinterpretations” (誤解を招くような言葉遣いに気をつけるようしっかり注意したい).

Okinawa has historically been discriminated against because of its dialect and has suffered under American occupation. It's hard to forgive such language.

Once its own kingdom, Okinawa has long felt apart from the rest of Japan. Following Japan's defeat in World War II, the United States administered Okinawa until 1972. It was developed into a base for the American military in the Western Pacific; despite accounting for just 0.6% of Japan’s territory, Okinawa is home to over 70% of American military installations based in Japan. US military bases occupy at least 18% of the main island of Okinawa.

In 2013, Prime Minister Shinzo Abe and then Okinawa Governor Hirokazu Nakaima signed an agreement to build a new US Marine base at Henoko Bay, a relatively pristine area that will be destroyed by landfill to create the facility. The decision triggered ongoing protests and civil disobedience that briefly made national news, just as Okinawa marked the 45th anniversary of its return to Japanese sovereignty.

In April 2017, work commenced to fill in parts of Henoko Bay with rock to make way for a seawall and helicopter landing pad. Protesters showed up at the gated entry to the construction site, but were met with a crackdown by Japanese police. Okinawa Governor Onaga Takeshi sought an injunction to stop work on the seawall, with no success so far.

The remarks by the security forces may also be interpreted as questioning whether or not base protesters are truly Japanese, since there is the perception that many activists are foreigners.

Well, there are a lot of foreigners [at the protests]!

Can we really be sure everyone was able to comprehend Japanese?

In fact, the perception that Okinawan protesters may not be from Japan at all may come from deliberate disinformation campaigns, where right-wing counter-demonstrators pose as foreign agents.

The taunting by the Okinawa Defense Bureau officers highlights the divide that exists between local activists and the Japanese government, with no solution in sight.