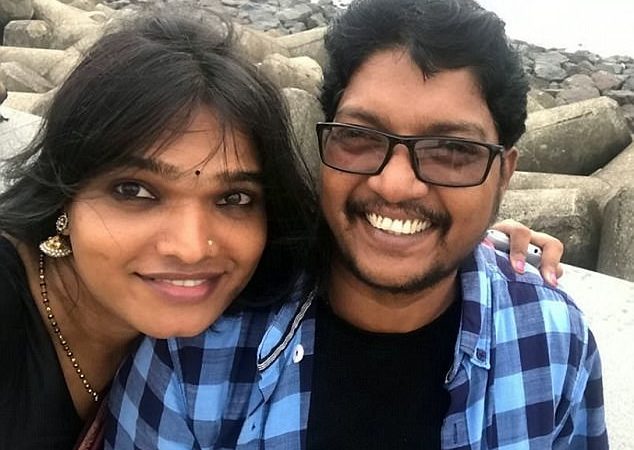 Aarav Appukuttan and Sukanyeah Krishna are in love. The transgender couple — Appukuttan was designated female at birth, and Krishna was designated male — met at a doctor's clinic while in a hospital awaiting gender reassignment surgery in India's financial capital, Mumbai, three years ago. A romance soon bloomed based on their shared passion for advocacy and struggles with gender identity, and they decided to get married.

News of their plans to wed and eventually adopt children made headlines around the world, but their joy over the international solidarity became tinged with anxiety after receiving death threats on social media. After lodging official complaints with the police, the couple tried to move on with their advocacy. They also sought help via crowdfunding for their surgeries, but they received more negative feedback and trolling. This came through various channels including Facebook, where threats of violence and hate speech are prohibited, but not always removed by the company.

The couple then decided to take down their crowdfunding campaign. Sukanyeah wrote on Facebook about the death threats:

I'm sharing a screenshot of a video Published in ScoopWhoop News. Below that video there is a comment published by a person named “Mayank”, and he is calling out to “Kill us Both.” Certainly! It's from a Fake Profile.

Now my reply to Mayank:
Man, we both might be ‘Gays’ for your eyes! But we've shown enough guts to come out in the public and reveal who we are, what we are planning… Do you have enough guts to use your own name and picture in a facebook profile and make such a comment? If you have enough “Mardangi” (manhood), do that! We're waiting…

I know there many psychos and phobics out there in the middle, but why are you targeting us? Just because, we live a REAL Life? without hiding ourselves? We too have the same rights to live in this world, as you all are having… We aren't disturbing anyone else. In fact, we've to fight a lot to survive itself. We don't enjoy any privileges to make it easier So Please… Live and Let live!

In 2014, India's Supreme Court declared transgender people a “third gender”, a ruling that protects their access to education and employment. Nevertheless, stigma remains and transgender people are often targets of harassment and attacks, or are even forced to beg or engage in prostitution for survival. According to a survey of 2,169 transgender people by Swasti Health Resource Centre, four in 10 transgender people in India have experienced sexual abuse by the time they reached puberty.

This reality has led people like Aarav and Sukanyeah to fight back. Global Voices spoke to the couple in a telephonic interview. Below is a brief transcript.

Global Voices (GV): You have received death threats on social media. How has this affected you?

Sukanyeah: We've received varied responses from people. While some are super appreciative others have issued threats saying, “Kill the LGBT dogs” on Facebook. I don't now why we are being targeted but it's very similar to the transphobia and homophobia that triggered the Orlando massacre [in the United States in 2016]. People think we are outcasts or aliens but we are not the ones creating problems. We just keep to ourselves and still face attacks. They don't know anything about us, gender identity disorder yet they read headlines and abuse us. It hurts us and demeans our struggle to a greater extent.

In fact, now, we are even scared to publish our wedding dates and our security will get compromised. We are poor and we don't know how to handle goons if they threaten us so our best chance is to get a private wedding ceremony done.

This negative feedback is forcing us to hide. It takes a lot of courage to come out in the first place and accept your identity.

Aarav: We have filed complaints against a few accounts on social media for issuing death threats against us. Most of them are fake and based out of Kerala. We try and be as polite as possible in our responses but sometimes, it's just hard to be kinder when they want to end our lives and it is disturbing.

GV: And what about the positive responses?

Aarav: We are happy, we have received a positive response from everyone across the world except some miscreants locally. We are happy people are trying to understand our situation and it gives out a bigger and much significant message of acceptance of the gender-identity disorders.

GV: What is the plan for the wedding? Do you expect any legal hassles?

Aarav: We don't expect any legal hassles from our marriage under India's article 377 as we both are legally male and female now. Officially, we have received our government documents as well and are waiting for more documents before we can solemnize our marriage.

GV: How did you meet?

Aarav: We met three years ago outside at a doctors clinic where Sukanyeah had come for her treatment. I heard her talking in Malayalam and that's how we started talking. My family is supportive of our union.

GV: What are your future plans?

Aarav: We want to start a non-governmental organization for members of the transgender community and want to create awareness among parents. They should not ignore their children dealing with gender dysphoria or gender identity disorder. They should instead support them and we hope we can set some example. We are hopeful parents will reach out to us and seek our counseling.

Sukanyeah: My family disowned me when I was young and let me down because I was a transgender. I faced many troubles and left home at 18 to work in Bangalore and save money for my surgeries. I worked in call centers, worked as a freelance in Information Technology sector and started my hormonal treatment to transition into a woman. That's when my relationship with Aarav blossomed and I don't think seeking support from my family will yield anything positive. I was heartbroken at their rejection but now plan to focus all my energies on starting a non-governmental organization by December to aid other trans individuals.

GV: How do you summarise your journey?

Aarav: After 45 years of hiding behind a woman's mask, I am finally free to live my life as a man and don't take those seriously who want to insult or mock me. Also, I would want to advise those opting for surgeries to go to a renowned doctor instead of falling for botched surgeries which are more dangerous.

GV: What about starting a family?

Both Aarav and Sukanyeah: We want a child to complete our family and inspire us to do good for the world and I am sure we will make wonderful parents.

Global Voices uses the GLAAD Media Reference Guide to ensure that our reporting on transgender people is respectful and effective. We encourage anyone who wishes to share or comment on this story to do the same.