Amid a Teacher Strike, a Powerful Image Shakes Up Peruvian Social Media 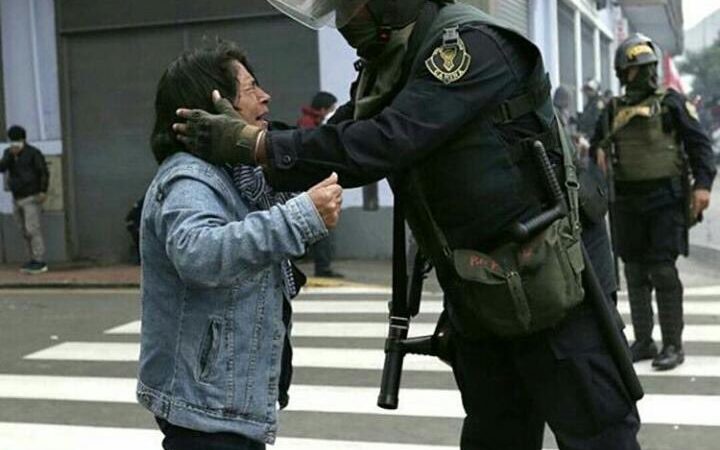 Since June 15, 2017, news in Peru has been dominated by a national teacher strike called by the Union Labor of Education Workers of Peru (SUTEP). The strikes have taken place in many cities, with some leading to clashes between protesters and police officers. Amid the chaos, one photo has taken social media by storm as a beacon of peace in the conflict between teachers unions and the Peruvian government.

The basic demands of the strike were salary raises and the postponement of a teacher evaluation, which had been planned for this year and would continue until 2018. By late July, both sides had managed to agree on a raise over a base of S/2,000 (a little less than USD 600) and a 30-teaching hours work week. However, reaching terms for evaluations turned out to be more difficult. Some agreements were made, but not all of the union leaders accepted the conditions.

Meanwhile, public sentiment is in favor of carrying out teacher evaluations.

The situation is aggravated by the fact that there is more than one teacher's labor union involved in negotiations. Besides SUTEP, there is also the National Committee of Reorientation and Reconstruction (CONARE), Democratic SUTE, various federations and SUTEP dissidents. The points of disagreement, in general, are linked to the teacher evaluation, as many fear this could mean that many teachers could lose their jobs.

But the complications don't end there. The arguments are complex and they take place not only between the government and unions, but it all gets tangled with other conflicts associated with the very complex recent history of Peru. The Minister of Interior, Carlos Basombrío, claimed that among the union leaders there are individuals with ties to a faction of the Shining Path, a communist militant group formed in the 1980's, and asserted that the “government won't dialogue with any sectors connected to this terrorist group”.

Days go by, negotiations go forward on one side and they get tangled up on another. Meanwhile, there are children who haven't been attending school for over two months now. There is a risk of losing the school year in public schools, a year that had already started late after the heavy rains that affected several regions in the country due to the so-called Costal El Niño.

For days, teachers have been organizing protest marches in several Peruvian cities, and in some cases, police officers have violently suppressed them.

It was amid this context that the image of a police officer and a female teacher shook Peruvian social networks:

A police officer comforts a teacher –she could be his mother– amid the repression and chaos seen today. An image that gives you back some hope.

Beto Ortiz, who is the most followed Peruvian journalist on Twitter and whose own mother worked as a school teacher all her professional life, highlighted the great impact the picture had in his Sunday opinion column titled, “She Could Be Your Mother”.

I was surprised […] when I heard this police officer from Huancayo, Rodolfo La Rosa Ariza [one of the two individuals in the image], telling a reporter […] what was in his mind at the moment of chaos: “When I saw her tears and despair, I told her: madrecita [literally meaning little mother, a colloquial term used to address ladies that mixes respect and consideration], I'm here to protect you and I will take you to a place where you will be safe. I hugged her and took her face with my hands. She made me think of a teacher I once had”. With […] all that paraphernalia of a riot officer, the policeman looks huge and scary, he looks like a bad guy from a futuristic movie, some kind of Robocop or Darth Vader. But the single gesture of caressing this petite lady on the face makes him –magically– a tender giant.

The picture was widely shared on Twitter, garnering awards and acknowledgment that were shared on social media for the police officer in the photo:

Police officer who comforted a teacher during teacher strike was given an award.

Meanwhile, in some cities, teachers went back to work in their classrooms while in others, the the protests continue.