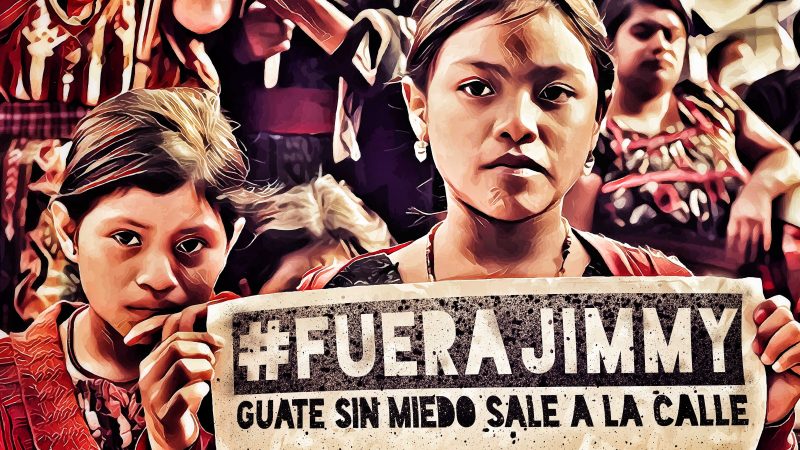 “#OutWithJimmy. Guatemala without fear goes to the streets.” Illustration made for the a Mexico-Guatemala organized campaign. Image originally published by Prensa Comunitaria and used here with permission.

Now, the Constitutional Court of Guatemala has stepped in, suspending the president's decision and declaring that he acted “illegally.”

Many Guatemalans saw the court's ruling as a step forward in the struggle against corruption, and a reason to celebrate online:

Fireworks, applause, and speeches in celebration for the resolution of the Constitutional Court confirming that Ivan Velázquez stays [in Guatemala].

The destiny of the commissioner is uncertain, but the popular support and trust he's received in Guatemala and internationally are key to the success of CICIG's mission: to independently investigate the activities of illegal security groups, clandestine security structures, and mafias undermining the rule of law.

Who are the president's supporters?

President Morales is currently under investigation for receiving illicit funding. He is backed by a considerable number of parliamentarians — many of whom are being investigated as well — and also by municipal authorities. He's also received support from former presidents and the most conservative sector of Guatemalans, formed by the neo-Pentecostal churches, the association of army veterans, and libertarian scholars. As noted by Raúl Bolaños on in-depth journalism site Plaza Pública:

The president's support is found in a nationalist discourse, in the threat of the use of force and the ambiguity of the elites in religious institutions who don't want an environment of uncertainty. The president refined this struggle, backed himself with religious conservatism and added an exacerbated nationalism to the whole mix.

The level of aggressive speech is escalating, with authorities hinting at violent means they've used in the past during the 36-year-long civil war, as noted by journalist Allan Nairn:

Álvaro Arzú, oligarch &former president who has his own intel force,hints at a return to war if Guatemala's anticorruption chief isnt ousted https://t.co/hi3HJxonL4

Those asking the president to resign have described Arzú's alliance with Morales as a “corrupt [politicians’] pact,” a description that quickly became a hashtag and flooded Guatemala's networks: #PactoDeCorruptos.

Those in favor of illegal finance raise your hand. #CorruptPact

When you are backed by a president in prison, Otto Perez Molina, and a fugitive who perpetrated a coup d'etat, Serrano Elias. #StateCrisisGT

In the following days, the process to get the authorization from the Supreme Court to remove the president's immunity will begin. While municipal authorities are backing him, an increasing number of Guatemalans are returning to the public squares in different cities, asking him to resign.