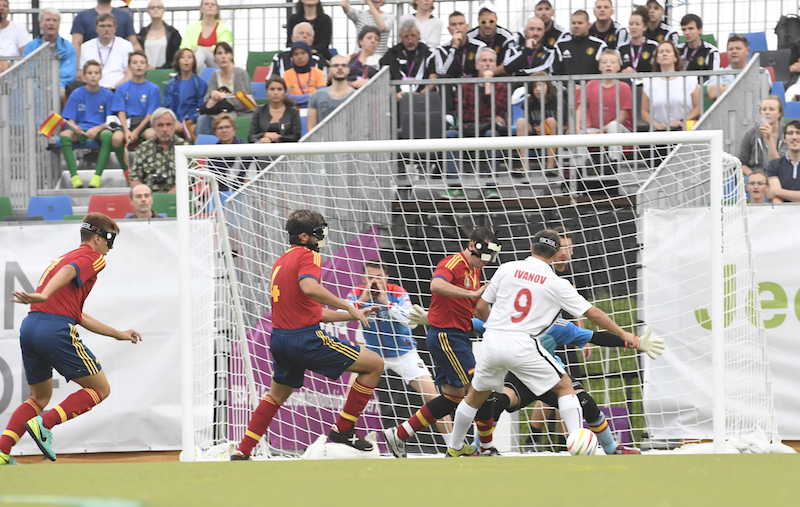 The Russian national blind football team was declared the 2017 European Champions on 26 August after beating Spain in an intense final. In front of an enraptured crowd in Berlin, where the tournament was taking place for the first time, the teams needed penalties to separate them, after the match ended in a tie.

This is an important breakthrough for a country where Paralympic sports are chronically underfunded and all Russian athletes, including Paralympians, have been under extra scrutiny and subjected to blanket bans in the wake of a doping scandal.

The Russian team was initially done 0-1 in the first half, but regained parity through an excellent individual effort from player Denis Egorov. Russia eventually emerged victorious in a penalty shoot-out 4-3, with Andrei Tikhonov, who was also voted player of the tournament, scoring the decisive goal. 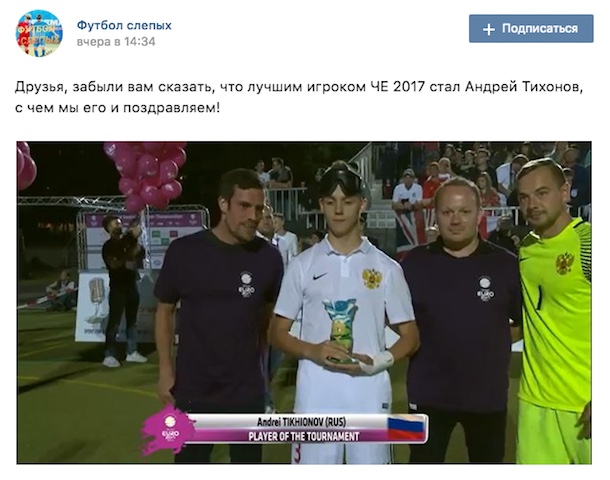 A screenshot from Russian blind football players’ and fans’ Vkontakte community page. “Friends, we forgot to tell you that Andrey Tikhonov has been declared the player of the tournament at EURO 2017 — and so we extend our congratulations to him!”

Egorov in his post-match interview shared his delight at the victory: “It was a fantastic game and it is a fantastic feeling. Spain is a giant of European football, it was a pleasure to compete against them.”

Spain is indeed a giant of the game, largely responsible for the development of blind football. The country hosted the first national tournament in 1986, and then the first European Championships in 1997, overseen by the International Blind Sports Federation (IBSA).

But this was not the only edge to Russia’s opponents in the final. The Russian team had succeeded in qualifying for the 2016 Paralympic Games in Rio de Janeiro, having finished runners-up in the 2015 European Championships. However, the team was disqualified from the Games due to the ban levied on Russian Paralympians as part of the wider doping scandal. The team that replaced them in Brazil? Spain.

Globally, blind football, a specially adapted form of 5-a-side futsal, is on the rise, attracting more players and recognition. Whilst in Russia there is an established annual national tournament and new programmes being set up for blind footballers, most recently in Dagestan, the overall picture is not so positive, according to the trainer of the national team, Nikolay Beregovoy.

“Blind football [in Russia] is regressing. The number of teams is decreasing, they are just disappearing”, Beregovoy lamented in 2016 in an interview with R-Sport, a sports news website affiliated with RIA Novosti, Russia's state news agency. “The worst thing is that no-one cares – neither the RFS (Football Union of Russia), nor the Ministry of Sport.”

Beregovoy was keen to praise individual efforts to support blind football, such as the Director of Paralympic, Deaflympic and Non-Olympic Sports in Moscow, Dmitry Kotyrev, and the Mayor of Dzerzhinsky, Vitaly Panamorenko, who, having seen the Russian team play, built specialised facilities, giving players a place to train in winter, and provided equipment, namely the adapted balls that make a sound allowing players to locate them in play.

What is lacking on a grassroots level, he said, is systematic infrastructure and consistent funding. “Usually everything hangs on one person, who takes the team to games, gets equipment and all the rest with their own money. If that person leaves, then there is no team, no sport as such.”

“The sum of one [football] agent’s commission could help a blind team exist for half a year, or even more.”

It is not certain yet whether the success of the Russian team on the international stage will attract more interest, and crucially, funding to all levels of blind football.

Financial challenges notwithstanding, the Russian team is in a good overall shape and its future is promising. Thanks to their victory in the European Championships, the team has qualified for the World Cup, to be hosted next year in Madrid. The stage for a rematch is set.

And as Beregovoy comments in an upcoming documentary film, “winning the World Cup or Paralympic Games – it’s worth a lot.” For a country that often fails to support and provide opportunities for its citizens with disabilities, there is a sense that more is at stake than just the trophy.