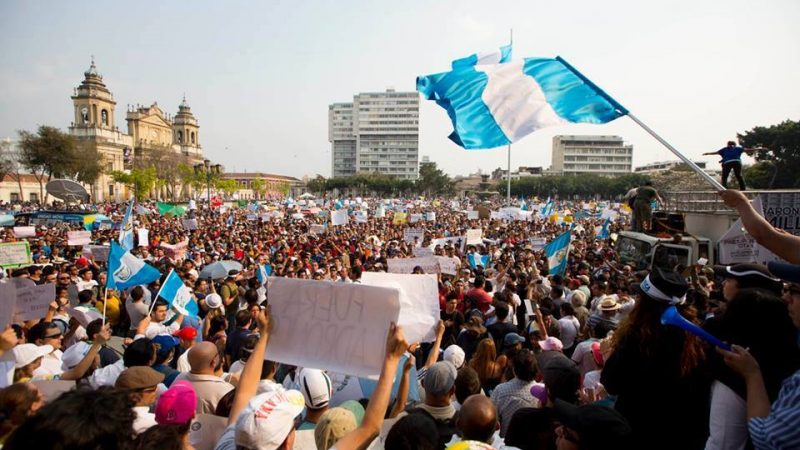 On August 25, the International Commission Against Impunity in Guatemala (CICIG), an organism backed by the United Nations and authorised to operate in Guatemala by the state itself, launched a case uncovering illegal funding received by the largest political parties, including the officially elected party, the MCN. Guatemala's attorney,Thelma Aldana, general and CICIG have made requests to remove immunity of parliamentarians and start a process to investigate the president for the second time in only two years.

President Jimmy Morales traveled to New York the same day to persuade UN Secretary General António Guterres to remove CICIG's current chief, Ivan Velásquez of Colombia, but his attempts failed. He then declared Velásquez “persona non grata” (Article 9 Vienna in the Convention on Diplomatic Relations – 1961) in an attempt to expel him from the country. This decision was widely condemned internationally, while partially supported locally.

On August 27, peaceful protests to condemn the president's decision and express popular support for the UN Mission took place with student unions, private universities, social movements and indigenous authorities. Later in the day, the Constitutional Court temporarily suspended the decision while the magistrates, mandated to interpret the Constitution, gathered to determine whether or not the president acted within his rights. Beyond the legal analysis underway, the real test is the legitimacy and decency of the president's decision. Transparency International's president said:

Back to the Public Square again, demanding president's resignation

For many Guatemalans, the current crisis is a setback on the road toward greater accountability after a long and painful struggle with corruption. Instead, the crisis has called Guatemalans back onto the streets, demanding once again the resignation of the president whose campaign motto was “I am not corrupt, I am not a thief.”

Ongoing protests have taken place in other Guatemalan cities as well as in Mexico and US. The newly elected leadership of the public university called on all students to get together and support the fight against impunity, peacefully demanding that the current president resigns, and stating strongly that “this generation of Guatemalans rejects corruption.”

Guatemala: Thousands on the street and the square occupied with chants saying #OutJimmyMorales #JimmyGoesAway

For journalist Javier Lainfiesta, recent events resemble the crisis of 2015. He says there is a deep feeling of uncertainty but thinks Guatemalans will be able to get through it, precisely because of the state's weakness:

In these moments there's a strong rivalry among the different powers (of the State, dark powers, good ones, the poor and the rich, etc.) that could define the future of the country in the years to come […] We live in a country where the State is so absent that when it is really missing, no one notices.

But some groups welcome the president's decision. They used #FueraIvan (“Down with Ivan”) or #YoSiTengoPresidente (“I Do Have a President”) to support the decision. On Twitter, many supporters have rejected the notion that a foreign official could have the power to investigate their government's affairs or that he could be considered a hero. Velasquez's detractors advocate for national sovereignty and use his Colombian nationality as an ad hominem argument to discredit his work:

First tweet: For the sake of Guatemala, Iván Velázquez should continue fighting against corruption and organised crime.

Illicit funding of campaigns and even youth movements is a major issue that stretches into the illegal financing of political parties and emerging political movements, as summarised in Nomada, an online platform. The Commission has prosecuted powerful people and the stakes are high in Guatemala's battle to end impunity, including a dozen former parliamentarians, ministers, a vice president, businessmen and bankers:

The candidate who used to call himself “neither corrupt nor a thief” couldn't comply with his own campaign slogan before winning the elections. Between the first and the second electoral round in 2015 […] Jimmy Morales received at least Q 6.7 million (almost 1 million USD) that he hid from the Supreme Electoral Tribunal.

With significant popular support, the CICIG will continue working on all cases, but an increasingly hostile government might make their mandate difficult.

The president may declare a “state of siege,” authorizing his government to restrict freedom of movement and speech, which could increase international condemnation for and isolation of Guatemala. Guatemalans anticipate two very important processes in the upcoming weeks: lifting immunity for President Morales and all parliamentarians under investigation and ousting Mr. Velásquez.

After that, different scenarios and possibilities range from a move to dissolve Congress to speedy elections.