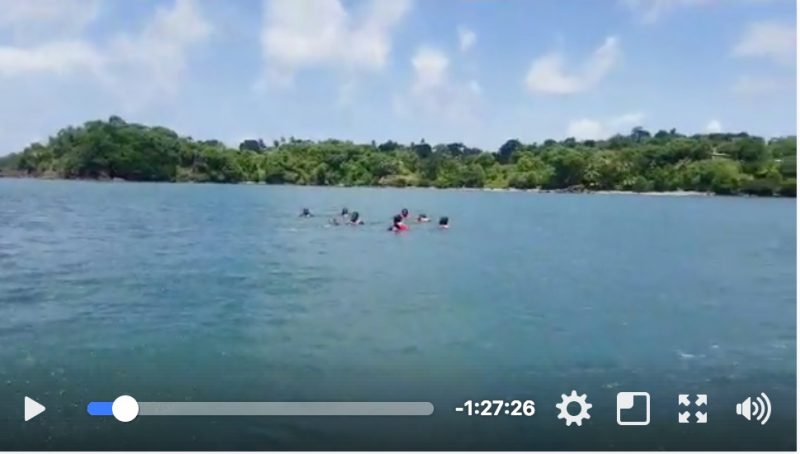 Screenshot from a Facebook video of the livestream of Watson Duke's arrival in Toco, on Trinidad's north-east coast.

Trinidad and Tobago politician Watson Duke, who vowed earlier this month to swim the 30-kilometre distance from Tobago to Trinidad, took the plunge this morning, August 28. The stunt by Duke, who is president of the Public Services Association (PSA) and minority leader of the Tobago House of Assembly (THA), was in protest at the unreliable ferry service between the two Caribbean islands.

Social media user Patricia Nicholson streamed Duke's takeoff on Facebook Live from the Scarborough Fishing Facility, where people from “all sides of the political divide” had gathered for the occasion.

The Swim, as Duke's undertaking is being called, was due to begin at 8 a.m., but was delayed by nearly an hour, due in part to a speech the politician made by loudspeaker from the tray of a pickup truck. His message: “If something is for Tobago, Tobago must decide.”

Comparing the THA's relationship with Trinidad and Tobago's central government with a dysfunctional parent/child dynamic, he accused the latter of excluding Tobagonians from the consultation process about the inter-island ferry service. While the two islands should be equal partners, Duke said, it was clear to him from the government's actions that Tobago is “a colony of a colony.” He maintained that the THA must be the final decision-maker on matters concerning Tobago.

Admitting that his team was not one of expert swimmers, Duke said the point of the whole endeavour was to emphasise that Tobago has been “put in a position where swimming may be the only option. . . Because swimming is the only thing we have control over.” He also said that “the time for Tobago's deliverance is now,” a statement that could be seen as either careless or calculated, and which might have put the fraught issue of secession back on the table.

But there was still the matter of that 30km swim. This morning, Duke updated his Facebook cover photo with a drawing done by his seven-year-old son, commenting that:

As young as he is, he understands the issues of his Dad leaving home in Tobago East with a brave face, with Tobagonians and the Sea Bridge on his mind…goes to the ocean and swims to raise the matter of Tobagonians pain and hardship over the poor Sea Bridge.

Once Duke began his aquatic undertaking, several media outlets began to livestream  the event. Among the things that amused netizens was the fact that Duke wore a life vest; and that, quite early in his swim, he climbed into a kayak, which then overturned. As the drama turned into comedy, Facebook user Kathryn Stollmeyer-Wight republished the words of an observer:

He swam a bit, then got towed by a canoe, then the rope burst, then the canoe capsized with him in it. He tried getting towed by a jet ski for a bit before getting into the pirogue.
He said that waves were ‘ten meters high’ 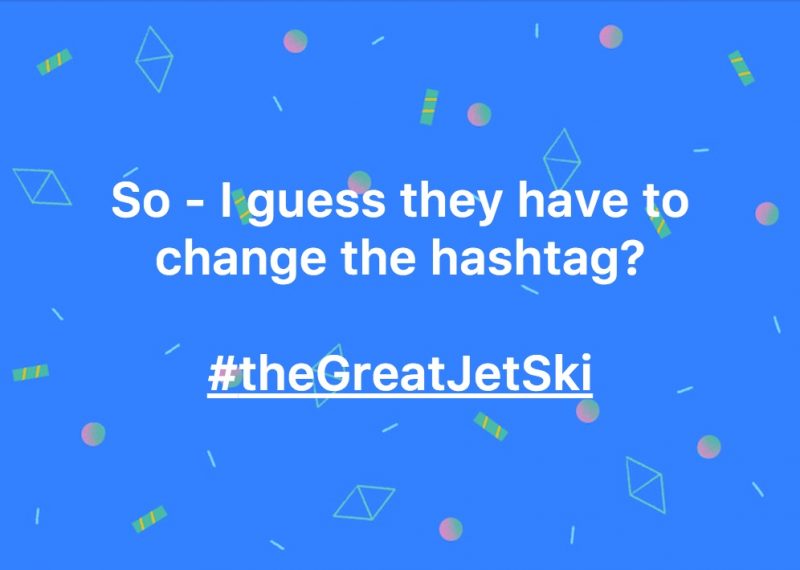 Facebook status update by Patricia Worrell, which reads, “So – I guess they have to change the hashtag #theGreatJetSki”.

Duke's outing quickly changed from a relay swim to something entirely different, and social media newshound Clydeen McDonald had a lot to say about it on Twitter:

Watson Duke tells the crowd that they will not be “swimming all the way” & that the expected arrival time in Trinidad is 1PM. #TheGreatSwim pic.twitter.com/8COqTiBQBo

He compared Duke's media tactics to those of US president, Donald Trump:

Remembering that faux-populism is the reason we have President Trump, maybe we should proceed with caution with it comes to “men of action”.

Trumpism 101: Stating something HUGE will be done/happen and in the end putting forward a minor gesture. Result: “Well he isn't all talk…”

Noting that #TheGreatSwim had turned into #TheGreatTow, McDonald suggested that Duke only wanted the attention:

People prefer to believe a journalist is lying than believe a politician is on shit.

Meanwhile, satirical site Wired868 weighed in with the following:

It was Trinidad and Tobago’s most disastrous relay attempt since the men’s 4×100 team at the Rio Olympics.

Bizarrely, Duke said his actions were meant to show why the central Government should hand over the decision-making process for inter-island travel to Tobagonians. On this evidence, though, the THA Minority Leader might struggle to organise a round of drinks at a half-empty pub.

Facebook user Natasha Ramnauth observed that the comments on the livestream were “hilarious and sad all at the same time.” But there were others who supported Duke and saw the bigger picture of the protest action. Lesley-Ann Noel said:

Allyuh laughing at #Watson but those Tobago transport woes are real. Maybe it's a PR stunt, but it's a bold move to draw necessary attention to travel challenges between Trinidad and Tobago. 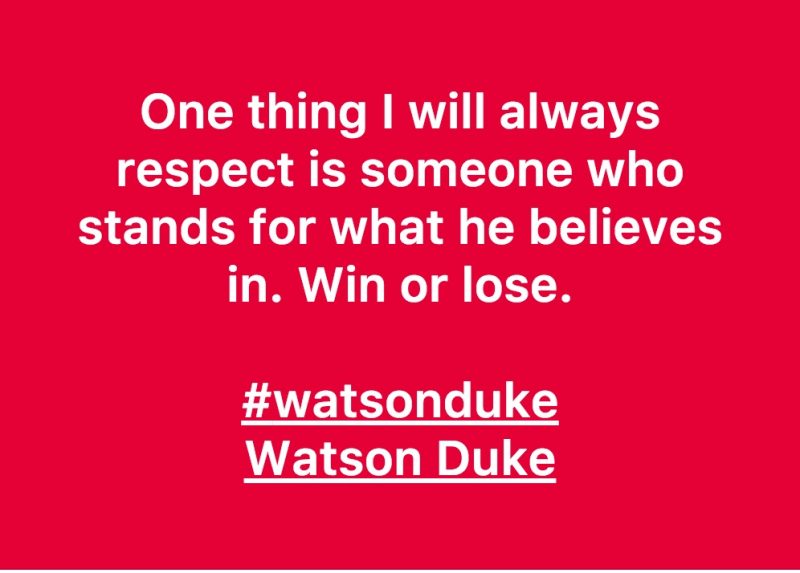 Facebook status update by Christophe Pierre, which reads, “One thing I will always respect is someone who stands for what he believes in. Win or lose. #watsonduke”

Respect to Watson Duke…he could swim/be towed – it does not matter. Standing up for what he believes and fighting.

While supporters prayed for his safety, one Facebook user compared Duke with Rosa Parks. Another expressed admiration for him because he “sticks to his word”.

Tobagonian Avion Hercules called the move historic, and said it was about much more than one man:

This is about a Tobagonian who represents a sect of the population that voted and feels justified enough to make a stance for a cause. The story that we should be telling our children isn't that Watson is doltish or he's mad. Rather, the story that this Tobagonian is taking up a cause for the people of Tobago whom he represents. He will be recorded in history whether we like it or not. I want to be able to tell my son the story of the Tobagonian who felt justified in taking public stance in protest of poor treatment towards Tobagonians. For me, this matter is not one about party politics but about matters that affect even me as a Tobagonian. An historic moment indeed. […] Even if you did not vote for Watson, all Tobagonians should feel justifiably proud.

Duke had initially estimated that he would make landfall on the northeastern tip of Trinidad at about 1 p.m. Trinidad and Tobago time, but by mid-morning it was reported that he was “travelling by boat to the waters outside Toco where he will resume his swim to the shore.” He finally ended his journey at around 2:30 p.m., where he and his teammates spoke to the small crowd that had gathered.

The landing was also live streamed. In talking with the media, Duke said that he would deliver letters to the country's president and the Port Authority of Trinidad and Tobago (PATT), asking them for a meeting to discuss the sea bridge. He also wants to meet with Caribbean Airlines, which operates the airbridge between the two islands, suggesting that perhaps the time had come for the northeastern Trinidad community of Toco and Tobago to forge political ties, and that his journey has not ended. Duke promised more “unorthodox” actions, identifying his next destination as Port of Spain, Trinidad's capital city.

In a final symbolic gesture, Duke planted a sapling he had dug up that morning from his garden in Tobago.

[He] reiterated that Tobago should decide on the airbridge and sea-bridge between the two islands.

But don’t Trinidadians use the ferry and airbridge for professional and personal reasons too? Is the problem really that a Trinidad and Tobago government made the final choice; or that the process continues to be tainted by corruption?

Yes watson you really proved yourself as a politician today. Lie to the people. #WatsonOnWater #watsononajetski #watsononapirogue

In fact, the fraudulent aspects of the “swim” were, to some people, more a source of irritation than inspiration. As Patricia Worrell declared:

If you want me to respect a gesture, at least respect it enough yourself to make the kinds of preparations that will either make success seem possible, or will show you're prepared to die for a cause. Duke has done neither. […] Awareness of the issue? We have it. An immediate solution to Tobago's problem? Unlikely. […] The only possible ‘achievement’ here, then, is to place Duke even more visibly in the public eye.

Seems we Trinbagonians are always looking for a Messianic Clown to save us in crisis.
And yet, sadly, we will never willingly make the sacrifices necessary to save ourselves.

Activist Tillah Willah, along with other Facebook users, echoed this sentiment:

This morning's reading: ‘The Short Distance Swimmer and the 10K Views’ a chapter from another post-colonial tale of the hapless, helpless citizens of Tiny Rock who gather to stone the self-proclaimed hero who is trying to make people forget he is a villain, but really who can tell the difference these days, in a land where the heroes are talkers with the most views and doers are laughed at or cursed at or feared.
A madman pass the crowd and bawl out ‘which is worse, to be critical to the point of wishing death for someone's protest action? Or to stifle your country slowly because of your own inaction?’
Nobody heard the question […] Another hilariously tragic episode in the story of a people who could easily win their own race but are too busy ole talking on the sidelines to be bothered to start. 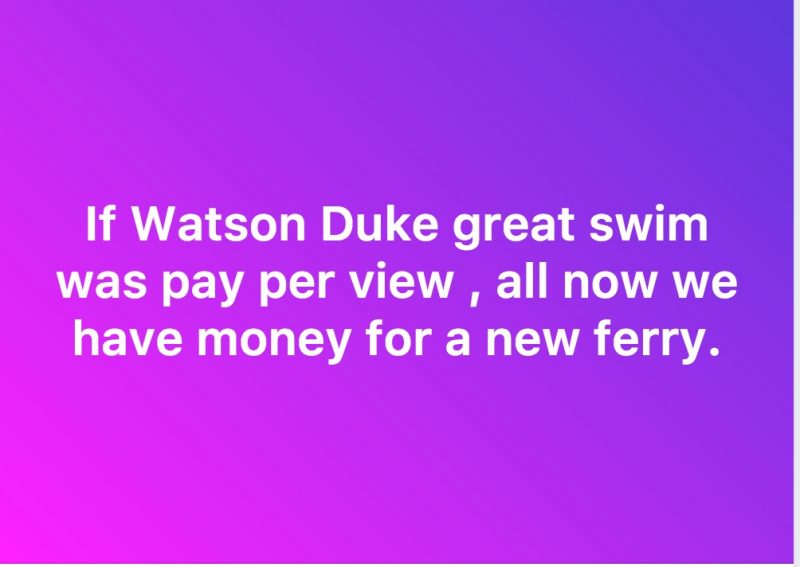 Facebook status update by Clyde Tha Law Jemmott, which reads, “If Watson Duke great swim was pay per view, all now we have money for a new ferry.”