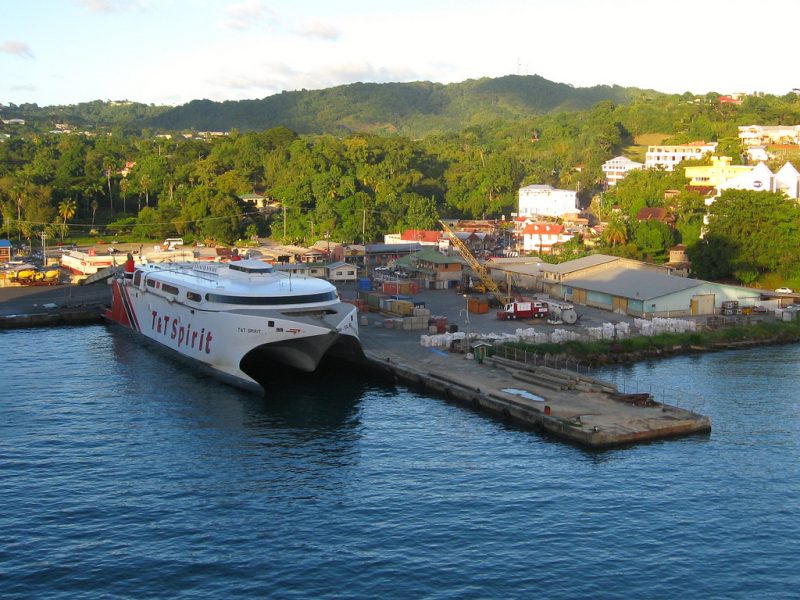 A politician has promised to swim the 30-kilometre distance between two Caribbean islands as a mark of protest. A veteran swimmer has said he doesn't stand a chance. The national Coast Guard service has said it cannot guarantee his safety. But he is taking the plunge anyway.

Trinidad and Tobago may be one country, but it comprises two islands connected by a domestic airbridge, as well as an inter-island ferry service that transports both passengers and vehicles. The ferry service has recently come under public scrutiny, after the procurement process for the new Ocean Flower 2 vessel fell flat.

When the vessel's supplier, the Canada-based Bridgemans Services Group, had twice failed to meet its delivery deadline, the Port Authority of Trinidad and Tobago (PATT) moved to terminate the procurement contract with a view to putting out a tender for a new ferry. This left just two passenger vessels in operation between the two islands — the T&T Spirit and the T&T Express — and one cargo ship, the Cabo Star — since the MV Superfast Galicia was pulled from the route in April 2017.

There have been calls from both the opposition and civil society groups for police probes and commissions of enquiry into the debacle, to determine whether or not the procurement process was transparent.

The public pressure became so great that Prime Minister Keith Rowley felt the need to apologise “to the affected citizens, particularly the people of Tobago, for whom the service is more of a life line”. He also called on PATT to secure a new vessel “in the quickest possible time” and appointed an investigator into the ferry procurement scandal in the form of “seasoned and successful businessman” Christian Mouttet.

This appointment acted as the catalyst for the second chapter of what has come to be known online as the #FerryTales.

Watson Duke, the president of the Public Services Association (PSA) and the minority leader of the Tobago House of Assembly (THA) swiftly demanded Mouttet's appointment be revoked. Despite Mouttet's considerable business experience, Duke said, the position required “someone versed in public procurement policies and the rule of law”; an opinion that was shared by the advocacy group Fixin’ T&T.

Then, in what many netizens interpreted as a dramatic political ploy, Duke declared that he would swim relay-style from Tobago to Trinidad in protest over the procurement glitches and unreliable ferry service. As of this writing, Duke was set to be accompanied on his swim by the other members of the minority council and a smattering of Tobago fishermen.

The big event is scheduled to take place on August 28, 2017. While several athletes have tried with varying levels of success, it cannot be confirmed whether anyone has ever completed the roughly 30-kilometre swim.

Knowing this, netizens have been reacting to Duke's grand gesture with picong and sarcasm. 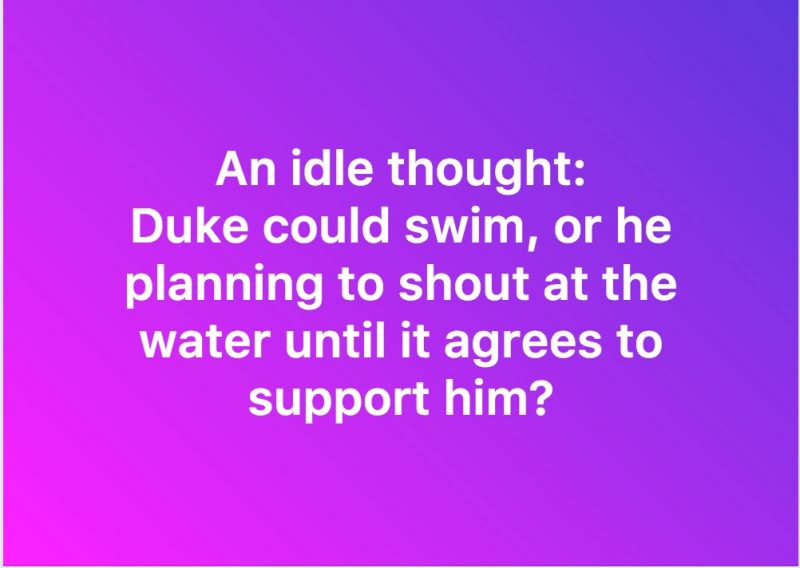 Facebook status update by Patricia Worrell, which says, “An idle thought:
Duke could swim, or he planning to shout at the water until it agrees to support him?” 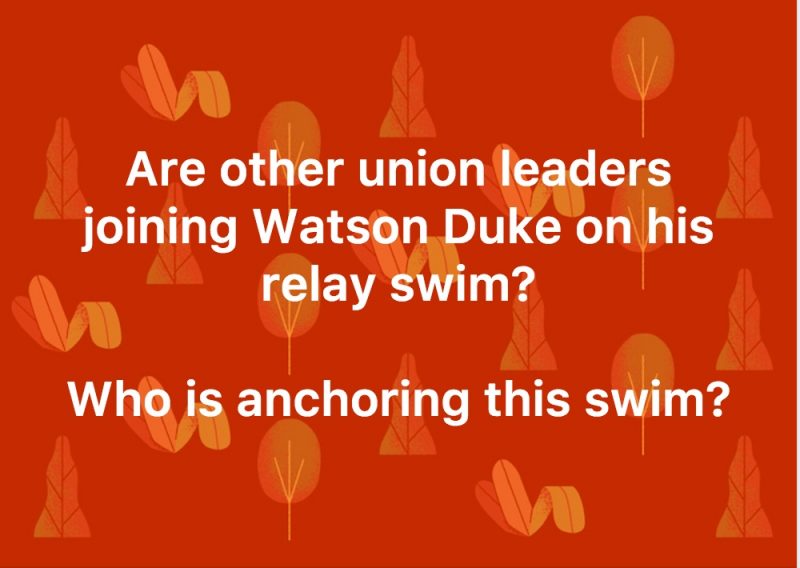 Facebook status update by Rhoda Bharath, which reads, “Are other union leaders joining Watson Duke on his relay swim? Who is anchoring this swim?”

Journalist Laura Dowrich-Phillips posted a series of hilarious one-liners about #TheGreatSwim that ranged from saying she hoped Duke had a GoPro to wondering whether he had a stunt double. 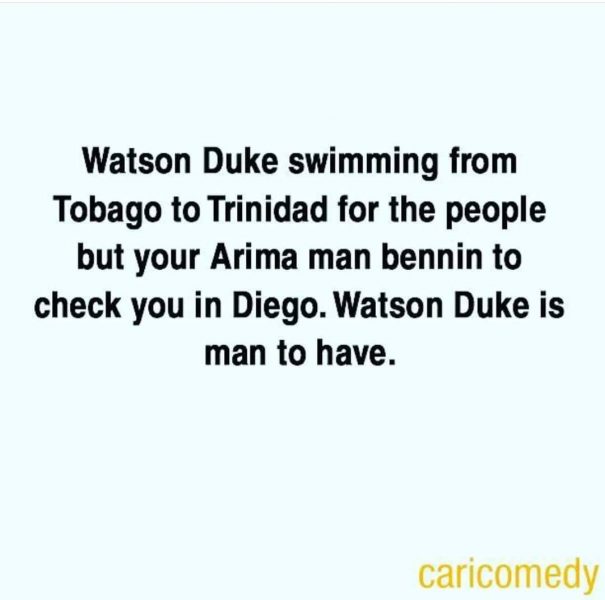 A meme from Caricomedy about the Watson Duke protest swim, which translates as: “Watson Duke is swimming from Tobago to Trinidad for the people, but your boyfriend from Arima (in east Trinidad) is complaining to come visit you in Diego Martin (in west Trinidad). Watson Duke is the kind of man to have.”

But it was after Duke posted a photograph of himself in a wetsuit and life vest staring out to sea that social media really went into overdrive. 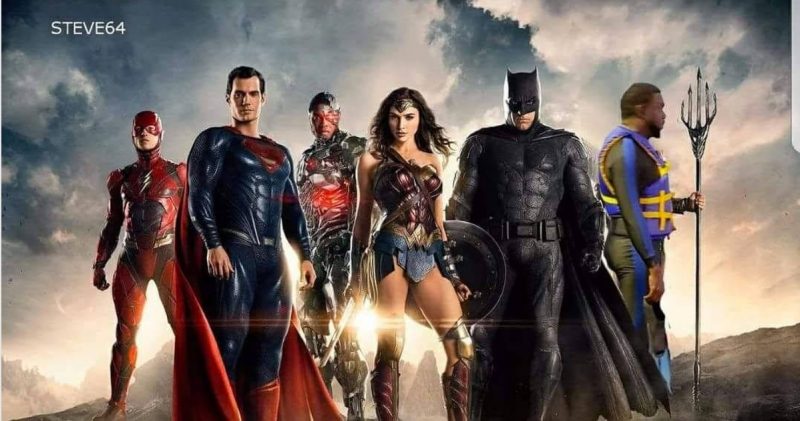 A humourous take on The Justice League, with Watson Duke as Aquaman. Meme widely shared by Trinidad and Tobago social media users. 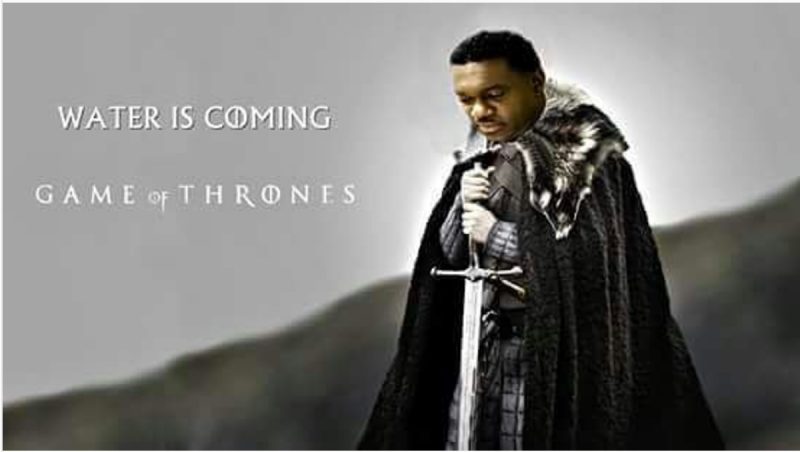 Another meme, this time inspired by the popular TV series Game of Thrones, which reads, “Water is Coming.” Widely shared on social media.

Even the snarky marketing team behind a popular beer brand couldn't resist getting in on the action, posting a short video of a bobbing beer bottle wearing a life jacket as the fast ferry passes in the background, accompanied by a graphic with the words “Sink or Swim, We Reachin'”.

‘Stuck on the literal, missing the figurative’

If Duke is aware of the online banter at his expense, he seems to be ignoring it, focusing instead on his training regime for the undertaking, which he has shared on Facebook.

A few social media users expressed support for Duke, praising his determination and pledging their solidarity. Patricia Worrell shared a comment from “a Duke supporter”:

They not seeing past the actual swimming. It is not about the swimming. It is about the ppl here punishing and suffering…no untrained person could actually swim that distance but ppl are so stuck on the literal they are missing the figurative.

…Here's my very real dilemma: I believe that the people of Tobago DO have a real problem…
But their self-appointed champion has little or no credibility…

She went on to say that she hasn't been seeing any online manifestations of “the admiration and adoration Duke was hoping for”. Duke, she said was nothing more than “a blasted farcical Pied Piper”, while his followers were “Don Quixotes of the Crossing”.

Meanwhile, the satirical news website Wired868 had a field day, accusing Duke of “add[ing] a touch of brain-numbing farce to a sobering scandal”.

Though Duke claims that he is approaching the swim safely, with support boats in tow, the Trinidad and Tobago Coast Guard has issued a press release warning against the undertaking and absolving themselves of any responsibility.

“The Coast Guard cannot provide any dedicated resources or give any assurances for a voluntary expedition of this nature at this time,” the release noted.