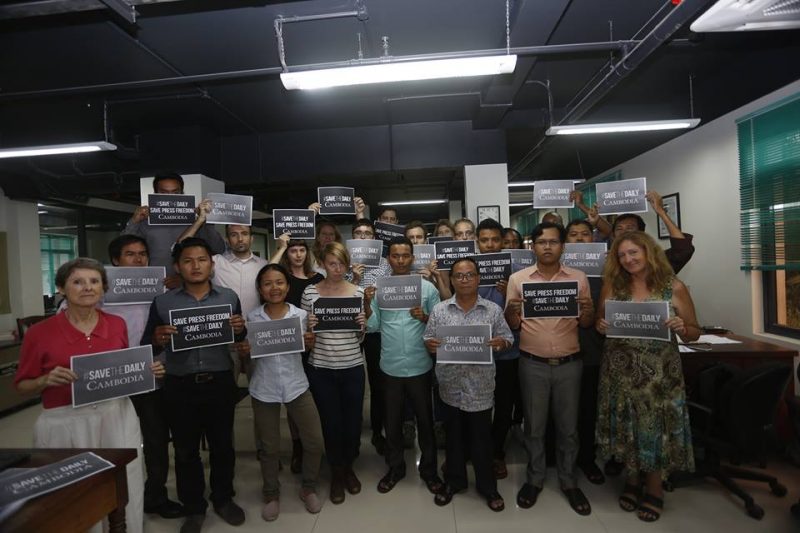 Cambodia has threatened to close down six media outlets in the past three weeks: one daily newspaper, two foreign media services and three local radio stations. The government has said these media companies violated the country’s tax and licensing laws, but several media groups and the political opposition believe the closure orders were meant to silence critical voices ahead of the 2018 general elections.

The English-language Cambodia Daily, established in 1993 as a social enterprise, is being accused of failing to pay taxes. The publisher has denied the charge.

Furthermore, the paper was reportedly not given the opportunity to appeal or negotiate the tax case.

Meanwhile, Radio Free Asia (RFA) and Voice of America (VOA) in Cambodia — both sponsored by the US government — were also threatened for not being registered with the tax department.

The license of Moha Nokor FM 93.5, which broadcasts both RFA and VOA content, as well as opposition party programs, was also revoked by the government.

Voice of Democracy (VOD) also experienced a disruption in its 3 provincial stations. It was initially reported that the disruption was a technical problem, but later it was confirmed that the radio station was ordered to stop broadcasting. VOD hosts programs that are critical of the ruling party that has been in power for the past three decades.

Yi Chhor Vorn, director of Moha Nokor, is trying to clarify the government’s reason for shutting down the radio station:

They told me the reason they closed is because we did not inform them about information of air-time sales to the clients. But I think we have been doing our job already. We pay tax, we have a license and of course we follow all the guidelines.

The abrupt closure of media companies is seen by several groups as a form of political harassment by a ruling party which lost a significant number of seats in the 2013 general election.

PA Nguon Teang of the Cambodian Center for Independent Media warned that the “suppression of independent media will badly affect the country's election processes.”

Chak Sopheap of the Cambodian Center for Human Rights asserted that “without a free media, the rich and powerful’s chokehold over public life in Cambodia would be complete.”

Overseas Press Club of Cambodia issued a statement supporting Cambodia Daily, one of only two English language dailies in the country:

The Cambodia Daily has a history of running stories that have angered the government leading many to believe the tax department is being used to target critics ahead of the 2018 general elections.

It appears that the Cambodian government has been using legal technicalities to hide behind its real aim of silencing independent voices. The government has prioritized shutting down of media outlets over providing fair procedures to address their liabilities.

Legaspi added that Cambodia’s licensing laws are vague and that the government should have opted to sit down with media companies accused of failing to comply with the country’s regulations instead of closing them down.

But Information Minister Khieu Kanharith denied that the government is harassing independent media.

The ministry has shut some radio stations because they violated their contract. We have reviewed some other radio stations, which also rent time to VOA and RFA, and they remain open.

He also insisted that the issue involving Cambodia Daily is solely about tax violations:

Aside from closing down several media outlets, Cambodia is also clamping down on foreign NGOs which has led many institutions and even foreign governments to express concern about the deteriorating political situation in the country.