How to Save Languages from Dying, and What I Learned While Documenting My Own 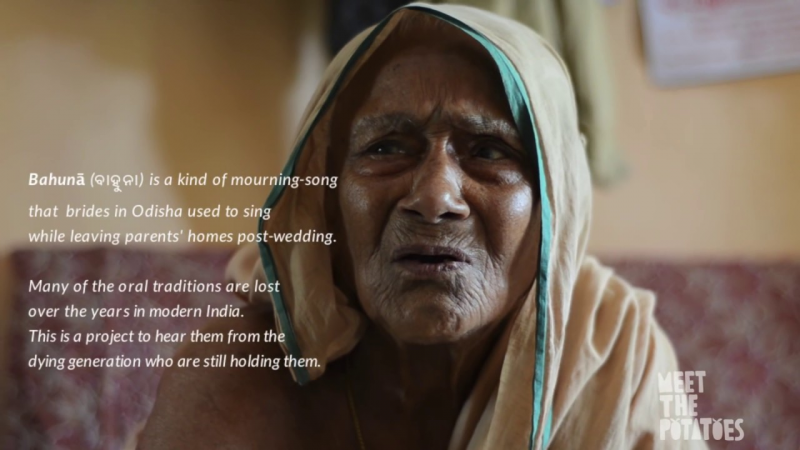 A screenshot from the author's YouTube video of his grandmother.

This story is based on a talk given by the author on July 15, 2017 at the TEDx Youth@AmaatraAcademy in Bangalore, India.

It was during the winter of 2014. I was at home, researching the storytelling patterns of my community. I spent days trying to persuade my grandma to tell me some of the stories from her time. But she’s always been moody, and she wouldn’t comply.

Then one morning, out of the blue, she started telling me stories. After the first one, I had this gut feeling that I had to record it, even though I didn’t know how I would use it. So I covertly took out my camera and started shooting.

My grandma didn’t just narrate the stories—she made herself part of them. Relating a sad episode that the characters were going through would make her shed tears. And she would burst into laughter at a happy ending.

She also sang me a few songs, songs that brides used to sing after their weddings as they left their parents’ homes to go and live with their in-laws. These were songs about separation, originally filled with sorrow. But slowly it became a social phenomenon. People started creating literature around it, adding humour and sarcasm. And because not everyone is good at crying, the whole thing would be rehearsed beforehand, and women like my grandma played a great role as master trainers.

I had a great time recording these unique songs and stories of my community. I uploaded them and made them available publicly online.

But I didn't understand how valuable those recordings were until I met Daniel Bogre Udell, who told me about a project he and his friend Freddie Andrade were building called Wikitongues. They were collaborating with volunteers around the world to record videos of people narrating a story or incident in their native languages. I loved the idea. Videos on Wikitongues helped me learn about many beautiful stories from all over the world that would have been totally hidden otherwise. They also inspired me to add subtitles and more information to my recordings.

Unfortunately, many languages are dying, and quite rapidly. UNESCO estimated that almost half of the 6,909 living languages in the world might have vanished entirely within the next century. We lose at least one language every two weeks. 220 Indian languages have died in the last 50 years. 197 Indian languages identified by UNESCO as endangered are at risk of dying soon. We’re becoming increasingly monolingual. And as linguist Steven Bird has pointed out, research has shown that the brains of monolingual people deteriorate faster.

Languages are influenced by contact with other languages. Sometimes the change is irreversible. The fate of our languages is also decided by socio-politics. For instance, public policies determine that certain languages become the standard in education, scientific research, and governance, while others are left to die a slow death. Because it's not obviously profitable to create media in “minority” languages, the growth and enrichment of those languages suffer, and many remain entirely undocumented.

Just a few hundred years ago, the Latin alphabet was largely unknown on the continents of Africa, the Americas and Asia. But thanks to the colonialism, the Latin alphabet is now the norm in many countries. Much less is known about the original scripts of the languages of these parts of the world. Fortunately, scholars have studied and documented some of these languages and writing systems, and their work allows us today to discover many fascinating stories from those cultures.

While it is interesting and advantageous to know more than one language, our native language is particularly important, as it is the tool in which we most easily encode and decode our emotions, our stories, and our secrets.

If we don’t start documenting languages digitally—especially the endangered ones—we may lose the colourful diversity of human civilisation. Languages are a gateway to new worlds. And not everything is translatable. Languages can also be important repositories for indigenous knowledge—knowledge that is relevant to modern society. It’s up to us, as speakers of minority languages, to decide how long we want to keep our languages alive.

Some time ago, I was interviewing a Karbi language speaker. Karbi is an endangered language spoken by about 41,900 people in the Indian state of Assam in northeastern India. My interviewee told me about a festival called Cho Mang Kan that memorialised dead ancestors. The festival involves lots of dancing, feasting, and drinking of locally-brewed spirits, and it's also a place for young people to find their future spouses.

The thing that fascinated me most about Cho Mang Kan, however, is that my community has a comparable festival, and similar festivals exist across South and East Asia. Even though I read about these festivals before, experiencing it in person in a different community felt like a rediscovering a part of myself. We might not look the same, and speak different languages, but deep down inside we are closely connected. Had it not been for the recording I was doing, I would never have experienced this connection so strongly.

Maybe documenting a language is not your thing, and that's fine. Not everything is for everyone. But in thinking about how to encourage more people to document the dying languages, I noticed something interesting. My wife creates funny video messages using Snapchat’s voice changer and those cool video filters, and send them to her siblings. They would then reply with their own funny video messages. The striking aspect of this is that the language they use in their Snapchat conversations is the one that was spoken in their grandparents’ generation. Not many people today speak that language anymore. So here you have young people using augmented reality, deep learning, and artificial intelligence to—albeit inadvertently—help a marginalized language stay alive.

The lesson here is that people don’t need to make language documentation their religion—there are fun, creative ways you can use language that so the same thing. It would be great, however, if these activities were taking place outside of private spaces like Snapchat, as we desperately need more of this kind of content on public digital platforms.

How you can help

So, I want to leave you with four ways to consider for creatively documenting languages you hear around you:

1. When you meet someone new, show a little curiosity and ask them what language they speak with their grandparents. Ask them to tell you a story, sing a song or just say a few words, and record it.

2. Use the tools you already love and use—Snapchat, Facebook, Twitter?—and host a live session on social media where you invite a guest to narrate a story or teach you a traditional game of their community, and record the session.

3. Share your recordings publicly under an open license that allows others to make use of your work in a way that allows them to credit you without having to request permission each time. I would personally recommend the Creative Commons licenses, as most multimedia platforms like Vimeo and YouTube allow them. There are also open source platforms like the Wikimedia Commons, Internet Archive, and ma where you can upload your recordings along with tags and metadata that make the content searchable. Three researchers from the University of Washington recently conducted an experiment using public domain video and audio files of President Obama’s speeches. They used artificial intelligence to manipulate the videos so Obama appeared to be lip-syncing to the pre-recorded audio. The result was fascinating and surprisingly realistic, but they could do this only because those videos and audio files bore a public domain license.

If many of us take the actions above, we will soon have a large library of multimedia content in scores of native languages. That could lead to important developments, some of which we probably cannot even imagine. Tools like text-to-speech could be built from audio libraries to help people who are illiterate, autistic or visually impaired access knowledge and contribute to the knowledge commons.