But some Macedonians think there's more to the story. 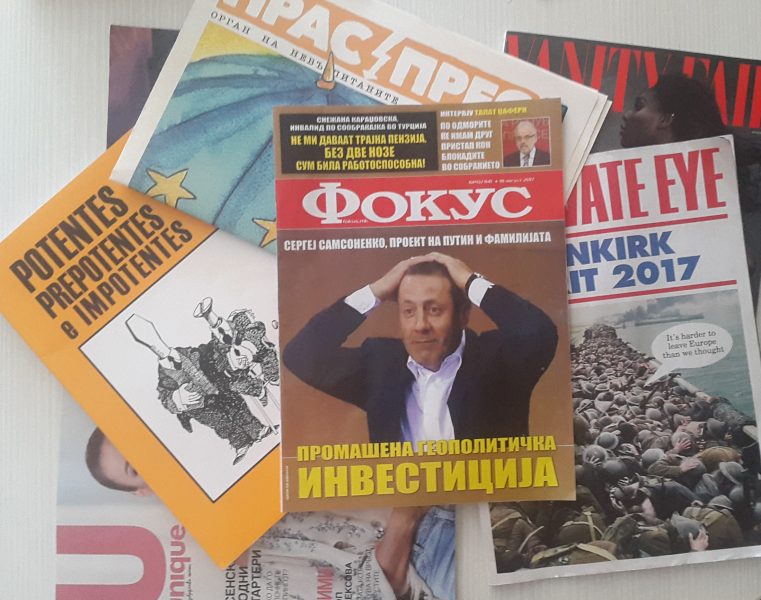 Several publications including (center) Fokus weekly from Macedonia with the headline “Sergei Samsonenko, a joint project by Putin and the Family: Failed Geopolitical Investment.”

Sergei Samsonenko, a Russian businessman and honorary consul to Macedonia, announced that he will give up his ownership of three Macedonian sports clubs because of the insulting comments some fans had posted on social media about him.

Many in the country, however, are theorizing that it's an excuse for Samsonenko to escape possible scrutiny from corruption investigators over his business dealings.

Since his arrival to Macedonia in 2006, shortly after the government lead by nationalist VMRO-DPMNE came into power, Samsonenko made a name for himself as an investor who often received government support for his projects, which are run through off-shore companies registered in Cyprus and Belize.

Back in Russia, he owned a betting company BETCITY and had some issues with the authorities. In Macedonia, Samsonenko has come to own betting parlors and over 30 various companies. Over time he also acquired three sports clubs: the biggest football club in the country, FK Vardar, as well as the male and the female versions of Vardar Handball Club. All three had been among the most successful of Macedonian sports teams in recent years, which helped boost the businessman's public image.

But on August 11, Samsonenko published an emotional open letter stating that he will renounce his ownership of all three clubs because he was “deeply upset” by the offensive comments football fans had been writing about him over high ticket prices for a Europe League match between Vardar FC and the Turkish club Fenerbahçe:

This is the last season in which I, Sergei Samsonenko, invest as an investor in all three sports clubs in Macedonia. After this season, I will return the three clubs to the former owners in excellent condition, with championship titles, good ranking and no debts.

In the letter, Samsonenko also said that he wasn't in it for the ticket money and announced that he'd lower the price to 300 denars (around six euros or seven US dollars), from the original 2,000-3,000 denars

Reactions from media close to the former VMRO-DPMNE government (which was favored by Russia) praised Samsonenko's generosity and lamented his departure, without digging any deeper into his decision. The rest of the Macedonian public, however, didn't so easily accept that the move was only because of social media vitriol.

Under the ironic hashtag #ThanksSamsonenko (#ФалаСамсоненко in Macedonian), one Twitter user wrote:

All over the world fans insult and badmouth club presidents, yet no president has left a club because of that. #ThanksSamsonenko

Others pointed to his links to the former “ruling family” of Macedonia (headed by ex-Prime Minister Nikola Gruevski and his cousin, ex-secret police chief Sasho Mijalkov) and other businessmen who are accused of being in their pocket, such as Orce Kamchev, one of the richest people of Macedonia who owns factories, retail stores, hospitals, and media companies.

“Will Kamchev now have to buy out 14,000 square meters of real-estate and a bunch of betting parlors in Skopje?” is a hard question to ponder during this summer heat. #ThanksSamsonenko

One of the issues noted by the SCOOP documentary is that according to FIFA's Code of Ethics, people involved in the betting industry should not be involved in professional football:

25: Integrity of matches and competitions

Persons bound by this Code shall be forbidden from taking part in, either directly or indirectly, or otherwise being associated with, betting, gambling, lotteries and similar events or transactions connected with football matches. They are forbidden from having stakes, either actively or passively, in companies, concerns, organisations, etc. that promote, broker, arrange or conduct such events or transactions.

Regardless, during the same month, Samsonenko received the award for “The Best Sports Worker for 2015/2016″ by the Macedonian Football Federation.

Samsonenko was also the recipient of official honors: In 2016 he was declared a honorary consul of the Russian Federation to Macedonia.

An analysis by the Croatian sports portal Telesport suggested that the real reasons for the departure are potential investigations related to financial malpractice and tax evasions, similar to those in Russia. A new government came to power on May 31 in Macedonia with promises to investigate all allegations of corruption.

Such efforts, however, have been stalled so far by officials who were appointed by the leadership of the former ruling party. But if and when they get underway, the authorities who allegedly used Samsonenko as proxy for shady business deals, including government tenders, would no longer be in a position to protect him, Telesport author Mihovil Topić argued.

Meanwhile, Samsonenko is refuting the claims that he's fleeing and taking his capital with him. While meeting with the players of the Macedonian Handball Club Vardar after his original announcement, he assured them that he'll remain owner for another season.