A Popular Japanese Cosmetic Surgeon Is Called Out for Admiring Nazism 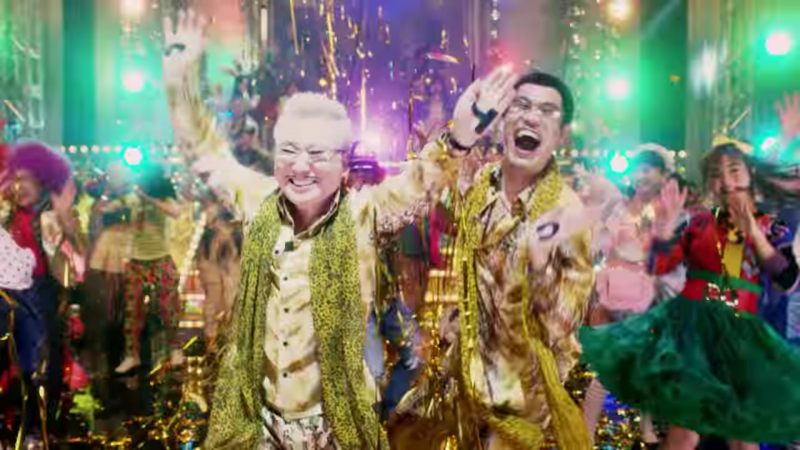 A commercial for Takasu Clinic, featuring Takasu Katsuya (left) and Japanese viral entertainment sensation Pikotaro (right). So far, the YouTube upload of the TV commercial has been viewed more than 1.2 million times. Screencap from official Takasu Clinic YouTube channel. NOTE: Since this article was published, Takasu Clinic has removed the video from YouTube.

A prominent Japanese cosmetic surgeon has earned the condemnation of the Simon Wiesenthal Center, a US-based Jewish human rights organization, after a blogger translated a series of his pro-Nazi tweets into English.

Dr. Takasu Katsuya has apparently been tweeting his admiration for the Nazis in Japanese since at least 2015. Despite this, he remains a popular, if controversial media presence in Japan, regularly appearing on prime television programs and wildly popular commercials for his business.

Reportedly a billionaire, Takasu, 72, has gained renown in Japan and throughout the world for his innovative approach to cosmetic surgery.  After opening his first cosmetic surgery practice in 1976, he steadily grew a chain of clinics across Japan, while introducing liposuction to the country and patenting new techniques such as pubic hair transplants and armpit gland treatments. Takasu is a member of several prominent Japanese medical associations, as well as the American Academy of Cosmetic Surgery.

Takasu is also known for making outrageous statements, as well as for his public feuds. In late August 2017, Takasu's decision to take Onishi Kensuke, a member of Japan's opposition Democratic Party, to court for defamation made headlines.

Takasu admired the Nazis and denied the Holocaust in past tweets.

However, when Estonia-based blogger Kino Toshiki, a member of Japan-based Counter-Racist Action Collective (C.R.A.C.), decided to translate some of Takasu's tweets about Nazism into English, Japanese media started to examine Takasu more closely, especially after the Simon Wiesenthal Center stated that Takasu's Twitter posts “violate all norms of decency and reveal a person who is a racist antisemite and outright lover of Nazism.”

On his blog, Kino Toshiki gathered and, with help from translator and activist Katsumi Takahiro, translated some of Takasu's tweets from October 2015. In them, Takasu expresses admiration for Nazism. He also denies that the Nanjing Massacre, committed by Japanese troops against Chinese civilians and disarmed combatants, and the murder of Jewish people and others at Auschwitz concentration camp during World War II had occurred:

There is no doubt that the Jews were persecuted. But we only know it from hearsay and all of it is based on information from the Allies. Aren't we acting the same as the Chinese people who believe in the Nanjing Massacre? I only want to know the truth.

I think both the Nanjing and Auschwitz are fabrications.

That particular string of statements was triggered by an initial tweet of his in which he credited a Professor Kuroki with showing him “how great Nazism was” (ナチスの偉大さ):

Reunited with Hon. Prof. Kuroki who taught me how great Nazism was when I was studying at the Kiel University in Germany. I’m so glad for having received his encouragement just now!

Kuroki Yoshikatasu works as a surgeon specializing in hip replacements at Zama General Hospital in Kanagawa Prefecture, west of Tokyo, and sits as a board member on a number of national medical committees in Japan. According to his CV, Kuroki at one time headed the department of orthopaedic surgery at the University of Kiel, in Germany. As one Japanese Internet commenter remarked, Kuroki does not appear to have any specialist knowledge of history.

At the time, many questioned Takasu's statements about Nazism and the war, sparking a Twitter debate that would last for several weeks in October 2015. For example, when asked, “I wonder how Dr. Takasu thinks about the fact that 200,000 people who were regarded as physically or mentally disabled were massacred by so-called ‘German medicine’ under the Nazi regime?”

I think it is Allied propaganda. In the massive air raid on Tokyo [during the war], far many more people were massacred in one single night. I wonder how you people think about that.

Takasu also used Twitter to repeatedly express his admiration for Nazi science and medicine, including making the following statement:

Until we [Japan] were defeated in the Greater East Asia War, Japan's medicine followed German-style medicine. There was a remarkable progress in German medicine under the Nazi regime. So what is so wrong about being delighted to reunite with Hon. Prof. Kuroki who taught me this?!

His tweets fail to mention that medical science under the Nazis was known for its heinous experiments on concentration camp prisoners who were killed or left permanently disfigured in the process.

More of Takasu's translated Twitter posts have been translated by Kino Toshiki, and can be read here.

In an email interview with Global Voices, Kino said he chose to highlight the Japanese cosmetic surgeon's online posts because Takasu “repeatedly makes these kinds of statements, such as justifying Japan's invasion of Asia, admiring kamikaze pilots, making hate speech against Korean people, and so on. I just picked up some of his most extreme statements this time.”

Takasu's personal opinions don't seem to have affected his popularity in Japan much. In his blog post, Kino notes:

Despite his numerous “revisionist” statements, the cosmetic surgeon who openly praises Nazi scientists has rarely been criticized by the Japanese media, most probably because he is one of the most influential sponsors of TV broadcasters in Japan.

Japan's Counter Racist Action Collective (C.R.A.C.), of which Kino is a member, also notes that Takasu, as the head of an extremely profitable network of cosmetics clinics in Japan, is an influential television sponsor, highlighting a recent and highly popular television advertisement for the clinics featuring entertainer Pikotaro, whose Pen-Pineapple-Apple-Pen Song became a viral hit in late 2016:

This CM footage shows you how much this Nazi doctor is popular and widely accepted by Japanese people. https://t.co/vrlAyn0VCL

NOTE: Since this article was published, Takasu Clinic has removed the video from YouTube.

By August 22, Kino published a news release the Simon Wiesenthal Center had sent to news outlets around the world, urging the American Academy of Cosmetic Surgery to take action against Takasu. The letter concludes by saying:

The last thing our world needs today is the embrace of Nazi ideology, under whose banner physicians carried out unspeakable crimes in the name of ‘progress.’ Takasu’s continued membership in the American Academy of Cosmetic Surgery should be canceled immediately.

There has been no official statement yet on the Simon Wiesenthal Center website, and no response from either the American Academy or Takasu, but the Jerusalem Post reported on the Wiesenthal Center‘s censure of Takasu on August 23, as well as in a number of Japanese online media outlets.

This is not the first time prominent Japanese media and business people have expressed fondness for the Nazi regime or been implicated in anti-Semitism. Earlier in 2017, APA Group was forced to apologize after an in-house publication left in guest rooms in Coast Hotels, the Japanese company's Canadian subsidiary, equated “international finance capital” with “Jewish capital.”

In November 2016, a Japanese pop group caused international outrage after its members dressed up in what looked like Nazi uniforms for a Halloween concert. And in 2002, a high-level civil servant was also criticized by the Simon Wiesenthal Center for referring to “money-grubbing ghoulish Jews” while discussing social and economic issues.

As for Takasu, even though he has made no mention of the Simon Wiesenthal Center's news release, he seems to have been caught off guard by Kino's blog post.

He took particular offense to the Twitter hashtag “Nazi clinic” (ナチスクリニック) or “nachisu” clinic, a play on the words “Takasu Clinic,” which sprung up in response. In a tweet on August 24, 2017, Takasu complained:

Take my eyes [off Twitter] for a moment, and a ton of falsehoods are made about me.

If you don't crush them right away, these little bastards will immediately start spreading falsehoods. It's too much of a pain in the ass to track down these good-for-nothing hard-to-find and hard-to-crush little parasites, but I will never forgive whatever crumb-bum launched this “Nazi Clinic” attack on me.

For the time being, Takasu, by all accounts, remains unapologetic about his statements, despite the overwhelming evidence of the Nazis’ atrocities, and despite criticism of his remarks both in Japan, and, increasingly, abroad.

This article has been updated to reflect that Kino Toshiki did not initially contact Simon Wiesenthal Center; instead, an anonymous Japanese netizen did.