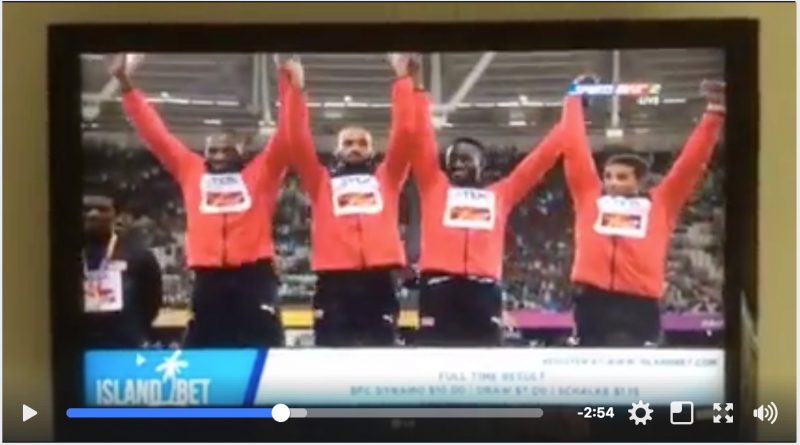 Screenshot from a NAAA TT video of the Trinidad and Tobago 4 x 400 relay team about to receive their gold medals at the 2017 IAAF World Championships in London, England, on August 13, 2017.

The 2017 IAAF World Championships, which ended on August 13, 2017 in London, England, left Caribbean netizens brokenhearted that Usain Bolt, widely acknowledged as the Greatest of All Time (GOAT), ended his international track and field career with a bronze medal in his signature event, the 100-metre dash.

Just as gut wrenching was the fact that the Jamaican track team failed to place in the 4 x 100-metre final, as Bolt pulled up during the last leg, unable to carry on due to injury. But the region's spirit was lifted when, seemingly out of nowhere, Trinidad and Tobago clinched the gold in the last event, the 4 x 400 relay.

The win didn't actually come out of nowhere, of course, no matter how surprised the commentators may have been. The team copped silver two years ago at the World Championships, and clearly had first place in their sights this time around. Facebook user and sports enthusiast Peter Samuel noted what a significant achievement the team's win was for the country:

CONGRATS to all of Team TTO's male quartet of [Jarrin] Solomon, [Jereem] Richards, [Machel] Cedenio and [Lalonde] Gordon who has just created HISTORY by winning the men's 4X400m at the World Championships being held in London in a New National Record and World Leading time of 2:58.12. Way to go GENTLEMEN.

The win marked the first ever gold medal for Trinidad and Tobago in the 4 x 400 event — the team dedicated their victory to the country, especially in light of the twin island republic's upcoming 55th anniversary of independence from Great Britain, which will be marked on August 31, 2017:

Facebook user Rose-Marie Ingrid Lemessy-Forde was thrilled with their performance. She posted an image of the leaderboard, noting that the Trinidad and Tobago team won in a world leading time: 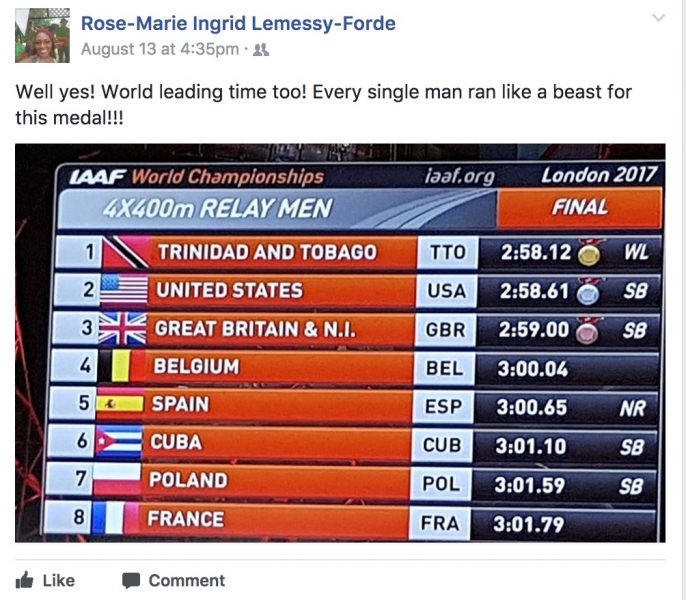 In a later status update, her heart was full after noticing the display of regional solidarity from the athletes — unity that continued online: 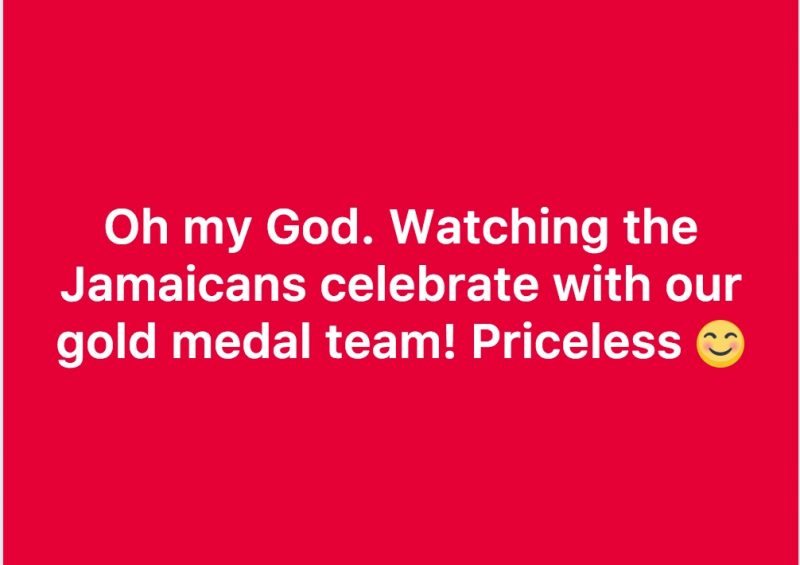 The joy was infectious. As Tillah Willah observed during her afternoon workout up Lady Chancellor Hill:

On CNC3 Television, Trinidad and Tobago's Facebook page, user Majestic Sandy was happy for something other than crime stories to dominate her newsfeed:

Congratulations! You've made us proud. Thanks for shining some light in the darkness that has been plaguing our country. ??

Other social media users praised the team's determination and hoped that the athletes would be aptly rewarded for their efforts — far more than the typical pronouncement of a national holiday.

It is common knowledge that the members of the national athletics team have had no government assistance for about three years. While the National Association of Athletics Administrations of Trinidad and Tobago (NAAATT) does attract some corporate sponsorship, the majority of these funds is put towards operating the association; athletes competing at world-class level often do so largely on their own steam.

In a public Facebook post, Peter Samuel made a point of posting a photo of Tobago-born Renny Quow, perhaps the most accomplished 400-metre runner to hail from the country, receiving his gold medal. Quow ran the heats and was therefore an indispensable part of the team:

To one and all, please let's don't forget Renny Quow, and the part that he played in helping Team TTO getting into the finals of the men's 4X4… Congratulations to all 5 gentlemen on a job well done…… Photo:- Team Manager Dexter Voisin presenting Renny Quow with his gold medal. 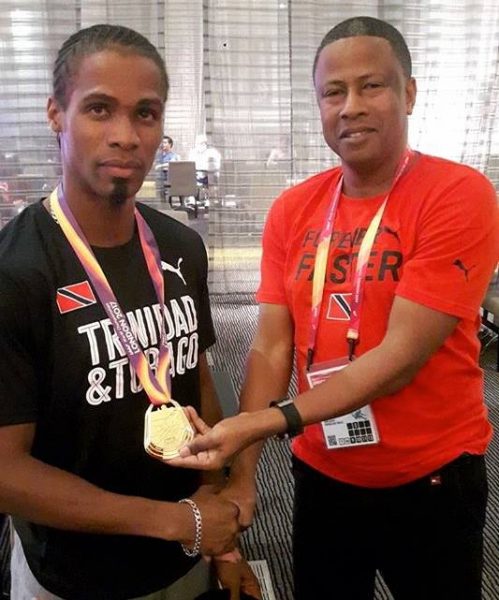 Some Twitter users were breathless over the excitement of the race…

While others were glad not to see the usual suspects on the podium:

Finally, Twitter user Nadine West summed up the emotions the region was feeling: