Is Rio de Janeiro at War? Its Residents Debate 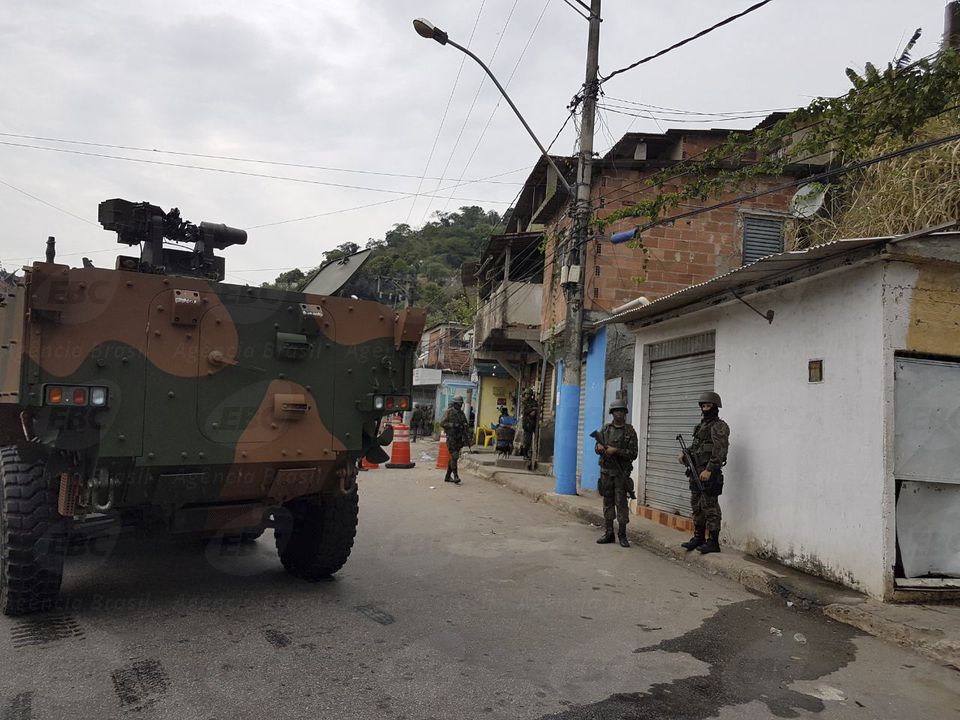 The Brazilian Army in an operation in favelas in Niterói, a city in the state of Rio de Janeiro, during the state crisis. Image by: Estado Maior (CML) via Fotos Públicas, CC-BY-NC 2.0

Everyday, newspapers all around Brazil are flooded with grim headlines about Rio de Janeiro, Brazil's second largest city and home to many of the images found on the country's postcards.

Some examples of these headlines read:

In 2017, with an economic crisis and public funds under strain, violence in Rio de Janeiro reached its highest levels in a decade. One NGO has even called on the UN to intervene.

These stories are becoming commonplace and it's unacceptable — or at least that's what the management of one local newspaper says. In an editorial dated August 16th, titled ‘This Is Not Normal’, newspaper Extra — famous for its detailed coverage of violence in Rio — stated that it will be creating a new section named “Rio's War”. All reports of violence from the city will now be published in that section. They explained the motives behind their decision:

EXTRA will continue to report the kind of crimes that take place in any big city in the world: homicides, robberies, sexual crimes… However, everything that deviates from the standard of civilised normality, and that we only see in Rio, will be on the war section pages. (…) this is our way of shouting: this is not normal! It is the alternative we have to avoid making our journalistic eye complacent in the face of barbarism.

In a four-minute video shared on Facebook, Extra’s editor-in-chief, Octávio Guedes, says the decision is not something to be proud of, but rather it's a sign of failure:

Extra must be the only newspaper on the planet that has a war section in a country that does not recognise the war.

In the same video, one of the paper's reporters says that according to the Public Safety Institute of Rio de Janeiro, there are 843 areas in the city that are under the control of criminal organizations.

We are aware that a war discourse, when distorted, can be used to cover up truculent acts by a police force that shoots first, asks later. But we defend the war based on intelligence, on fighting police corruption, and that has as its target not the civil population, but the economic power of mobs and all its associates.

Does the word “war” do more harm than good?

In an article published by The Intercept Brasil, journalist Cecília Oliveira counter-argues that by labelling the violence in Rio a “war”, the media might end up justifying a failed public security policy and even hindering police accountability.

This is not a war. This is the result of corruption, poor planning — as Extra itself has shown by analyzing Army operations in Rio — added to a lack of investment in human resources and intelligence and the historical and complacent neglect of public services. Just a reminder: the state of Rio de Janeiro is bigger than its capital. 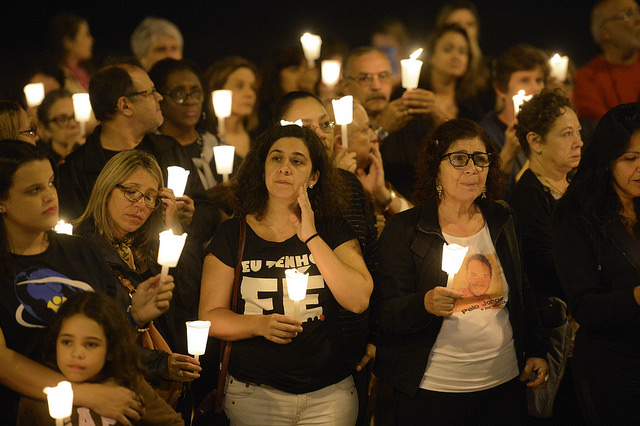 March for peace in Niterói, in the state of Rio de Janeiro, in homage of assassinated cultural promoter Rafael Lage. Image by: Fernando Frazão/Agência Brasil, published with permission.

For Cecília, to say that Rio de Janeiro is “the most violent place in Brazil” is innacurate: “22 out of the 30 most violent cities in Brazil are located in the North and Northeast regions, according to data from 2015 (the latest available). None of these are found in the state of Rio de Janeiro. When we look at homicide rates [by state], Rio ranks 16th”, she writes.

Extra is owned by Globo corporation, Latin America's largest media conglomerate, which, Cecília points out, has for decades been echoing the state's public security policies. Among these security policies was the creation of the UPP (Pacifying Police Unit), launched in Rio in 2003, whose goal is to deploy massive police force to ‘conquer’ a favela and establish a permanent unit there. While initially reducing violent deaths, the UPP came under fire in recent years after numerous reports of harassment and repression were filed by the poor communities these newly established police units were meant to protect.

On his Facebook page, journalist João Paulo Charleaux quoted an article he wrote in 2010 in which he discusses why the violence in Rio does not meet the necessary criteria — as defined by the Geneva Conventions — to be labeled a ‘civil war’. He says:

Besides the legal debate, there is a serious human consequence in saying there is a war in Rio. By doing this, society stimulates the State to act with means and methods that are typical of a war, entering in a ‘enemy’s’ territory, where a civil person is only a blur in the landscape, subject to ‘collateral damage’ and ‘lost bullets’.

War or not, residents of Rio's favelas continue to suffer. It’s been a week since the police climbed up the hill of Jacarezinho to avenge the death of an officer. In the midst of all the violence, another incident made the headlines: a fruit seller was killed after being shot by police from a helicopter.