My Complicated Relationship With Cockroaches 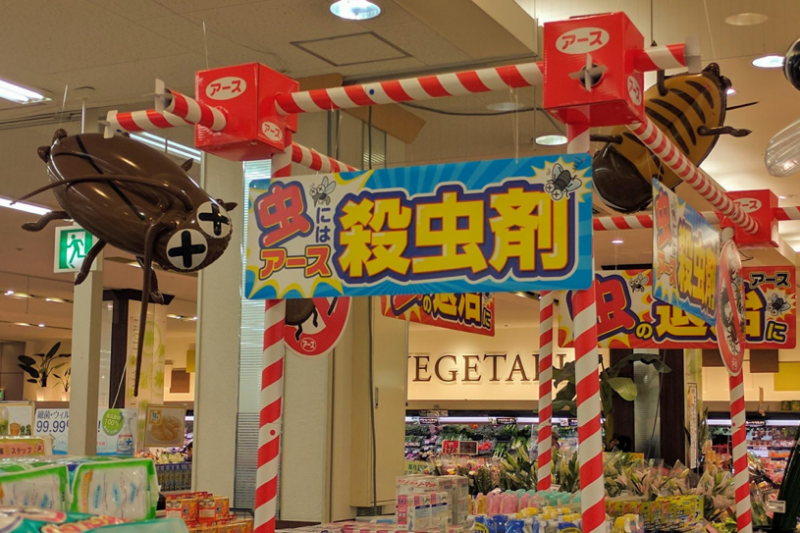 An typical early summer seasonal display for insecticide and cockroach traps at a Japanese supermarket. Photo by Nevin Thompson.

I'm proud of my ability to eliminate cockroaches. It's one of the most valuable skills I've learned since coming to Japan more than two decades ago, and I'm passing on the knowledge to my sons as part of a family legacy.

I had never seen a cockroach before coming to Japan in my early 20s. In the cool, dry corner of Canada where I grew up, there are very few insect pests. I had no idea what I was in for when I moved to Japan.

The first summer I lived there, I shared a house with a fellow teacher. It was full of odds and ends, a mountain of junk left by our predecessors. We weren't too bothered by that—neither of us was particularly clean and tidy. We left our dishes in the sink and our garbage in a corner of the kitchen. Such habits would have been fine back home, but in Japan, it was the beginning of our problems.

One sultry, sticky morning, I woke up to find a long column, about 20 feet long, of tiny black ants trooping through a crack under the front door, up through the entry hall, and into the kitchen. The line of ants climbed up onto the counter, where they were painstakingly carting bread crumbs and grains of soggy cooked rice and white sugar back outside. I got a dustpan, swept up the ants and dumped them outside. Then I went to work.

When I got home the ants were gone, but some other critter had strewn garbage all over the kitchen, with a discarded mackerel carcass as the centrepiece. I heard a noise upstairs. I went to investigate.

There was something in my room. A cat. I had left my bedroom window open, allowing a stray to get into our garbage. It was cowering in the corner of my messy room. I ran downstairs and grabbed a butterfly net a previous tenant had left behind. I gently scooped up the cat, took it outside and released in a vacant lot up the street. I then got to work cleaning up the stinking mess in the kitchen.

And then the cockroaches came.

If you've never seen a cockroach, imagine a creature right out of a David Cronenberg body horror movie. Glistening black or turd-brown body. Waving antennae and spiked legs. And a deeply unsettling way of zig-zagging around a room in search of a bookcase to escape behind or a pile of papers or dirty clothes to hide under. But what is most distressing is the sheer size of a full-grown cockroach. The ones that terrorize the Japanese are big—several centimetres long, and, unlike a house fly, a moth or a jumping spider, cannot be ignored. They must be dealt with if you ever want to sleep soundly again.

I encountered my first cockroach the day after the cat ate the garbage. It was dog-vomit brown, and it scurried along the wall under the kitchen table. I grabbed a coffee cup and managed to capture it, its antennae sticking out from under the edge of the cup, waving frantically. Now what?

I slid a piece of paper under the cup, grabbed the wriggling cockroach and dumped it in the toilet. It flailed about and wiggled its legs as I flushed it out of sight. I looked at the coffee cup. A bit of antenna was still stuck to it. I threw that away too.

But it was the beginning of an onslaught. Over the summer, cockroach after cockroach appeared in every corner of the house, under futon mattresses on the floor, in cupboards, on the TV console. Some were big and black, and, as a defense measure, would fly right at my face when I tried to corner them. I ran out of coffee cups and water glasses. I didn't want to swat the cockroaches with a rolled-up newspaper—I had read that if you did that you might spray their eggs all over the house.

Fall arrived, and I forgot about the roaches. I eventually got married and moved in for a time with my wife's parents. My father-in-law schooled me on some of the basics of roach-proofing, notably:

I didn't take his advice, so during that summer we lived with them it was a constant battle with bugs in our section of the house. I was still scared of egg-spraying, and continued to catch them with a cup or a bowl, kept handy in a cupboard in case of a cockroach emergency. On a trip back home to Canada during a Japanese summer, I was luxuriating in the cool, crisp air when I was struck with a panic attack: did I unwittingly bring back cockroaches to Canada in my suitcase? Could there, at this very moment, be a cockroach creeping around, ready to set up shop in my hometown?

In recent years I have become even more determined to confront the cockroach menace head on, mostly because my kids are deathly afraid of the big, shiny black bugs. Besides researching online forums about how to roach-proof my house in Japan, I've consulted the literature, such as the excellent Understanding and Controlling the German Cockroach. I've learned that cockroaches are nocturnal and live together in nests called harborages (if you see a cockroach in daylight it means the harborage is full). They need shelter, food, and water to survive. Take away one of these, and it's much easier to defeat them. Cockroaches also generally stick close to walls, and choose the same route when searching for food. They also defecate frequently, and other roaches use this trail of poo to navigate. Cockroaches eat the feces of other cockroaches, and will cannibalize their fellow cockroaches, too. In the process of these discoveries, I became acutely aware that the appearance of one cockroach meant there were dozens, if not hundreds, lurking out of sight.

I decided to execute a strategy of defense in depth. First, I identified likely intrusion points into our house: the door to the back garden, the lavatory, and the shoe cabinet in the entry hall, where I had regularly discovered cockroaches. Next, I set out “roach motels”—glue traps baited with a pheromone melange—in each of these locations. I then set out glue traps at key transit points throughout the house, including corners of the kitchen, and in the small room where we have our meals. The ultimate goal was to use these concentric rings of glue traps to defend the large, air-conditioned tatami room where we all slept together. No cockroach could ever be allowed to set spiky foot in there.

Besides keeping the kitchen clean and living spaces free of clutter, the final element of my defensive strategy was setting out poisoned bait along the cockroaches’ known transit routes. The cockroach's tendency to dine on its own feces as well as dead cockroaches was both its strength, and its liability. Once a cockroach eats poisoned bait, it either dies, or returns to the harborage. If it dies, its poisoned corpse is eaten by other cockroaches, who then die themselves. If the poison doesn't kill the roaches outright, they take it back with them to the harborage, where it is ingested or absorbed by members of the colony. Theoretically, with enough bait it is possible to cause a colony to collapse.

This year, the strategy seems to be working. I patted myself on the back: the glue traps were gathering lint, but nothing else. We've seen a few roaches, all in the middle of the night, but I quickly hunt them down and whack them with a rolled-up newspaper.

I've started to wonder about my revulsion for cockroaches. While there is nothing remotely human about them, when running away to avoid my wrath they do seem to possess some human characteristics. It's almost as though they're looking over their shoulders at me, then scanning around for some way to escape, in a very human kind of way.

A friend of mine says he no longer kills cockroaches (he ‘s also stopped playing shogi, the Japanese version of chess, as he no longer wants to compete with and defeat others). He feels sorry for them, and instead catches them and places them outside.Of course, he lives out in the country surrounded by rice fields, where he has an advantage I will never have—a resident Huntsman spider in his back garden, nearly ten centimetres across, who takes care of any cockroaches it comes across.

As for me, my war against cockroaches has not come without a cost. The other day, doing my regular morning roach motel inspection, I noticed something quite un-cockroach-like stuck in a glue trap. It was the soft, almost gelatinous body of a small, aquamarine gecko. It was dead.

“Agh!” my wife exclaimed. “You killed it! They protect the house!”

Known in Japanese as yamori, or “protector of the house” (家守), geckos feast on cockroaches and other insects. Now there was one less to keep the cockroaches away.

So, I've put away my glue traps for good. Hopefully, the cockroaches will not come back.