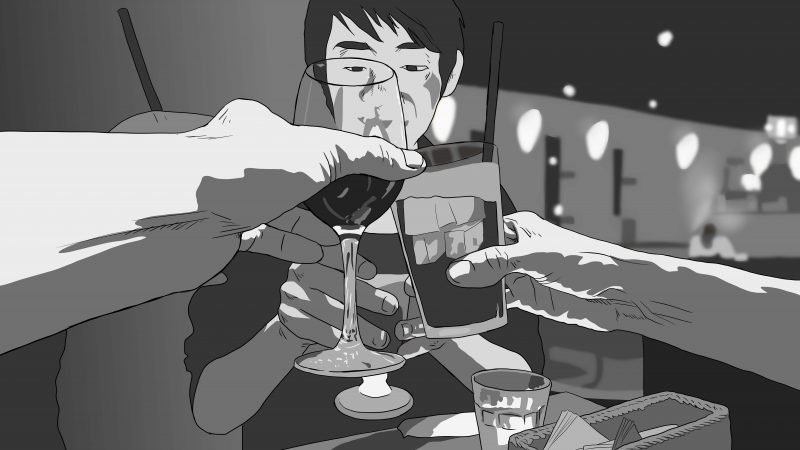 Entertaining potential customers in an urisen bar. Image courtesy of ‘Boys for Sale.’

The new documentary “Boys For Sale” explores male sex work, or “urisen” (ウリ専) as it is called in Japanese, in Tokyo's biggest hub for gay culture and nightlife, Shinjuku's “2-chome” neighborhood.

The film features candid interviews with young men who work in bars and brothels and are paid to have sex with other men and touches on topics such as sexuality and sexual consent in Japanese culture. At times, the documentary uses animation to protect the identity of some interviewees and illustrate what happens during a sexual encounter with a client.

Different men interviewed in the documentary have slightly different explanations as to what urisen is: “Spending time with a boy”; “We offer opportunities for people to meet people. And if a customer likes one of us, it might lead to something else”; and “Urisen is selling and buying… We sell our bodies and men buy us.”

Many of the young men interviewed in the documentary say they fell into the work because they needed money to help out with family debts, or because they had drifted into Tokyo looking for a job but found nothing else available. One interviewee said he had gone to Tokyo after the 2011 tsunami that had destroyed his hometown in Iwate Prefecture. Generally speaking, male prostitution in Japan is permitted, since under the law, sex is exclusively defined as vaginal intercourse, so other paid sexual acts are not illegal. 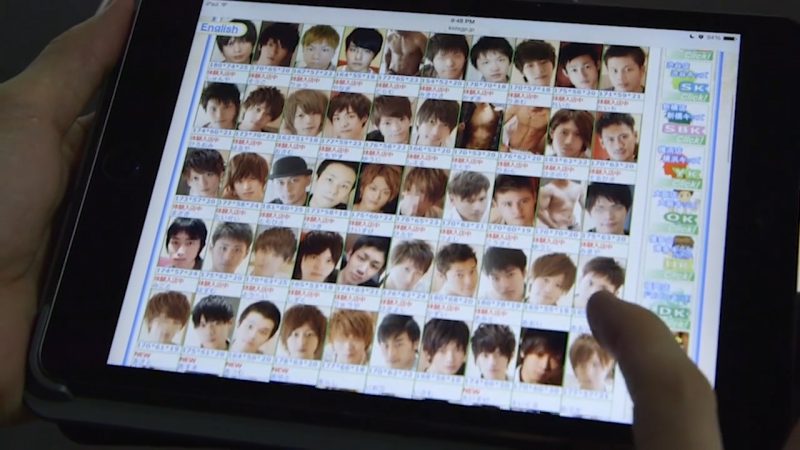 Webpage showing selection of male sex workers at a bar in Japan. Image courtesy of ‘Boys for Sale.’

According to the documentary, as part of their job, young men typically work at a bar where they meet potential patrons. They can “earn 5 dollars for 30 minutes” for sitting next a customer in a bar, and more if they persuade the customer to have sex with them in hour-long sessions in small, private rooms adjoining the bars. The men start at 4 p.m. and work for eight to 10 hours a night, and report earning from ¥150,000 and ¥850,000 (from US$1,350 and $7,800) a month, although up to 50% of this income goes to the bar that employs them.

Many of the young men do not receive any sort of training or testing from their employers to protect themselves against sexually transmitted diseases (“This is one of the only developed countries where HIV is growing,” notes one interviewee), and, out of deference to the wishes of the customers, condoms are rarely used. In fact, one bar operator states that sex workers are taught that “Showering together (with the customer) prevents STDs.”

Interviewees tell other troubling stories in the documentary.

“The clients are powerful,” says one interviewee. “I end up giving in… So no matter what the customer forces me to do. I cannot really refuse.”

Another interviewee reports being blindfolded and gang-raped. He continued to work at the same bar afterward.

“Boys for Sale” was made by an international team of filmmakers from the United States, the United Kingdom and Japan. Building trust with the interviewees was key, Ian Thomas Ash, the executive producer, told Tokyo Weekender. The filmmakers spent a full year going to different urisen bars in Shinkuku, getting to know the community. “[P]eople had come to know us and they understood that this wasn’t just parachute journalism,” he said.

As a result, the documentary provides a humane and empathetic look at the lives of men working in Tokyo's urisen trade.

The documentary premiered at a film festival in Germany in May 2017, and will be screened at a series of festivals around the world, including the 2017 Durban Gay and Lesbian Film Festival on August 26 and September 1, 2017. The film's fall 2017 schedule can be viewed here, and a Japanese premiere is expected to be announced shortly.

A trailer for “Boys for Sale” can be watched here:

“Boys for Sale” provided Global Voices with an advance copy of the documentary for this article.